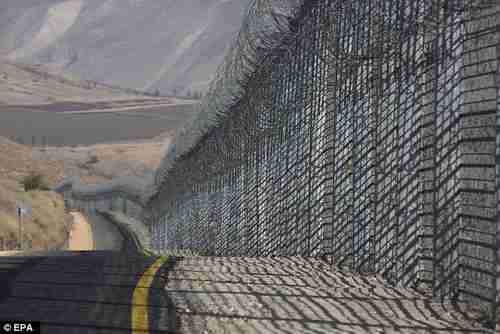 This fence marks the boundary between Syria and the Golan Heights, which Israel annexed in 1981 (EPA)

Syria’s news agency SANA reported that Israel’s warplanes struck a military arms depot in Syria near Damascus. The arms depot is believed to be run by Lebanon’s Hezbollah, which is controlled by Iran. The airstrikes took place before dawn on Thursday, and resulted in massive explosions that could be seen and heard for miles.

Israel has taken no sides in the war in Syria, but has struck weapons depots and convoys from time to time in the past when it believes that the weapons are advanced and are intended for delivery to Hezbollah in Lebanon to be used against Israel. The advanced weapons may include precision rockets, advanced anti-aircraft missiles, surface-to-surface missiles and surface-to-ship missiles.

Usually, Israel refuses to either confirm or deny that it was responsible for any missile attack, but on Thursday, Israel’s intelligence minister Israel Katz made a statement that comes very close to confirming that Israel was responsible:

I can confirm that the incident in Syria corresponds completely with Israel’s policy to act to prevent Iran’s smuggling of advanced weapons via Syria to Hezbollah in Iran. Naturally, I don’t want to elaborate on this.

The prime minister has said that whenever we receive intelligence that indicated an intention to transfer advanced weapons to Hezbollah, we will act.

Russian foreign ministry spokesman Maria Zakharova mildly condemned the Israeli action, but suggested that they might be “justified”:

Gross violations of Syrian sovereignty, no matter how they are justified, are unacceptable. Moscow condemns acts of aggression against Syria.

The most serious incident of this kind occurred in mid-March, when an Israeli attack on a weapons convoy traveling to Lebanon was destroyed by Israeli warplanes. There was an unprecedented missile clash over Jordan when Syrian Russian-made S-200 ground to air missiles targeted the Israeli planes without success, but were shot down over Jordan by Israel’s Arrow 3 anti-missile defense system.

These Israeli airstrikes have been going on for years, with an occasional diplomatic condemnation from Russia, like the mild condemnation quoted above, but no military response, although Russia could presumably attack Israel’s warplanes with an advanced anti-missile system. It’s widely believed that Russia and Israel have an agreement to allow these airstrikes since they have the purpose of preventing a larger regional war between Hezbollah and Israel, which would not be to Russia’s liking. BBC and AFP and SANA (Damascus) and Jerusalem Post

Israeli analyst: A new war with Hezbollah might involve all of Lebanon

In 2006, Israel and Hezbollah fought a war that was disastrous for both sides, as it ended in stalemate after a great deal of mutual destruction.

In an interview on the BBC, Giora Eiland, former head of the Israeli National Security Council, discussed Israel’s strategy with regard to the Syria war and a possible future war with Hezbollah. He said that the number one threat that Israel faces is not the so-called Islamic State (IS or ISIS or ISIL or Daesh), especially since ISIS is diminishing in power because of attacks on it in Syria. The number one threat that Israel faces is a new war with Hezbollah (my transcription):

I think that we have to understand something that is much more important than this kind of very delicate game, and this is what might happen maybe in this summer if the problems in Syria are not necessarily resolved but if Hezbollah, Iran, the Syrians and the Russians feel that they are are the winning side, and Hezbollah might begin to think about the next phase — the next phase might be to find a reason to be in full confrontation with Israel, and I cannot exclude the possibility that Iran will push them to do something like this.

And this is something that might bring the whole Middle East to be in a very different situation. And the main message is this: contrary to all previous times, when Israel and Hezbollah had some kind of direct confrontation between them, this time if a fire is launched from Lebanon against Israel, it will lead not only to confrontation with Hezbollah, but to a real confrontation or even a declared official war between Israel and Lebanon. And this is something that might change the regular stories of the Middle East, and I think that Israel might be taking such an approach, because the only way to end the next cycle of violence quickly is to attack Lebanon, and to threaten that the whole state of Lebanon might be devastated, and this might be the only to get the international community to intervene, and to stop the aggression. And this is a scenario that cannot be excluded…

Number one threat for Israel is not ISIS but — the threat of ISIS is diminishing because of the success of others. If Iran feels it’s winning in Syria, it might take advantage of it and send some of its proxies to Lebanon and also the Golan Heights, and might encourage Hezbollah to open another confrontation with Israel. If Hezbollah decides to fight Israel, and since they have missiles that can cover all of Israel, and the number of missiles are tens of thousands, many of them are accurate weapons, then Israel might face a problem that we never faced in the past, and it might lead Israel to take some extreme measures.

Generational Dynamics predicts that the Mideast is headed for a major regional war, pitting Sunnis versus Shias, Jews versus Arabs, and various ethnic groups against each other. This is coming with 100% certainty, irrespective of what Israel and Hezbollah do. AP and LA Times