US will ‘quickly’ arm Kurdish militias in Syria, despite Turkey’s opposition 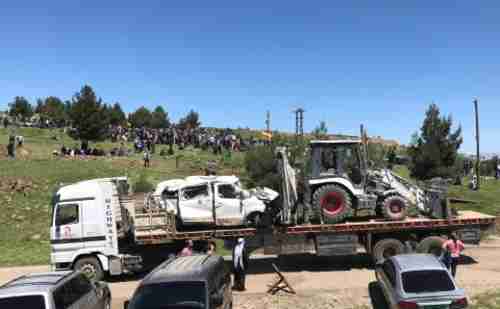 The U.S. military is moving quickly to get weapons into the hands of the Kurdish People’s Protection Unit (YPG) despite opposition from Turkey. The YPG will use the weapons in its fight against the so-called Islamic State (IS or ISIS or ISIL or Daesh), and the effort to eject ISIS from its stronghold in Raqqa.

The weapons would include small arms, mortars, heavy machine guns, shoulder-fired weapons and ammunition. According to the military, the selected weapons will address the specific threats that ISIS poses, such as the Vehicle Borne Improvised Explosive Devices (VBIEDS), or car bombs of the type that ISIS has used to break up assaults.

The US considers the YPG to be the best and most effective fighting force in Syria versus ISIS. On Wednesday, the Syrian Democratic Forces (SDF), comprising a majority of Kurdish fighters and a minority of Arab fighters from the Syrian Arab Coalition, announced that they had recaptured the town of Tabqa from ISIS. They had announced last week that they had recaptured 90% of Tabqa, and now say that have taken the rest. Tabqa is about 45 km west of Raqqa, which is the final target of the current assault. Military.com and The Hill and Rudaw (Kurdistan)

Turkish officials furious at plans to arm the Kurds

On April 25, Turkey’s warplanes bombed Kurdish YPG militias that were part of the US-led coalition fighting ISIS, killing or wounding dozens of YPG fighters. Some Turkish officials are threatening additional airstrikes against Kurdish militias if they are armed by the US military.

The US military has been sending several hundred additional American troops to the region mainly to protect the Kurds from Turkey’s military.

The YPG are the Kurdish militia linked to the Kurdistan Workers’ Party (PKK), which has for decades been a separatist insurgence in Turkey. The PKK has been conducting number terrorist bombings and other attacks, killing more than 1,200 people in Turkey, according to Turkish media.

Turkish officials consider arming the Kurds to be an existential threat to Turkey. They say that the PKK group has begun adopting a “franchising strategy,” in the same way that al-Qaeda has for years “franchised” al-Qaeda on the Arabian Peninsula (AQAP), Al-Qaeda on the Islamic Maghreb (AQIM), and so forth.

A US army spokesman, Col. John Dorrian, tried to reassure the Turks:

All of these items are going to be metered out to accomplish specific objectives for the isolation and liberation of Raqqa.

We’re going to carefully monitor what’s being provided and what it’s used for, and we are completely committed to make sure that it’s being used for exactly the purpose that we intend.

However, Turkish politicians point out that it’s particularly humiliating to Turkey that this announcement was made while Turkish officials are in Washington, preparing for a visit by Turkey’s president Tayyip Recep Erdogan next week on May 16. Some are recommending that Erdogan cancel the visit.

I’ve said in the past, the factions fighting in Syria today – the US, the Syrian regime, Russia, the Kurds, the Turks, and the “moderate” regime opposition – all these factions are united today because they are all fighting the common enemy, ISIS. But once ISIS is defeated in Raqqa, ISIS’s headquarters, then all bets are off. In particular, unless the American troops protecting the Kurds from the Turks are going to be stationed there forever, we can be certain that the Turks will be fighting the Kurds again. Anadolu (Turkey) and Washington Post and Hurriyet (Turkey)