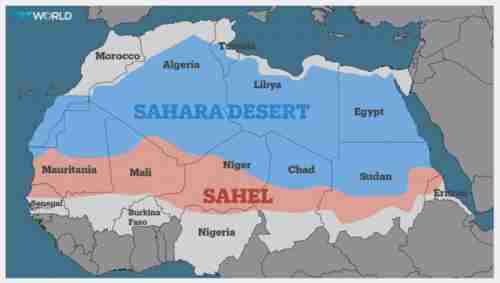 France’s new president Emmanuel Macron fulfilled a campaign promise on Friday by visiting the French peacekeeping troops in Mali, in his first official trip outside Europe since taking office less than a week ago.

There are 4,000 French peacekeeping troops in Operation Barkhane, France’s largest overseas operation, begun in 2014 by then-president François Hollande, with a vow to “wipe out armed terrorist groups.”

The French troops are in five West African nations in the Sahel region, which is a strip of land running horizontally across Africa from the Atlantic Ocean to the Red Sea. Generally speaking, it separates the Arab north from Black Africa, along a fault line that often separates Muslims north of the Sahel from Christians south of the Sahel. The Sahel cuts through the five countries with French peacekeeping forces: Mauritania, Mali, Burkina Faso, Niger and Chad.

Macron said that France would be “uncompromising” in its fight against militant Islamists in Mali and the other nations, and vowed that France’s military operations would continue until the jihadists are eradicated. According to Macron, “Operation Barkhane will only stop when there is no more Islamist terrorism in the region.” France 24 and Radio France Internationale and BBC

The three largest transnational jihadist groups in Mali are al-Qaeda in the Islamic Maghreb (AQIM), the Movement for Oneness and Jihad in West-Africa (MUJAO), and al-Mourabitoun, created by Mokhtar Belmokhtar.

However, probably the most important terrorist group in Mali is Ansar Dine (Defenders of Faith), a local terrorist group from the Tuareg ethnic group. The Tuaregs live in a region spanning northern Mali, large parts of Algeria and Niger, and the southwestern portion of Libya.

The Tuaregs had what arguably might be called a “lucky break” in 2011, when Libya’s dictator Muammar Gaddafi was killed. To protect himself, Gaddafi had armed and employed mercenaries, many of whom were Tuareg. When Gaddafi died, the Tuaregs were left with a big weapons cache, which they used to begin a separatist rebellion in Mali.

Central Mali has seen a sharp increase in jihadist attacks and ethnic violence since 2015. The United Nations has had an existing peacekeeping force of 12,000 troops in Mali called MINUSMA since July 2013.

The UN is deploying a rapid intervention force of Senegalese troops to central Mali. China is sending a peacekeeping force of 395 troops to Mali before the end of May.

However, Canada’s prime minister Justin Trudeau is receiving criticism for failing to meet his campaign promise of providing to the UN 600 Canadian troops for peacekeeping. Instead, has kept postponing the question, refusing to say whether or not the Canadian troops would be supplied. Trudeau’s equivocation is causing problems for other countries supplying peacekeeping troops. As one foreign diplomat said, “Just make a decision. Even if it’s a no, we need a decision.” TRT World (Istanbul) and News 24 (South Africa) and Premium Times (Nigeria) and National Post (Ottawa)

Question: What do Trump and the Mainstream Media have in common with Ronald and Nancy Reagan?

Answer: They’re obsessed with each other.