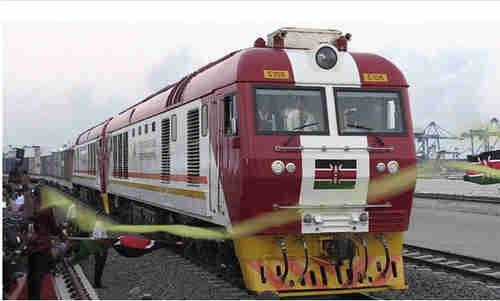 Kenya on Wednesday launched a new railway line call he Madaraka (Freedom) Express, linking Kenya’s Port of Mombasa on the India Ocean to the capital city Nairobi. The word “Madaraka” commemorates the day that Kenya became independent in 1963.

The new 380-mile Standard Gauge Railway (SGR) line is expected to be good for business. Cargo charges from the Port of Mombasa to Nairobi will cost about $500 per container and take 8 hours transit time. This is a significant saving over transit by road, which costs $900, and requires 24 hours. The train can carry 1,260 passengers.

The new SGR was built with Chinese money and Chinese workers. China’s state-owned Export-Import Bank loaned Kenya $3.6 billion for the project, which Kenya is expected to repay out of revenues. However, some analysts are raising concerns that the SGR will be a “white elephant,” leaving Kenya with enormous unpayable debts, as has already happened in Sri Lanka.

Even worse, the cost to build the Kenya railroad has been extremely expensive even by regional standards. The cost of the railway was roughly twice as great as another China-built railway, the Djibouti-Ethiopia train, suggesting the possibility of corruption.

Perhaps Djibouti and Ethiopia were able to drive a harder bargain with the Chinese, because China is also building a naval and air base on the strategic Red Sea port in Djibouti, and the railway connects that port to Ethiopia’s capital city, Addis Ababa. The site of the Chinese base is about 6 miles from an existing US base in Djibouti. China has defended the base construction, citing evacuations of Chinese nationals from nearby Yemen and Libya during recent conflicts.

A history that was first started 122 years ago when the British, who had colonized this nation, kicked off the train to nowhere… it was then dubbed the ‘Lunatic Express’…

Today 122 years later, despite again a lot of criticism, we now celebrate, not the Lunatic Express but the Madaraka Express, that will begin to reshape the story of Kenya for the next 100 years. I am proud to be associated with this day…

The drop in cost of freight and fares will make Kenya a more attractive investment destination. More investors will lead to more jobs and growth in our economy.

Another issue related to the railway is that it crosses Kenya’s Nairobi National Park. Built by British settlers in 1946, this is a wild animal park on the fringes of Nairobi, and is a leading tourist attraction, and is responsible for a significant amount of Nairobi’s income.

However, wild animals occasionally migrate out of the part into nearby homes and farms. With the SGR right through the middle of the park, these visits by wild animals have increased. Earlier this year, two lions escaped from the park and had to be shot, as they were threatening humans. This has raised an outcry from environmentalists, who are demanding a number of changes, including raising the railway above the park, so that animals can move freely. The Shanghaiist and Radio France Internationale and African Business Magazine (5-May) and UPI (18-April) and Huffington Post

There is no economic or financial case for the railway, according to a World Bank report. There’s a very realistic fear that the SGR will generate far less income than is necessary to repay the China’s $3.6 billion loan.

We have already seen exactly these problems in Sri Lanka. In 2009, China invested $1.2 billion in Sri Lanka’s Hambantota seaport. Sri Lanka had expected to repay the debt through profits earned by the port, but the slowdown in trade throughout the entire region in the last few years has meant that Sri Lanka has been unable to repay the debt, and now China has essentially taken over the port in lieu of repayment of the debt, resulting in violent protests by Sri Lanka’s Buddhist monks and anti-government protesters. China will own a significant piece of Sri Lankan real estate, and there will be a large Chinese community that will be in Sri Lanka forever.

Professor Samuel Nyandemo of the University of Nairobi’s School of Economics refers to China’s projects as “debt trap diplomacy”:

Extending loans for infrastructure projects is a good thing. But look at the projects being funded. Most of them are meant to open markets for Chinese goods in strategically-located countries and increase their access to natural resources.

If there is one thing China is truly good at, it is using its economic assets to advance its geostrategic interests, which has left countries snared in a debt trap that makes them vulnerable to Chinese influence.

In fact, however much revenue the new SGR railway generates, it will have a significant negative economic impact on Kenya. That’s because there is an existing Nairobi-Mombasa railway run by Rift Valley Railways (RVR). Amazingly, Kenyan authorities are now requiring that a minimum of 40% of the cargo traveling between Nairobi and Mombasa must be taken by the new SGR. This is presumably going to be a financial disaster for RVR, but it also means that Kenya will have little or no revenue gain from the new railway, since it will be taking much of its business from the old railway.

When Kenya’s president Uhuru Kenyatta recently visited the One Belt One Road (OBOR) forum in Beijing, he signed a contract borrowing another $3.5 billion from China for an extension to the SGR that was just launched. Critics say that thanks to the president, Kenyans will have to labor for China for years to come. Kenya Standard Media (28-May) and Times of India and African Business Magazine (23-May)