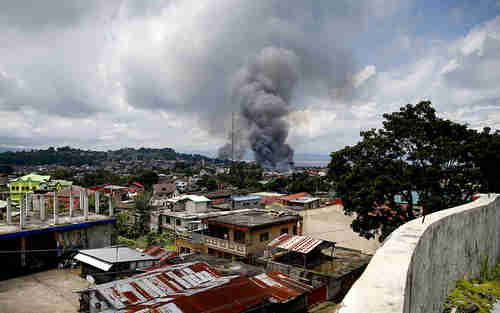 US special forces are providing assistance to Philippine troops fighting the radical Islamist Maute rebel group in the southern city of Marawi. The help comes after a growing crisis in Marawi, on the island of Mindanao, and one day after the bloodiest day of battle so far, when 30 Philippine soldiers were killed and 40 wounded on Friday in a 14-hour battle. Dozens more soldiers were killed on Saturday, as fighting continued.

The drama began on Tuesday May 23 with a botched operation in Marawi City by the Philippine armed forces to capture terrorist leader Isnilon Hapilon, the leader of the Islamist terror group Abu Sayyaf, which has recently pledged allegiance to the so-called Islamic State (IS or ISIS or ISIL or Daesh).

Instead of quickly capturing Hapilon, the soldiers were caught completely by surprise when they were met by dozens of terrorists in the Maute terror group, who were backed up by foreign fighters from Malaysia, Singapore, and Indonesia. The army now believes that it unwittingly interrupted a plan by the Maute group to take over the city and sack it.

At first, President Rodrigo R. Duterte said that the operation would be concluded quickly and that there was no ISIS involvement. On Wednesday, the next day, Duterte declared martial law, saying that the island of Mindanao was under attack by ISIS. The army sent in reinforcements, as thousands of residents of Marawi fled from the city. On Wednesday morning, the army said that no airstrikes would be required. However, airstrikes began on Wednesday afternoon.

As the days went by, Duterte declared one deadline after another to recapture Marawi, and so far none of those deadlines has been met.

In the attack, some 500 militants seized large parts of the city while burning buildings, cutting power and communications lines and taking hostages. The fighting has so far left dozens of security forces, 20 civilians and hundreds of militant fighters dead. The Maute militants still control parts of the central city and have as many as 2,000 hostages, according to the Philippine military.

There is currently house to house fighting going on. Air strikes have flattened the city. The former city of 200,000 has been virtually emptied, although many people are trapped with no food or water. Duterte’s next deadline for recapture of the city is Monday, June 12.

History of Abu Sayyaf and Maute Group in the Philippines

A year ago, Philippines president Rodrigo R. Duterte said he wanted nothing more to do with the United States, and that he would henceforth work with China. I wrote at the time that this vow would never last because the Philippine people would not let it. The United States has about a 90% favorability rating, while China has more like a 50% favorability rating. Duterte has had to back off from his vow time after time, and now with the growing Islamist insurgency, he has decided that he needs American troops after all, at least in an advisory capacity.

The radical Islamist Abu Sayyaf Group was founded in 1991 and named after a mujahideen commander in Afghanistan. It pledged allegiance to Osama bin Laden and al-Qaeda. US forces were deployed to the area in 2002 to help the Philippines military deal with Abu Sayyaf, although the terror group continued. It became known for a series of kidnappings of foreigners for ransom and for beheading their captives.

In 2014, the group split into rival factions over the decision of its leader Isnilon Hapilon to terminate its allegiance to al-Qaeda, and to swear allegiance to ISIS.

The Maute Group was formed in 2012 by Abdullah Maute (aka Abu Hasan) and his brother Omar Maute. They began terror acts in 2013, and began a relationship with Abu Sayyaf in 2015. Today, Abu Sayyaf and the Mautes have a geographic reach that jihadist groups never had before.

Today, Abu Sayyaf and the Maute group are able to recruit new fighters from the entire region — not just the Philippines, but in the large Muslim populations in Indonesia and Malaysia.

Furthermore, hundreds of jihadists fighters from the region have gone to Syria to fight Syria’s president Bashar al-Assad for his genocidal acts towards Syria’s Sunni population. With ISIS seemingly near defeat in Syria’s Raqqa and Iraq’s Mosul, it’s believed that many of these fighters will return to the Philippines, Malaysia, and Indonesia, and that terrorist actions are going to grow significantly.

The army has claimed that the Maute brothers were killed on Friday in an airstrike, but this has yet to be confirmed. Reuters and BBC (31-May) and Philippine Star (29-May)