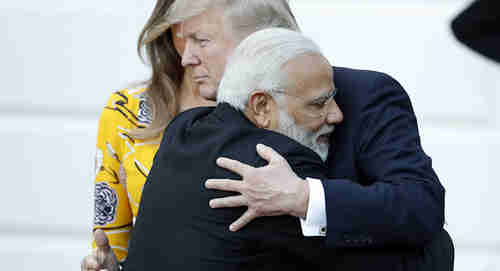 Narendra Modi and Donald Trump hugging during their meeting (AP)

Decades of disputes on the Himalayan border between China’s Sikkim state and China’s Tibet province were renewed this month in more than ten days of confrontations between Chinese and Indian troops.

The confrontation began early in June. China accuses India of sending border guards to cross into what China calls its “sovereign territory” in Sikkim, and said that the guards had “obstructed normal activities” by Chinese forces building roads connecting coal mines.

It remains unclear whether this flare-up is the fault of low-level Indian troops or a tentative strategic move made by the Indian government. Whatever the motive, China must stick to its bottom line. It must force the Indian troops to retreat to the Indian side by all means necessary, and China’s road construction mustn’t be stopped.

India’s national confidence has been greatly boosted with its GDP rising to fifth in the world. The fact that the US and West are willing to woo India to counterbalance China has particularly added to Indians’ sense of strategic superiority.

Some Indians believe the US and Japan are building a circle to contain China, and India has an advantage over China by choosing whether to join this circle. Therefore, they can indulge themselves on issues including border disputes, while China has no choice but to make concessions…

China avoids making an issue of border disputes, which has indulged India’s unruly provocations. This time the Indian side needs to be taught the rules.

India cannot afford a showdown with China on border issues. It lags far behind China in terms of national strength and the so-called strategic support for it from the US is superficial. China has no desire to confront India. Maintaining friendly ties with New Delhi is Beijing’s basic policy. But this must be based on mutual respect. It’s not time for India to display arrogance toward China. India’s GDP is only one-quarter of China’s and its annual defense budget is just one-third. Having a friendly relationship and cautiously handling border issues with China is its best choice.”

In retaliation, China has blocked the entry of 400 Indians making an annual pilgrimage to a holy site in Tibet.

Following a policy of downplaying border conflicts, India has been relatively silent about this month’s confrontation. An Indian media story entitled “India pushes back Chinese Army in Sikkim” says:

A standoff running into more than 10 days now between Indian and Chinese troops has led to tension on the eastern frontier. There was also a scuffle as Indian troops pushed back their Chinese counterparts who made attempts to enter Indian territory at Doka La general area in Sikkim.

Sources said the confrontation began about two weeks ago but a flag meeting was called on June 20 after two earlier attempts failed.

“The situation is still tense,” said a government official.

There are reports of two Indian bunkers also being damaged.

There is an ill-defined border some 4,000 km (2,500 miles) between China and India, of which 220 km fall in Sikkim. There was a major border war in 1962, and there have numerous minor clashes and incursions since then, although nothing has been settled.

The destruction of two Indian bunkers is a Chinese military response to India’s continuing buildup of its military infrastructure in the Himalayas, and the apparent planning of an effective counter-thrust in the event of a conflict.

Analysts say that China has exhibited greater aggressiveness along the border since April of this year, when the Dalai Lama visited a region of northeast India claimed by China. Global Times (Beijing) and DNA India (New Delhi)

Some analysts believe that China provoked the military confrontation in Sikkim because of the planned Tuesday meeting of India’s prime minister Narendra Modi with President Donald Trump in Washington, and because news stories had signaled greater military cooperation between India and the US, as well as seeing China as a common challenge.

The major military outcome of the meeting was the Trump administration’s approval of the sale of 22 Guardian maritime drones to India, worth about $2 billion. India had requested to buy the drones late last year, but President Barack Obama left the decision to the new administration. The drones will be unarmed and will be used for gathering intelligence over the India Ocean.

It is against American policy to sell an armed drone to a non-NATO country. India has indicated that it may purchase armed drones from Israel.

The joint statement following the meeting between Modi and Trump did not mention China by name but set out principles that are “central to peace and stability” in the Indo-Pacific region. These principles were clearly directed at China, with additional text specifically directed at North Korea:

In accordance with the tenets outlined in the U.N. Charter, they committed to a set of common principles for the region, according to which sovereignty and international law are respected and every country can prosper. To this end, the leaders:

The leaders strongly condemned continued provocations by the Democratic People’s Republic of Korea (DPRK), emphasizing that its destabilizing pursuit of nuclear and ballistic missile programs poses a grave threat to regional security and global peace. The leaders called on DPRK to strictly abide by its international obligations and commitments. The leaders pledged to work together to counter the DPRK’s weapons of mass destruction programs, including by holding accountable all parties that support these programs.

The items listed above allude to China’s invasion and annexation of the South China Sea, which is a violation of international law, and calls for freedom of navigation throughout the region.

The third item in the list alludes to China’s “One Belt One Road” (OBOR) project. India has rejected the OBOR project, saying that the massive infrastructure projects violate India’s sovereignty in Kashmir. The appearance of this item in the joint statement indicates that the Trump administration agrees with India’s objections to the OBOR project.

Needless to say, these statements have infuriated China. According to China state media, if the US “cozies up” to India, it could lead to “catastrophic results,” which presumably means a war between India and China:

Washington and New Delhi share anxieties about China’s rise. In recent years, to ratchet up geopolitical pressure on China, the US has cozied up to India. But India is not a US ally like Japan or Australia. To assume a role as an outpost country in the US’ strategy to contain China is not in line with India’s interests. It could even lead to catastrophic results. If India regresses from its non-alignment stance and becomes a pawn for the US in countering China, it will be caught up in a strategic dilemma and new geopolitical frictions will be triggered in South Asia.

In an era when emerging countries have been playing an increasingly important role in global affairs, if India, an important participant in two non-Western organizations – the Shanghai Cooperation Organization and BRICS – can firmly stand together with China in striving for more discourse power, it will be helpful for New Delhi to realize its big power ambitions.

From the end of the 1950s to the beginning of the 1960s, both the Soviet Union and the US wanted to play the India card to check China. Then the Kennedy government supported India’s Forward Policy. But the result wasn’t what was expected. India isn’t able to balance China, which has been proved by history. New Delhi should avoid being roped into a geopolitical trap. Despite its anxieties over China’s rise, maintaining a stable relationship with China is of more importance to its security and development.

The sale of drones to India, and the apparent China “containment” policy of India and the US, are going on at the same time as a flare-up of border clashes in Sikkim. This is a good time to recall that there’s another border dispute that’s becoming critical: The increasing violence between separatist insurgents and Indian security forces in Kashmir. These are , are all signs of significantly worsening tensions between India and China. Defense News and Live Mint (India) and Sputnik News (Moscow) and Global Times (Beijing)