France struggles with hundreds of migrants returning to Calais campground 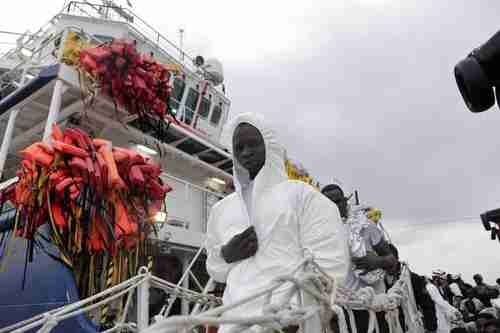 Migrants from Africa arrive in Italy on a rescue ship

In October of last year, France finally demolished the refugee camp known as “The Jungle.” It was populated by about 7,000 migrants who came there hoping to reach Britain, where they could apply for asylum. When the camp was demolished, they were given the choice of either being deported back to their home countries or of staying in some 300 temporary refugee centers across France, where they can apply for asylum.

However, many of them left Calais on their own, and went to the Grande-Synthe refugee camp in Dunkirk, which became known as “the New Jungle.” The camp had been built by Médecins Sans Frontières (Doctors Without Borders), and included hundreds of wooden huts. The camp opened in March 2016 as the first camp in France to meet international humanitarian standards, where migrant families could live in relatively dignified conditions in heated wooden cabins.

The Dunkirk camp had a capacity of 700 and was severely overcrowded, eventually housing 1,600. Furthermore, many of the new arrivals from The Jungle, who were mostly Afghans, did not get along with the original migrants, who were mostly Iraqi and Kurdish. There were multiple fights between groups of migrants of different nationalities, with some 600 migrants taking part in the fighting. In March of this year, the Grande-Synthe refugee camp, including all the wooden huts, burnt to the ground, leaving nothing but ashes. According to French officials, multiple fires must have been set on purpose.

So now, three months later, it is June, the weather is great, and hundreds of migrants are flooding back into Calais. Officials are refusing to build a proposed reception center for asylum-seekers to Calais, saying that it would only encourage more people to come.

According to France’s Interior Minister Gerard Collomb, part of the government of the new president Emmanuel Macron:

We’ve seen this before, it starts with a few hundred people and ends with several thousand people who we can’t manage. That’s why we don’t want a center here.

Humanitarian non-government organizations (NGOs) are trying to feed the 400-600 migrants currently “living rough” in Calais, but complain that they are being harassed by Calais police. So 11 NGOs sued the local authorities, saying that they have “prevented” the distribution of food to hundreds of migrants.

The court rejected the request to set up a new emergency center to shelter migrants in Calais but also ruled that the migrants should be allowed to receive humanitarian add. Furthermore, judges ordered officials, within 10 days, to establish several drinking fountains, toilets, and showers for migrants who are “exposed to inhuman and degrading conditions” in the area. The judge said, “It is not possible to leave these people, who are in a state of complete destitution without any aid.” AFP (23-June) and France 24 and The Local (France)

Italy begs for help after 12,000 migrants arrive in four days

Italy has threatened to close all of its ports to ships of foreign NGOs carrying migrants and refugees, after being overwhelmed by the arrival of 12,000 migrants in four days on 22 ships. The UN Migration Agency said 8,863 migrants were rescued trying to reach Italy from Libya, and the EU’s border agency Frontex said its boats had recovered an additional 2,700 people.

The ships cross the Mediterranean Sea from Libya and mostly contain African refugees. In one Italian port in Reggio Calabria alone, 1,066 people disembarked from the Save the Children rescue ship Vos Hestia on Thursday. Among them were 241 unaccompanied minors.

According to a European Council official:

In recent years people smugglers have launched massive numbers at the same time. But this year we are witnessing levels never registered before in such short periods of time.

Loss of life and continuing migratory flows of primarily economic migrants on the central Mediterranean route is a structural challenge and remains an issue of urgent and serious concern.

The EU and its member states must restore control to avoid a worsening humanitarian crisis.

Italy agrees that the EU must restore control. Italy says that it is unable to cope with this year’s expected flood of refugees, and is demanding help from the European Union, or else it will close all its ports to ships carrying migrants. Since the rescue operations do not take place in Italian waters, Italy is under no obligation under international law to take the refugees in, according to some experts. Analysts say that this would be a humanitarian catastrophe because the ships would have to be diverted to other countries, for which they have inadequate provisions.

One of the NGOs operating rescue boats said that it understood the pressure that Italy was under, but:

However, we also believe that closing the ports of safety to people seeking refuge from war, violence and poverty cannot be the solution. We would like to stress again that NGOs are not the cause, nor the solution to this humanitarian crisis. Without our presence at sea, even more people would die.

The kind of help that Italy would like is that refugees arriving in Italy should be distributed to other European countries, but there isn’t a snowflake’s chance in hell that will happen. In 2015, the EU agreed that 160,000 asylum seekers should be relocated from Greece and Italy to other member states, in the name of burden-sharing. To date, only about 22,500 of the 160,000 have actually been transferred. Several central and eastern European EU members – including large countries like Hungary and Poland – have absolutely refused to take in any asylum-seekers.

However, some EU officials are offering Italy financial aid.

Italy’s threat may be based in politics, in the wake of a Sunday local election rout for the ruling center-left Democratic Party, which several commentators blamed on public discontent with rising immigration and government proposals to grant citizenship to children of foreign residents. The opposition Forza Italia party of former premier Silvio Berlusconi – seen as one of the winners of the local elections – said the government had responded to its urgings for a tougher line on migration. Deutsche-Presse Agentur (dpa) and VOA and Guardian (London)