China establishes its first foreign military base, in Djibouti 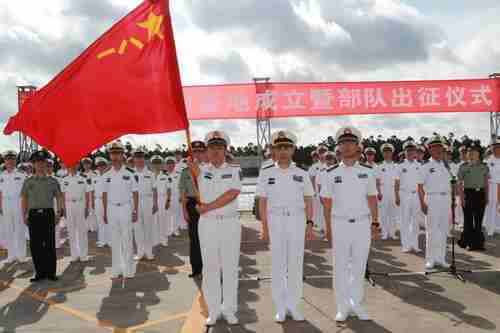 Chinese soldiers stand guard at a military port in Zhanjiang, Guangdong province, on Tuesday, as warships with soldiers depart for Djibouti (Reuters)

Ships carrying Chinese military personnel are being sent to Djibouti to set up a “logistics support base” to “ensure China’s performance of missions, such as escorting, peace-keeping and humanitarian aid in Africa and west Asia.” The base is clearly a military base, although Chinese media and officials are denying that. In fact, Western media are referring to it as China’s first military base outside of China.

On Wednesday, China’s Foreign Ministry spokesman Geng Shuang denied that there was any military expansion:

[The] establishment of this base is mainly aimed to enable China to better perform its escort missions in the Gulf of Aden and Somali waters as well as humanitarian relief and to make greater contributions to the peace and stability of Africa and beyond. In addition, I would like to reiterate that China stays committed to the path of peaceful development and follows a defensive national defense policy. This remains unchanged.

Apparently, Geng Shuang thinks that all of us in the West are so stupid that we do not remember that China told us exactly the same garbage about the South China Sea artificial islands. We were told that they were some sort of environmental project, with no military purpose whatsoever. Now those artificial islands are huge military bases bristling with missiles and aircraft, in clear violation of international law, as determined by a 2016 ruling by the United Nations Permanent Court of Arbitration (PCA) in the Hague, which declared China’s activities in the South China Sea to be illegal Today, it is clear that China is planning further criminal activity in the South China Sea, including launching military assaults to take full control of the entire South China Sea.

So now Geng Shuang thinks we are going to believe the same laughable nonsense about the Djibouti military base. Even more laughable is that Chinese media are weeping and whining, complaining about media bias. The Global Times says that “Many of the Western media has described China’s Djibouti facility as a military base and referred to the move as military expansionism,” and quotes Xu Guangyu, a military official as saying that Western media reports on the base show their prejudice:

China’s base in Djibouti has basic differences with military bases of other countries in scale, function and equipment. Compared with the specialized function of logistics support of the Chinese base, other military bases station more troops and fighters and conduct military training…

Whether a country needs to build an overseas base should come out of its own concerns and it merely involves bilateral talks with the other nation. Why do some Western countries make carping comments about China’s first overseas base, while they already have many?

Again, this is exactly the same kinds of things we heard from China when China was building illegal military bases in the South China Sea.

Ironically, what makes the above whining by Xu Guangyu even more laughable is that it’s contradicted by Chinese language editions of the Global Times:

We note that the base of the People’s Liberation Army in Djibouti was described as a “base of protection” and was not addressed as a “military base”. It is worth pondering.

First of all, it is indeed the People’s Liberation Army’s first overseas base, where China will garrison. It is not a commercial supply point. It is justified by foreign public opinion that the base can support the Chinese navy to go further and thus be significant.

The Djibouti naval military base is the perfect endpoint to China’s “string of pearls,” commercial deep-water ports in the Indian Ocean that China could use in time of wars. Many of these ports were built and often are operated by Chinese companies. These include deep-water ports in Sri Lanka, in Colombo and Hambantota; Pakistan, in Gwadar and Karachi; Myanmar, in Sittwe; and the Seychelles, in Port Victoria. The Gwadar port in Pakistan is expected to be upgraded to a full Chinese military base soon.

China’s base in Djibouti is at the southern entrance to the Red Sea on the route to the Suez Canal. Thus, in a time of war, China will be able to block traffic through the Suez Canal.

Each year since 1992, the United States and India have deployed warships, submarines, and aircraft as part of the joint Malabar exercises in the Bay of Bengal, adjacent to India and the Indian Ocean. Because of the increased military threat from China, the military exercises are the largest in 22 years and will include Japan for only the second time. The week-long series of war games will involve a total of 16 ships – including the nuclear-powered USS Nimitz, India’s INS Vikramanditya, a reconditioned Russian-built aircraft carrier, and Japan’s JS Izumo, a helicopter carrier with an emphasis on anti-submarine warfare – as well as two submarines and more than 95 aircraft.

However, the fact that Russia and China are supporting each other in criminal activities does not mean that they are going to be allies in any future war.

Russia and China have been historic enemies for centuries, at least since the Mongols conquered the Han Chinese in 1206, merged with them culturally, and then went on to brutally attack the Russians. Those wars are not forgotten today, and Russians and Chinese have deep hatreds for each other that will not be mitigated by a brief period of mutual support in the UN Security Council. In fact, China and Russia almost had a full-scale war with each other in the 1960s.

In early June 2017, Russian media reported that the powerful road-mobile 9K720 Iskander-M missile system was installed in Russia’s Eastern Military District. This joins three other major missile installations that took place in 2013, 2015 and 2016, respectively. These installations have very limited ability to strike American or Japanese targets. Their only logical purpose is to strike China. Indeed, the system’s ability to deliver a wide range of cluster munitions makes it particularly suitable for use against People’s Liberation Army (PLA) armor and infantry in the event of an armed confrontation.

In 2014, Russia held the massive Vostok military exercises in the Far East, explaining that the military drills were necessary to prepare for war with the United States. And yet, the assets deployed during this exercise were more consistent with preparing for a defense of the Far East, a region that America would be unlikely to invade if it wanted to invade Russia at all. The only state actor that against which such a defense is needed is China. And so it appears that Russia and China claim that they’re each preparing for war with the United States, but they’re also preparing for war with each other. CNN and The Diplomat and Lowy Institute (Australia)