A Turkish nightclub has canceled an event marketed as a celebration of the failed 2016 coup against President Recep Tayyip Erdogan, billed as a “Democracy Party” and encouraging patrons to wear red and white, the colors of the Turkish flag.

The Inferno nightclub, which boasts locations in Antalya and Konya, had advertised a “July 15 Democracy Party” and promised not to collect cover charges from clubgoers wearing red and white or anyone carrying a Turkish flag. 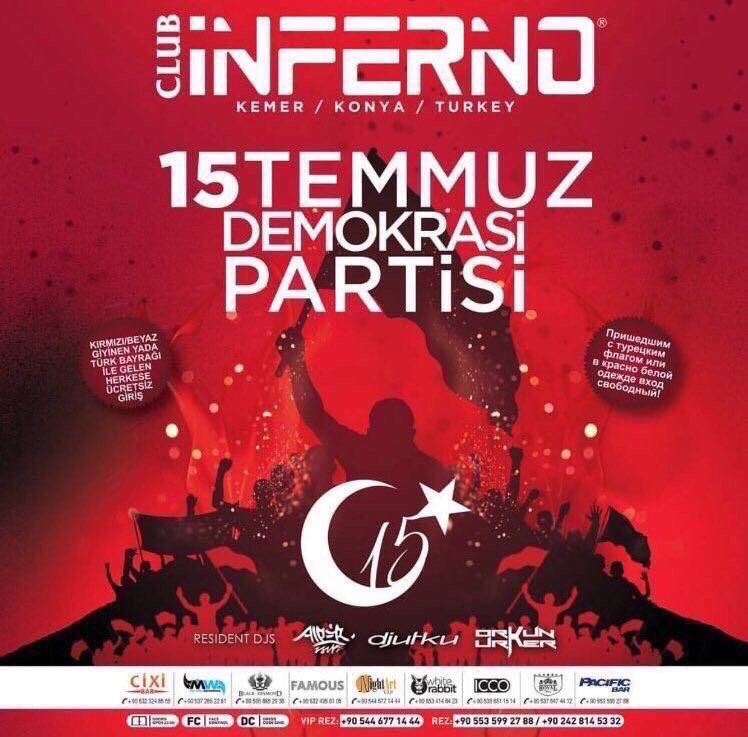 The Turkish newspaper Cumhuriyet reports that the advertisement resulted in a “massive” backlash against the club from Turks who found the event insensitive to those who died on July 15, 2016, when a faction of the military revolted against Erdogan and announced that it had established itself as the rulers of the nation. Erdogan and his Islamist loyalists ultimately subdued the rebels and successfully ended the coup attempt.

Inferno—which Turkish newspapers did not name—ultimately canceled the event and posted an apology on both Facebook and Instagram:

According to Turkish newspaper Hurriyet, the apology reads in part:

The events organized to mark the July 15 Democracy and Freedoms Day were distorted on social media. Our business sees the day as an independence day when our people won a glorious victory. The team that organizes our club’s events planned this party with completely pure and patriotic emotions. … We apologize to the martyrs’ relatives and our sacred nation because of the advertisement published on our social media account, even though it remained there for a short period of time.

The apology went on to “ask Allah’s mercy for the souls of all our martyrs” and in part defend the idea as akin to similar club celebrations on Turkish patriotic days like “Atatürk, Youth and Sports Day” (May 19) and “Victory Day” (August 30).

The Turkish government counted 265 deaths the night of July 15 and has hosted events all week to commemorate the victims and celebrate the failure of the attempt. The Turkish state-run Anadolu news agency listed among the events scheduled for Saturday a series of nationwide Quranic prayers, multiple public “Democracy Watch” marches around the country beginning at midnight, and the debut of a state-sponsored documentary screening on the event.

On Thursday, Erdogan delivered an address commemorating the failed coup. “There are important turning points in the histories of nations and states, which direct their future. July 15 is such a date for the Turkish nation and the Turkish Republic. From now on, nothing will be the same as it was before July 15,” he told the audience. “After the attacks of terrorist organizations following July 15, we have seen that we will either die or exist.”

Erdogan also used the occasion to attack the United States and Europe, claiming that Turkey has a greater respect for human rights and universal freedoms than the West, despite what have become routine Erdogan-era crackdowns on newspapers, broadcasters, and individuals on social media who dare criticize the government.

We see the U.S. does not allow July 15 posters displayed on subways. We see similar things in Europe. We went to the G20 summit and wanted to meet our citizens in hall meetings. The applications were submitted, however, they did not allow the president of Turkey, they did not allow the ministers. When it comes to it, they talk about freedoms. What kind of freedom is this?

Some Western nations have turned down Turkish government attempts to organize coup anniversary events and pay for advertising in their countries.