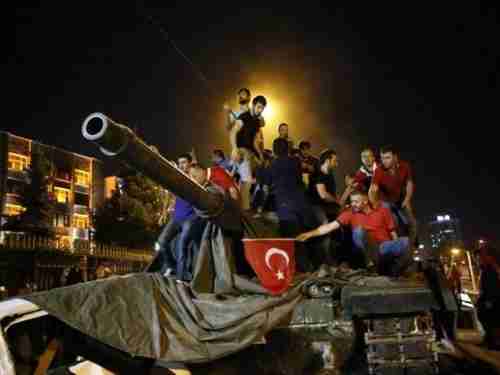 Young men stand on a Turkish army tank in Ankara on July 16, 2016, the day after the attempted coup. (Reuters)

Heads rolled at the top of Turkey’s military last week, as the army, air force and navy commanders were all replaced.

The replacements came a year after the aborted military coup of July 15 of last year. Since the coup, over 100,000 people have been fired or jailed, in a variety of professions, often with no evidence.

The military came under special scrutiny since renegade military officers led the aborted coup. Immediately after the coup attempt, the government ordered the firing of 149 generals – nearly half of the armed forces’ entire contingent of 358 – for alleged complicity in the coup attempt.

This hollowing of Turkey’s armed force is blamed for Turkey’s poor performance in Operation Euphrates Shield last year. That operation used Syrian rebel militias supported by Turkey’s army and air force with the objective of defeating the so-called Islamic State (IS or ISIS or ISIL or Daesh) and also of pushing the Kurds back east of the Euphrates River. Turkey was only minimally successful with both objectives.

Turkey is committed to preventing the Kurds from gaining a foothold in northern Syria, and in particular to preventing the creation of an independent Kurdish state called Rojava. The Kurdish terrorist group Kurdistan Workers’ Party (PKK) has been conducting an insurgency in Turkey since the 1980s, and has perpetrated large terrorist attacks in Turkish cities during the last three years.

Ongoing instability along the countries on our southern border, as well as the lack of proper governance and civil war pose the biggest threat to our fight against terrorism.

In a speech on Saturday, Erdogan said:

We will not leave the separatist organization in peace in both Iraq and Syria. We know that if we do not drain the swamp, we cannot get rid of flies.

The fight to expel ISIS from Raqqa, its Syrian stronghold, has been led by the People’s Protection Units (YPG), consisting mostly of Kurdish fighters, backed by the United States. The US has been working with the YPG because the Kurds have proven themselves to be the most effective fighters in Syria against ISIS.

Turkey is infuriated by this choice because they consider all Kurds in Syria to be linked to the PKK. Turkey had offered its own fighters to expel ISIS from Raqqa, but after Turkey’s poor performance last year, the YPG was the obvious choice.

Turkey has been particularly infuriated because the US is supplying weapons to the YPG, and Turkey fears that these weapons will be used against Turkey once the Raqqa operation is completed.

These concerns became acute since YPG forces on Saturday destroyed a tank “belonging to terrorist groups under the Turkish army’s command,” referring to the rebel forces that Turkey used to fight Operation Euphrates Shield. This event occurred in Afrin, a city outside of Raqqa. The YPG used an anti-tank guided missile system (ATGM) to destroy the tank. The ATGM may have been supplied by the US, but the YPG could have obtained the ATGM system from other sources as well.

Turkey is also concerned about the presence of al-Qaeda linked forces in Idlib, near Turkey’s border. These forces are the Hayat Tahrir al-Sham, formerly known as the al-Nusra Front. Turkey is concerned about an imminent threat that can be posed by al-Nusra elements against Turkey and of a possible influx of refugees into Turkey because of attacks by the al-Nusra militias. Hurriyet (Ankara) and Navy Times and Reuters