A bizarre report on dictator Nicolás Maduro’s public appearances on Venezuela’s state-run media outlet Tuesday appeared to refer to violent rallies in Charlottesville, Virginia, this weekend as being located in “Chicago” and quotes Maduro claiming that Venezuelan opposition groups have used the same insignia as the Ku Klux Klan (KKK) at anti-socialist protests.

VTV reported in a story headlining its website Tuesday that Maduro “emphasized that terrorist actions generated by the far right of the country [Venezuela], are similar to the assemblies of the KKK movement, referring to rallies by followers of this group this past Saturday in Jackson Park, located in Chicago (United States).”

While there is a Jackson Park in Chicago—soon to be home to the Obama Presidential Center—there are no known reports of a KKK presence there this weekend, or any other weekend. Charlottesville, which did host a white nationalist rally this weekend, boasts a Jackson Park, recently renamed “Justice Park.”

At press time, the reference to Chicago remains in the article’s text, alongside a photo of KKK members: 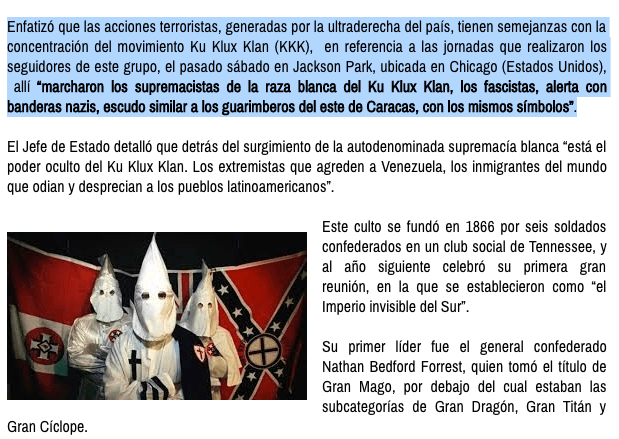 The geographical error on the site is particularly embarrassing for the Venezuelan government given remarks by Nicolás Maduro, Jr., a 27-year-old appointed to the fraudulent alternative legislature his father created to drown out the voice of the opposition, threatening an invasion of the White House. “If the United States wants to stain our fatherland soil, the firearms will reach New York and we will take the White House,” the younger Maduro stated, leaving many questioning whether he was aware that he would not find the White House in New York.

The VTV story in question refers to what has become a daily tirade against the United States from Maduro, this time on Monday when he condemned the KKK and claimed they had some association with anti-socialist peaceful protesters in Venezuela.

Speaking at a podium decorated with late dictator Hugo Chávez’s face and the Twitter hashtag “#TrumpOutofLatinAmerica,” Maduro claimed that those marching in Charlottesville “use similar shields” as Venezuelan opposition protesters.

The pervasive use of state violence against protesters—largely the use of tear gas, rubber bullets, and armed vehicles—have led Venezuelan protesters to protect themselves with shields made of cardboard or what appear to be scraps from trash cans. The protesters have decorated many of these shields with the Venezuelan flag, quotes by founding father Simón Bolívar, and the names of the over 100 killed by state violence since March. 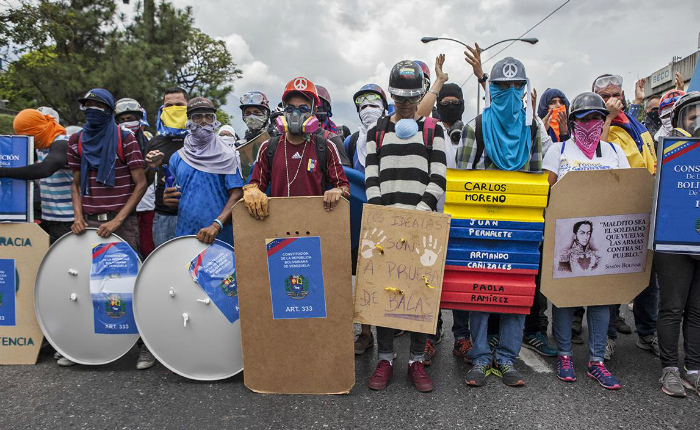 Maduro did not explain the correlation between the KKK and the protesters’ shields.

“Last Saturday, they marched in the important American city Charlottesville. The white supremacists of the Ku Klux Klan marched with Nazi flags—alert!” Maduro said. “[They carried] shields similar to the ones used by the protesters in east Caracas, with the same symbols.”

Maduro continued to claim that “behind the white supremacists is the power controlling the White House and all walks of power in the American empire. That is the truth.”

This is not the first time that Maduro has invoked the KKK to attack President Donald Trump and the United States in general. “I am against the Ku Klux Klan that governs the White House and I am proud of being this way,” Maduro said on television last week, following yet another round of sanctions against his drug- and terrorism-affiliated regime. “Sanction us however you want, but the Venezuelan people have decided to be free, and I will be the president of a free people.”

Given both the violence against peaceful protesters from the military and Maduro-approved chavista gangs known as colectivos, the American embassy in Caracas has warned Americans in the country that they may be the target of hate violence. “We call on American citizens to avoid transiting through protests; even those that have appeared peaceful can generate confrontations and escalate into violence,” a statement from the embassy this week read.