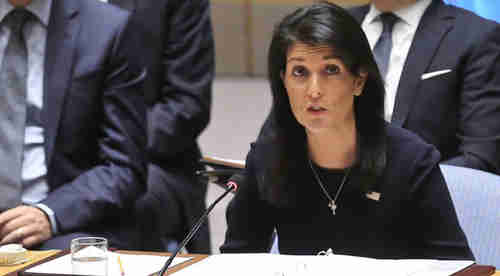 During an emergency session of the UN Security Council on Monday, called as a response to North Korea’s weekend hydrogen bomb test, US ambassador Nikki Haley said that North Korea is “begging for war” and that the US does not have unlimited patience.

Here are some excerpts from her statement (my transcription):

To the members of the Security Council, I must say enough is enough. We have taken an incremental approach, and despite the best of intentions, it has not worked. Members of this council will no doubt urge negotiations, and a return to talks.

But as I’ve just outlined, we have participated in numerous direct and multilateral talks with the North Korean regime, and time after time they have not worked. The time for half measures in the Security Council is over. The time has come to exhaust all of our diplomatic means, before it’s too late. We must now adopt the strongest possible measures. Kim Jong-un’s actions cannot be seen as defensive. He wants to be acknowledged as a nuclear power. But being a nuclear is not about using those terrible weapons to threaten others. Nuclear powers understand their responsibility. Kim Jong-un shows no such understanding.

His abusive use of missiles and his nuclear threats show that he is begging for war. War is never something the United States wants; we don’t want it now, but our country’s patience is not unlimited; we will defend our allies and our territory.

The time has come to exhaust all diplomatic means, to end this crisis. And that means quickly, enacting the strongest possible measures here in the UN Security Council.

Only the strong sanctions will enable us to resolve this problem thru diplomacy. We’ve kicked the can down the road long enough. There is no more road left.

This crisis goes well beyond the UN. The United States will look at every country that does business with North Korea as a country that is giving aid to the reckless and dangerous nuclear intentions.

And what we do on North Korea will have a real impact on what other outlaw nations who seek nuclear weapons choose to conduct themselves in the future.

The stakes could not be higher. The urgency is now. 24 years of half-measures and failed talks is enough.

Haley is proposing a maximal round of extremely harsh economic sanctions on North Korea, as a last-ditch attempt to stop North Korea by diplomatic means.

From the point of view of Generational Dynamics, the phrase “begging for war” is an interesting one, because it describes a widespread attitude that can prevail during a generational Crisis era, but not elsewhere on the generational timeline.

For America and other countries during the 1960s-90s (generational Awakening and Unraveling eras), for most people war was to be avoided. That is because the survivors of World War II were still in power, and they recall the horrors, the atrocities, the rapes, the famines, the genocides, and so forth, and they will do anything to keep it from happening again.

Today, those WWII survivors are gone, and people in most countries are increasingly nationalistic and xenophobic. They think that they can easily win any war – that is certainly the attitude of people in the U.S., China, and North Korea.

So leaders in the 1990s did anything to avoid war, because they have personal memories of the horrors of WWII; leaders today have never experienced any such horrors and, with their nationalism and xenophobia, they consider war acceptable or even desirable. North Korean leaders have been taking this one step further, seeming trying to actually provoke war. Hence, “begging for war.”

It is well to remember that North Korea has been “begging for war” for years. In 2010, the North conducted two acts of war targeting South Korea: in May, North Korea torpedoed and sank the warship Cheonan, killing dozens of South Korean crew members and, in November, North Korea killed South Korean civilians by shelling Yeonpyeong Island. In both cases, the South Koreans chose not to respond, but it is pretty clear that they might have.

The concept of “begging for war” can take other forms as well. My father, who was a Greek immigrant, told me when I was a kid that in the 1930s the violence by labor unions and communist groups was so great that he thought that America might not survive. I wish I had asked him for more details but, unfortunately, I didn’t. But we can see the same thing today in America, with the 2006 movie Death of a President inciting the assassination of George Bush, labor union boss James Hoffa during the Obama administration repeatedly inciting violence against the Tea Party and other Obama opponents, organizations like Black Lives Matter inciting violence against policemen, and organizations like Antifa violently beating and assaulting anyone they disagree with – all with the encouragement of Democratic party leaders who have no memory of WWII and its horrors. These kinds of things occur during generational Crisis eras and are a form of the “begging for war” concept.

The phrase “begging for war” is extremely startling when coming from a diplomat, because it is a concept that can be understood only through generational theory. For that reason, I’m tempted to think that it had its roots in the days when Steve Bannon was in the White House, as Bannon is an expert on both world/military history and Generational Dynamics. VOA

Haley’s call for a maximal round of extremely harsh economic sanctions on North Korea would fall most heavily on China, as 90 percent of North Korea’s trade is with China. China is scrambling in every way possible to shift all the responsibility back to the United States.

A couple of days ago, the BBC interviewed a Moscow analyst in Russia’s government. He said that really Russia and China do not care if North Korea builds a nuclear ballistic missile since it will be aimed at the U.S. rather than at either of them. Good to know.

So China’s UN ambassador Liu Jieyi followed Haley at the UN Security Council and responded to Haley’s calls for harsh economic sanctions. His statement was almost meaningless babble, but it did put all the responsibility on the United States:

The proposal by China and Russia of a two-track approach, which promotes the denuclearization of the peninsula, and the establishment of a peace mechanism in parallel the suspension initiative which calls for the DPRK to suspend its nuclear missile activities and for the United States and the Republic of Korea to suspend their large scale military exercises and the step by step conception from Russia are the basis on which both countries currently propose a roadmap to resolve the peninsula issue.

This meaningless babble did contain the “freeze for freeze” proposal that Russia and China are advocating. Under this proposal, the United States and South Korea would end their annual joint military exercises. The whole idea is a big joke since North Korea would simply continue nuclear weapon and missile development in underground bunkers, and then as soon as Donald Trump said something they did not like, they would say that they have to resume testing again.

Nikki Haley did respond to Liu’s statement by calling it “insulting”:

The idea that some have suggested the so-called “freeze for freeze” is insulting. When a rogue regime has a nuclear weapon, and an ICBM is pointed at you, you do not take steps to lower your guard. no one would do that, and we certainly won’t.

It is very hard to see where all this is going to go, except to war.

North Korea is not going to stop developing nuclear weapons and ballistic missiles under any circumstances, despite sanctions or proposals for negotiations. It’s a done deal.

China is playing the extremely dangerous game “Let’s You and Him Fight.” It is quite possible that Chinese leaders believe that if there is a new Korean war, then China will be the victor. That is typical of the stupid fantasies that people believe during a generational Crisis era.

The Trump administration, as far as I can tell, has clearly committed itself to stopping North Korea from developing a nuclear ICBM, using military means to do so, even if it results in a war that will involve South Korea. This was already clear from yesterday’s article, and it was reinforced very forcefully on Monday by Nikki Haley. Eric Berne – Let’s You and Him Fight

Not surprisingly, North Korea’s weapons tests are provoking Japan and South Korea to consider developing their own nuclear weapons, as defensive measures.

South Korea’s new president Moon Jae-in suspended deployment of the American-supplied Terminal High Altitude Area Defense (THAAD) systems when he took office several months ago because he did not want to anger China. China is alarmed by the THAAD installation, but not because of the missiles, which are purely defensive, but rather because the THAAD systems have very powerful radar capabilities that can peer deep into China.

US president Donald Trump also took steps on Monday to help South Korea strengthen its military. Trump agreed to remove decades-old restrictions on the maximum payload of South Korea’s missiles, as an effective counter-measure to the North’s hydrogen bomb test. Trump also said he would approve arms sales worth “many billions of dollars” to South Korea.

South Korea hosts 28,500 US troops to defend it, and it is banned from building its own nuclear weapons under a 1974 atomic energy deal it signed with Washington, which instead offers a “nuclear umbrella” against potential attacks. Stars and Stripes and AFP