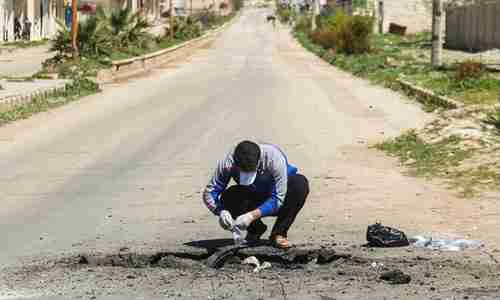 A Syrian man collects samples from the site of the Sarin gas attack in Khan Sheikhoun in April. (AFP)

A UN report confirms Syria’s air force conducted a massive Sarin gas attack on the town of Khan Sheikoun in Hama province on April 4, killing at least 83 civilians. The report, by the Independent International Commission of Inquiry on the Syrian Arab Republic, says that the regime of Syria’s president Bashar al-Assad conducted over 20 chemical weapons attack in the past four years.

Readers may recall that on April 6 of this year, American ships in the eastern Mediterranean Sea launched dozens of cruise missile attacks at the Shayrat Airbase in Syria. This airbase was chosen because it was the airbase from which the April 4 Sarin gas attack on Khan Sheikhoun took place. The Syrian regime claimed at the time that the Sarin gas attack never took place, but the new UN report now confirms that it did and that the Syrian regime was responsible:

The commission finds that there are reasonable grounds to believe that Syrian forces attacked Khan Sheikhoun with a sarin bomb at approximately 6.45 a.m. on 4 April, constituting the war crimes of using chemical weapons and indiscriminate attacks in a civilian inhabited area.

The Syrian regime is still claiming that the attack never took place, despite the 83 civilian deaths. According to pro-regime political commentator Marwa Osman, an MIT professor looked at photos and said that “the attack could not have happened”:

I think this is just the last case, or the last scenario in the hands of the West, especially the US-UK and its EU friends who were against the Syrian government, the Syrian army from the beginning of the crisis. But if you want to talk about the report, the actual information that was given by the report. If you go back to April 2017, just after Khan Sheikhoun, we had a professor, an actual expert on chemical attacks, an MIT [Massachusetts Institute of Technology] professor called Theodore Postol, who actually managed to look at the video and photos that were sent. And just by looking at those photos he literally said this attack could not have happened. And he presented evidence, given the fact that the people were not dressed well for any sarin poisoning, especially after the attack. He presented evidence concerning the people who were there without any gloves, without even any shoes on their feet.

Osman says that the only reason for the UN report was to undermine the regime’s military successes in Deir az-Zour.

The UN report also documents chemical weapons attacks by the al-Qaeda linked al-Nusra front, as well as other militant groups. The report documents 25 incidents of chemical weapons use in Syria between March 2013 and March 2017, of which 20 were perpetrated by Syrian regime forces and used primarily against civilians. United Nations and Canadian TV and Russia Today

The Syrian regime says that Israeli warplanes fired rockets from Lebanon’s airspace and hit a military facility, the Al-Tala’i Scientific Studies and Research Center, near Masyaf in Hama province.

Amos Yadlin, a former head of Israeli military intelligence, said that the strike was “not routine,” and that:

[The target was a] Syrian military-scientific center for the development and manufacture of, among other things, precision missiles.

The factory that was targeted in Masyaf produces the chemical weapons and barrel bombs that have killed thousands of Syrian civilians.

Syria’s army said that the Israeli rockets targeted “military positions” and killed two army personnel, causing “material damage” to the site. The army statement said that the attack was in support of the so-called Islamic State (IS or ISIS or ISIL or Daesh):

“This aggression comes in a desperate attempt to raise the collapsed morale of the ISIS terrorists after the sweeping victories achieved by the Syrian Arab Army against terrorism on several fronts, and it affirms the direct support provided by the Israeli entity to the ISIS and other terrorist organizations,” the Army Command said in a statement.

The Command warned against the dangerous repercussions of such hostile acts on the security and stability of the region, reiterating determination to eliminate terrorism and uproot it from all the Syrian territories whatever the type of support provided to these terrorist groups is.

Israel is becoming increasingly concerned that Iran’s puppet Hezbollah militia, based in Lebanon, is planning a new attack on Israel after being freed from the heavy commitment to fight side-by-side with the al-Assad regime in Syria. According to Israeli sources, it was believed that Hezbollah had planned to take control of the targeted facility, with the manufactured weapons, including chemical weapons, to be used against Israel.

Israel has been particularly concerned that weapons from Syria, including chemical weapons, could be transferred to Hezbollah in Lebanon for use against Israel. Former Israel Air Force chief Amir Eshel recently said that Israel carried out at least 100 strikes over the past five years against the transfer of advanced arms, including chemical weapons, from the al-Assad regime to Hezbollah. SANA (Damascus) and BBC and Jerusalem Post and Long War Journal