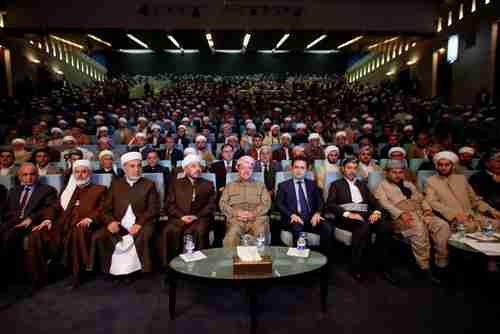 Thousands of ethnic Kurds in Erbil, the capital city of the Kurdistan Region in Iraq, were dancing in the streets and setting off fireworks on Tuesday, celebrating what is apparently an overwhelming YES vote on the non-binding referendum for Kurdistan independence.

Voters were asked to answer either YES or NO on the ballot asking them just one question in Kurdish, Turkish, Arabic and Assyrian: “Do you want the Kurdistan Region and Kurdistani areas outside the (Kurdistan) Region to become an independent country?”

An estimated 78 percent of the more than five million eligible voters cast a ballot. The ballots are still being counted, though some reports indicate a YES vote around 90 percent.

The reasons that they were celebrating is that they were hoping, probably delusionally, that the successful referendum may be the first step in the creation of an independent nation of Kurdistan, something that has been a frustrated hope for at least a century.

Although the referendum took place in Iraq, there are large populations of Kurds in several countries in the Mideast and the South Caucasus. There are 20 million Kurds living Turkey, Syria, Iraq, Iran, Armenia, and other countries, making it an anomaly that they are one of the largest ethnic groups that did not get their own state after two world wars in the last century.

The reason that this particular time was chosen for the referendum is because the Kurds believe that they have leverage for their role in fighting the so-called Islamic State (IS or ISIS or ISIL or Daesh), which began occupying Iraq with the the catastrophic fall of Mosul to ISIS in June 2014.

Since then it has been the Kurds that have been the main fighting force against ISIS. The Kurds protected Iraqi refugees, including Yazidi refugees, from ISIS, and played an important part in expelling ISIS from Mosul earlier this year. The Iraqi Kurdish leader, Massoud Barzani, was emboldened by the Kurds’ success in fighting ISIS and felt that it was necessary to move quickly before the international goodwill dissipated. Reuters and AP and Atlantic (24-Sep)

Israel may be the only country recognizing the Iraq Kurdistan referendum

Iraqi leader Massoud Barzani may have been hoping for some gratitude from the international community, especially the United States, for the Kurds doing such a great job fighting ISIS in Iraq, and even for the great job that the Kurds are doing fighting ISIS in Raqqa in Syria. Unfortunately, those hopes are not being fulfilled.

Secretary-General António Guterres voiced concern over the referendum in a statement:

The Secretary-General respects the sovereignty, territorial integrity and unity of Iraq and considers that all outstanding issues between the federal Government and the Kurdistan Regional Government should be resolved through structured dialogue and constructive compromise.

The Secretary-General expects that United Nations-mandated activities across Iraq, including in the Kurdistan region, will be allowed to continue unhindered.

There are many countries in the world today with ethnic sub-populations that would like to form an independent region. Many people in Scotland would like to leave the United Kingdom. The Catalonia region of Spain would like independence. China has multiple separatist problems, in Hong Kong, Xinjiang, Tibet and Taiwan.

So none of these countries is going to support an independence referendum in Iraq, since doing so would energize the separatist forces in their own countries.

Iraq’s prime minister Haider al-Abadi will not even negotiate with the Kurds:

We are not ready to discuss or have a dialogue about the results of the referendum because it is unconstitutional.

Most of the problems of the [Kurdish] region are internal ones, not with Baghdad, and will be increased with the calls for separation. The economic and financial problems the region is suffering from are the result of corruption and mis-administration.

The United States, the European Union, Turkey, and Iran all fear that the referendum could destabilize the region. Turkey, Iraq, and Iran are all sending troops for exercises near the Kurdistan border. Iraq is threatening to cut off air travel. Turkey is threatening to close the pipeline that goes through Turkey, and which the Kurds use to sell oil to international markets. Closing the pipeline would cut Kurdistan’s major source of revenue. In fact, Turkey’s president Recep Tayyip Erdogan accused Barzani of “treachery,” while Iranian officials have called the referendum “evil.”

So with almost universal rejection of the referendum results, it may be considered surprising the Israel supports the independent state of Kurdistan. Several times in the last few years, Israel’s prime minister Benjamin Netanyahu has supported independence, saying that the Kurds are a “brave, pro-Western people who share our values.” Many Israelis feel that they have a lot in common with the Kurds, in that Jews also had to fight to create the state of Israel.

This has led Iran’s Supreme Leader Ayatollah Seyed Ali Khamenei to issue a statement calling the independence referendum a “Zionist plot” meant to fuel violence in the Mideast.