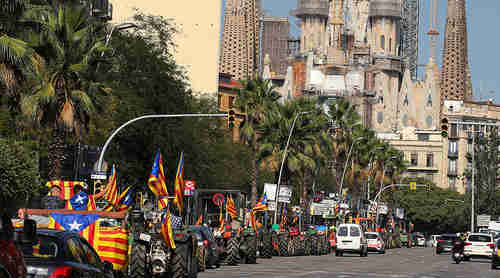 On Friday, hundreds of farmers drove tractors into Barcelona to support the referendum and to protect polling places (Reuters)

Spain’s government in Madrid is going to extraordinary measures – some would say heroic measures, others would say abusive, paranoiac measures, depending on point of view – to prevent Catalonia’s independence referendum from taking place on Sunday.

Madrid has sent tens of thousands of national police into Catalonia. The police have gone from house to house confiscating vote record forms, ballot boxes, and almost ten million ballot papers, as well as and campaign leaflets. They have demanded that Google make the Catalonia voting app unavailable, and Google has complied, although many are now turning to encrypted communications with WhatsApp. The police stored Catalonia’s parliament and government building and arrested high-level Catalonian politicians for the crime of preparing for the referendum.

All of these measures have infuriated the Catalans, and the anger is so intense that even if the referendum is stopped, Madrid may lose control of Catalonia’s political situation, and the government of Mariano Rajoy, who is already weak, may collapse.

If the referendum wins, then there are widespread fears that it will destabilize Spain and cause chaos in the rest of the European Union trying to deal with the backlash. A YES vote would probably mean that Catalonian leaders would declare independence, even if they currently claim that they won’t. Catalan leaders would take steps to enforce the claim, like not forwarding taxes to Madrid, or not honoring Spanish courts, or dissolving the local parliament and calling for new elections. Madrid would be forced into military action. Violence is a distinct possibility, since Catalonia itself is sharply split, as many Catalans oppose independence. Ironically, the Catalans who oppose independence have said that they will boycott the referendum, making a YES vote all the more likely.

In Madrid on Saturday, thousands of people rallied in a central plaza to protest the independence referendum, shouting “Long live Spain!” and “Puigdemont to jail!”, referring to Catalan regional President Carles Puigdemont.

A lot of this has to do with money. Catalonia contributes more in taxes to Madrid than it takes out in benefits, so of course Madrid does not want to permit independence. If Catalonia were getting more in benefits than it pays in taxes, then they wouldn’t want independence, and Madrid would be happy to be rid of them. As an aside, money is also the issue in the Kurds’ separatist referendum in Iraq, since the Kurds pay more to Baghdad than they receive. In the end, all the supposedly high-minded rhetoric is only about money. That is the way the world works.

The usual gang of international thieves is promoting independence, not because they care at all whether the Catalan people are alive or dead, but because they want to create chaos in the European Union. These include alleged rapist Julian Assange, hiding out in London’s Ecuador embassy to avoid facing his rape victim accusers, and Edward Snowden, the American criminal traitor currently hiding out in Russia under the protection of the Kremlin. The Kremlin is the third member of the gang, meddling in the referendum election with trolls and massive amounts of with fake news to discredit Spain’s government.

Even if the referendum fails, there may be chaos anyway. On Tuesday, the radical left separatist party CUP will be joined by some of the trade unions in a general strike, to protest against the state’s repression and for civil liberties. Euro News and Business Insider and Atlantic and VOA and La Vanguardia (Barcelona) (Trans)

There are 5.5 million Catalans eligible to vote in Sunday’s referendum. When an independence vote was held in 2014, only 40 percent of the eligible voters bothered to vote, effectively making the referendum irrelevant. This time, Madrid’s harsh police tactics, particularly arresting Catalan politicians, have so energized Catalan voters, that many more may be inclined to vote. If over 50 percent voted and the referendum passed, the separatists would declare a victory.

The Madrid government is aware of this as well, which is why they have been confiscating ballot papers, shutting down Google apps, and arresting Catalan leaders.

There is one final battleground before the referendum: Catalonia’s school buildings.

There are 2,315 polling places in Catalonia where people can go to vote, and most of them are school buildings. Madrid police are sealing these buildings off, with the objective of keeping people from voting at all.

Catalan families, including parents and children, have responded by holding parties in the schools all day Saturday, playing football, yoga sessions, picnics, board games, and ping pong in schools, to prevent the police from closing the schools. The partying will continue through the night, with the intention of continuing until the polls open at 9 am on Sunday.

The charade is supposed to end at 6 am Sunday morning. Police have delivered an ultimatum to families occupying the schools to leave by that time. Police have been told to use “minimum force” when evicting families from the schools. Washington Post and AFP and AP