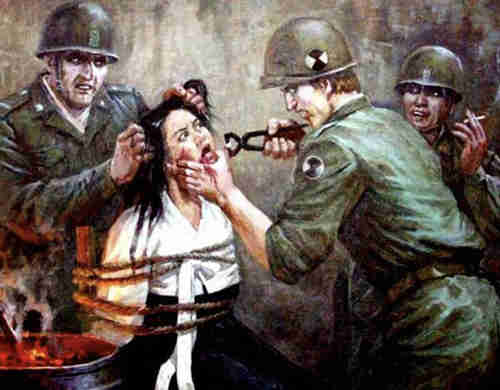 On Sunday, Secretary of State Rex Tillerson said that “diplomatic efforts will continue until the first bomb drops.” When I first heard that, I immediately thought that he was being intentionally ambiguous because he could easily have made it clearer whether he meant the first North Korean bomb or the first American bomb.

Tillerson was responding to a question about whether President Trump’s tweets undermine him:

Well, I think what the President is doing is he is trying to motivate action on a number of people’s part in particular the regime in North Korea. I think he does want to be clear with Kim Jong-un and that regime in North Korea that he has military preparations ready to go and has those military options on the table and we have spent substantial time actually perfecting those. But be clear, the President has also made clear to me that he wants this solved diplomatically. He is not seeking to go to war.

[Question: So he does think it is a waste of time?]

When we try to interpret what Tillerson and Trump mean by this we have to understand that the United States has run out of time. As Nikki Haley said last month, “We have kicked the can down the road long enough. There is no more road left.” This means that one US administration after another have allowed North Korea to carry out their threats to develop a ballistic missile with a nuclear warhead.

Most analysts believe that North Korea will “soon” have the ability to target the United States mainland with a nuclear weapon equipped ballistic missile, where “soon” could mean several weeks to several months. Indeed, North Korean officials have repeatedly said that they are working non-stop to develop this nuclear missile capability and neither diplomacy nor sanction nor anything else will stop them. At that point, the North Koreans are expected to do something spectacular, like launch a nuclear missile to land in the Pacific Ocean halfway to the US mainland.

This will be a clear tipping point in the North Korean crisis. The North Koreans believe, possibly correctly, that once this point is reached, then they will be able to use nuclear threats to make demands of the US, South Korea, and Japan, such as demanding that all US troops be withdrawn. The North Koreans would then continue development, and would soon have an arsenal of ballistic missiles with nuclear missiles targeting the US mainland. This will also presumably make the Russians and the Chinese very happy as well.

Would the North Koreans actually carry out their nuclear threats? I keep going back to 2010, when the North conducted two acts of war targeting South Korea: in May, North Korea torpedoed and sank the warship Cheonan, killing dozens of South Korean crew members, and in November, North Korea killed South Korean civilians bby shelling Yeonpyeong Island. In both cases, the South Koreans chose not to respond, but it is pretty clear that they might have.

The North Koreans carried out those two acts of war because they correctly concluded that the South Koreans would not retaliate. Since the beginning of his term, President Trump has repeatedly made clear, through tweets and statements, that unlike the South Koreans in 2010, we actually would retaliate, and forcefully. But after three decades of empty threats by American administrations, the North Koreans may quite reasonably conclude that Trump’s tweets are simply another empty threat.

And so we return to Tillerson’s remark, and to the question: Why was it so carefully and meticulously ambiguous as to whether “the first bomb” would be dropped by the US or North Korea?

Will Trump and Tillerson permit North Korea get to the point where they have an arsenal of nuclear-tipped ballistic missiles pointed at the United States? These are two older men, Boomers, decisive, sharp businessmen who now have to make the most important and critical decisions of their lives. I certainly can’t read their minds, but I find it hard to believe that they would just sit back and let North Korea develop a nuclear arsenal with impunity, and then have to lead a humiliated United States a year from now. CNN and AFP and Sputnik News (Moscow) and KCNA Watch (North Korea)

As tensions over the North Korea crisis rise almost on a daily basis, the above is the kind of question that a lot East Asians are asking themselves. Will the United States allow North Korea to develop a nuclear ballistic missile arsenal that would put Los Angeles at risk? Or will the US strike North Korea’s nuclear capabilities and save Los Angeles, but risk a retaliatory North Korean attack on Seoul – or Tokyo?

After World War II, the United States took on the role of Policeman of the World, and in doing so, signed some sort of mutual defense treaty with many countries: Japan, South Korea, Israel, Taiwan, the Philippines, the Marshall Islands, the ANZUS agreement with Australia and New Zealand, a special treaty with Iceland, and the NATO agreement with all of Europe. The purpose was to discourage attacks on any of these allies that would otherwise have the risk of spiraling into World War III.

What we’re seeing now is a kind of fatal flaw in the strategy behind these mutual defense treaties. The idea was that the United States would protect these countries, but today the United States is more concerned about protecting itself.

And because of the mutual defense treaties, neither South Korea nor Japan has a nuclear capability or nuclear deterrent, even though both countries are threatened with nuclear attack from North Korea (not to mention China), and even though they now feel unsure that they can depend on the United States to protect them.

Development of a nuclear capability in Japan is deeply unpopular because of their experience in World War II. But according to Thomas Cynkin, a former U.S. diplomat in Japan, the Japanese have developed a “nuclear latency policy,” which allows Japan to develop nuclear weapons very quickly. Cynkin says the country is estimated to have “9 tons of plutonium, enough for over 1,000 warheads,” as well as an advanced space industry, which provides easy access to ballistic missile technology.

There is no such easy path to nuclear weapons development in South Korea. Nuclear development is openly debated in South Korea, but would infuriate the Chinese and draw retaliation. The Chinese were infuriated by South Korea’s deployment of the Terminal High Altitude Area Defense (THAAD) missile system, which is purely defensive, and China retaliated with a harsh economic boycott that is still in place. Deployment of offensive nuclear weapons would dangerously provoke the Chinese.

North Korea’s last major test was a ballistic missile test that occurred on September 14. The missile flew over Japan, landing in the Pacific Ocean far enough to have put the American base on Guam within range, raising international anxiety. It has been a whole month since that test, so international anxieties have subsided. But all it would take is another North Korean test of a nuclear bomb, or a long-range ballistic missile, or the two combined, and international anxieties will rise higher than ever, along with a new debate over deploying nuclear weapons in Japan and South Korea. The Diplomat and Washington Post and Cipher Brief and National Interest (5-Sep)