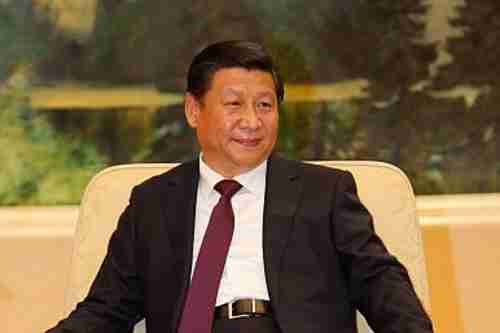 China’s state media and even the international media are bubbling with excitement these days, after China’s president Xi Jinping gave an extremely nationalistic 3-1/2 hour keynote speech at the 19th Chinese Community Party National Congress last week, in which he describe “Socialism with Chinese characteristics for a new era.”

The phrase “Socialism with Chinese characteristics” has been around for a while, but Xi has added “for a new era” to make it his own. “Xi’s Thoughts” will be a new ideology that will bring the “China Dream” to fruition, and by 2050 will make China the world leader militarily and economically, and in political and environmental issues, replacing the United States, and with Socialism replacing Capitalism as the economic system of choice for countries around the world.

Furthermore, Xi’s Thoughts will be made part of the Chinese Communist Party (CCP) constitution, placing Xi Jinping on a par with Mao Zedong among China’s great historic leaders.

What does Xi say China’s new era will look like? Here are some excerpts:

This is a new historic juncture in China’s development.

The Chinese nation, which in the modern era has endured so much for so long, has achieved a tremendous transformation—it has stood up, grown rich, and become strong, and it now embraces the brilliant prospects of rejuvenation.

It will be an era that sees China moving closer to center stage and making greater contributions to mankind.

China’s development does not pose a threat to any other country. No matter what stage of development it reaches, China will never seek hegemony or engage in expansion.

We will make it our mission to see that by 2035, the modernization of our national defense is basically complete, and that by the mid-21st century [2050] our people’s armed forces have been fully transformed into world-class forces.

A military is prepared for war. All military works must adhere to the standards of being able to fight a war and win a war. Our army is the people’s army; our defense is national defense. [We must] enhance the education on national defense education, consolidate the unity between the military and civilian, in order to achieve the Chinese dream of a strong military.

We have the resolve, the confidence, and the ability to defeat ‘Taiwan Independence’ in any form. We will never allow anyone, any organization or any political party, at any time or any form, to separate any part of Chinese territory from China.

Construction on islands and reefs in the South China Sea has seen steady progress.

These claims have to be viewed through the lens of the “24-Character Strategy” (24 Chinese characters) formulated by one of Xi’s predecessors, Deng Xiaoping, in 1990:

Observe calmly; secure our position; cope with affairs calmly; hide our capacities and bide our time; be good at maintaining a low profile; and never claim leadership.

In particular, the claim that China will have a “world class military” by 2050 should be viewed through Deng’s strategy. China is spending many billions of dollars on the military, developing huge weapons systems, a large navy, space technology, and anything else that will permit China to fight a war against the United States long before 2050. If Xi claimed that China has a world-class military today, he would be ridiculed by young Chinese, and he would alarm all the neighboring countries in Asia. The 2050 date is “fake news,” and by proffering it, he does what is necessary to promote the “China Dream” while hiding his true intentions.

The Chinese have become almost completely delusional. Press reports indicate that many Chinese, especially young Chinese, believe that China’s Socialism has already beaten the United States. They point to China’s poverty in the 1970s and claim that the reason that China has become so economically powerful today is that the Socialist dictatorship allows the CCP to force things to happen to prevent a financial crisis.

So the first part of the Chinese delusion is that they think that they have accomplished something that America has not. America has made huge economic gains since the 1970s and developed new technologies in computers, medicine, weaponry, transportation, and in every other field. China has done nothing comparable and, in fact, has had to steal technology from the West. The Chinese want to focus on the Nasdaq crash in 2001 and the Lehman crisis in 2008, but the resilient Western economy has survived them and continued to thrive. And the Chinese should take note of the fact that our Federal Reserve central bank can unilaterally do many of the things the CCP can do to recover from a crisis. So China has not done anything that the West has not done, even if they nurture the delusion that they have.

The second part of the Chinese delusion is that they think that they are immune to financial crises in the future. China is in a huge debt bubble, and when a panic occurs, the bubble will implode much faster than the CCP can print money. Regular readers are aware that Generational Dynamics predicts a major global panic and financial crisis. Western nations will try to recover through monetary and fiscal policy, while China will try to recover through whatever dictatorial methods it can, but this will be a major generational panic and crisis, and neither China nor the West will be immune.

So Socialism has given China nothing that the West does not have but has cost the Chinese people enormously. I sometimes muse what would happen to me in China’s Socialist paradise. I write these Generational Dynamics analyses in Boston, and I feel free to criticize anyone in the world (and there is plenty to criticize). But if I wrote exactly the same things in Beijing, the CCP’s police would drag me out of apartment, throw me into a hole, and hang me by my thumbs. The CCP is increasingly using mobile phones to track everyone’s movements and everyone’s thoughts, and anyone violating CCP rules risks being thrown in jail. South China Morning Post and Quartz and The Diplomat

What is interesting about “Xi’s Thoughts” and “Socialism with Chinese characteristics for a new era” is that there is no difference between them and Hitler’s Thoughts and National Socialism.

I was in school in the 1950s-60s, I was repeatedly told that the difference between Communism and Nazism was that in Communism the government owned all the businesses (which was “good”), while in Nazism it was still a capitalist system (which was “bad”), but the government still controlled everything. That is exactly the economic system that China has today. It is pure National Socialism (Nazism).

Xi’s Thoughts are actually about Nazism with Chinese Characteristics, and it is a very scary development because they provide an ideological framework to justify any military action at any time.

As I’ve written in the past, China is behaving in a highly emotional, irrational, panicky, nationalistic manner, issuing delusional and fabricated evidence to support claims that everybody knows are false claims. This is what makes China so dangerous.

Xi Jinping and the CCP are international criminals for invading and annexing regions in the South China Sea belonging to other countries, in violation of international law, which is what Hitler did. China is building missile systems whose only purpose is to attack American cities, military bases, and aircraft carriers, just as Hitler built its air force to attack Britain. China is preparing to launch a war on its neighbors, as well as on America, which it believes it will win, just has Hitler did. This is all delusional.

Instead, China will cause a catastrophe to itself and the rest of the world. History will look back on China as the worst disaster to the world in history, worse than the Nazis and the Imperial Japanese combined. By 2050, China will be worse off than it was in 1950. Xinhua and BBC and China Daily