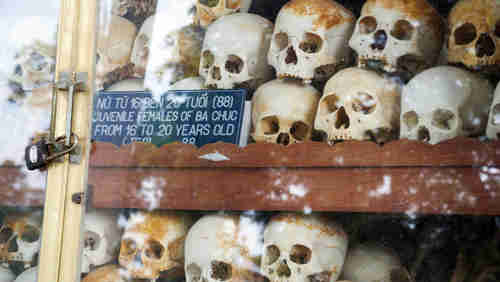 Cambodia’s Supreme Court, believed to be completely controlled by prime minister Hun Sen, ruled on Thursday that Hun Sen’s opposition party should be dissolved, and that its members should be prohibited from political activities:

The supreme court has decided to dissolve the Cambodia National Rescue party [CNRP] and ban 118 individuals … from doing political activities for five years starting from the day of this verdict announcement.

From the point of view of Generational Dynamics, Cambodia is in a generational Awakening era. The Buddhist society of the Khmer Rouge in Cambodia in 1975-79, led by Pol Pot, perpetrated one of the top mass genocides of the 20th century. The genocide killed something like 1.7 to well over 2 million people, out of a population of 8 million. So around 20 percent of Cambodia’s population was killed, making it possibly the worst genocide, on a percentage basis, of the 20th century.

This is exactly the same story that I have been writing about many times recently. A country has a generational crisis civil war where ethnic or tribal groups commit thousands of atrocities, tortures, mutilations, rapes, and killings of each other. All the survivors are traumatized for life, and when one side or the other takes power after the war ends, they continue using some of the same techniques to stay in power indefinitely. We have written about this in Zimbabwe, Democratic Republic of Congo, Rwanda, Uganda, Burundi, Syria, Iran, and elsewhere.

Hun Sen and his Cambodian People’s Party (CPP) have controlled the government since the end of the war, and Hun Sen himself has been the country’s leader since 1985. The crackdown began in 2013, when Hun Sen was declared the winner of a close election whose results were disputed by the opposition party, the Cambodia National Rescue Party (CNRP).

The CNRP has been gaining in popularity since 2013, and many people thought that Hun Sen might be defeated in the 2018 elections, something that he and his supporters would have to prevent at all costs, by any means possible.

So Hun Sen began targeting CNRP leaders, arresting many of them. The CNRP was particularly shocked on September 4 when 100 police showed up at the home of the CNRP leader Kem Sokha and arrested him for treason.

The treason of colluding with foreigners to betray the nation requires [us] to make an immediate arrest.

The third hand [the United States] used to use Lon Nol to conduct a coup [in 1970], now the same problem happened.

It is always fun to see how the United States gets blamed for every problem in the world. This charge of treason was based on a 2013 video in which Kem Sokha spoke of getting US assistance to plan his political career. Hun Sen accused Sokha, his family, journalists, foreign NGOs, the CIA, and the “extremist” ruling party of Taiwan of orchestrating regime change in Cambodia.

If this sounds vaguely familiar to you, it is because it sounds the same as the delusional statement by Zimbabwe’s Commander Chiwenga that we reported yesterday following the Zimbabwe coup, that “our revolution [is] being hijacked by agents of our erstwhile enemies who are now at the brink of returning our country to foreign domination against which so many of our people perished.”

So Hun Sen has been arresting leaders in the opposition CNRP political party, and now has arranged to have the entire party dissolved by the court, so that he can win an election next year. Phnom Penh Post and Guardian (London) and ABS-CBN (Manila) and Phnom Penh Post (5-Sep)

Comparing Awakening Eras in Cambodia, Syria, Zimbabwe and other countries

Possibly the most significant finding from the development of Generational Dynamics these last 15 years was the discovery of the destructive role that generational Awakening eras play in country after country. We have seen this destructive role in today’s article on Cambodia, and in previous articles on countries from Syria to Burundi to Zimbabwe.

In any country, an Awakening era occurs after the Recovery Era that follows a generational crisis war. A generational crisis war is the worst kind of war, because the value of a human life goes to zero at the war’s climax, and the only thing that matters is survival of the country or society and its way of life.

Western nations are not immune from the atrocities of a crisis war. In World War II, American troops were sent onto the beaches of Normandy, even though it was known that tens of thousands of them would be slaughtered. Later, the reverse happened when the Allies firebombed Dresden and Tokyo and then nuked Japanese cities. These events fit the definitions of “war crime” because they targeted large numbers of innocent civilians, and would be described as such if it were not for the fact that Western nations won the war.

In an external war, one nation’s army invades another nation, with the intent to capture territory or resources. There may be atrocities, including torture, rape, and mass slaughter, but in the typical case, when the war ends, the invading army leaves the country that it invaded, and future relations between the two countries can be negotiated through international diplomacy, such as in the United Nations. The two sides do not have to “live with” one another.

But that is very different from an internal civil war, where one tribe or ethnic group fights another within the same country. Typically, the two tribes live in the same cities, neighborhoods, and streets, work in the same businesses, intermarry and allow their children to play with one another.

So for example, in the 1994 Rwanda genocide, the Hutus and Tutsis had lived together for decades, had intermarried, had their kids play games with each other and so forth. Then one day, a Hutu leader announced over the radio, “Cut down the tall trees.” The radio announcement, which was heard all over the country, was some sort of visceral signal. On cue, each Hutu did something like the following: Picked up a machete, went to the Tutsi home next door, or down the street, murdered and dismembered the man and children, raped the wife and then murdered and dismembered her.

So when the war ends, the situation is quite different than in the external war, since these two tribes or ethnic groups still have to live with one another, in the same cities, streets, and neighborhoods. There are always calls for reconciliation and little feel-good news stories, but the horrific atrocities are never forgotten. Even worse, each tribe remembers the atrocities that the other side committed but develops amnesia about the atrocities that its own side committed. And those partial memories are passed down to the children, who come of age during the generational Awakening era.

Generational Dynamics is based on the foundational work on generational theory developed by Strauss and Howe and published in their book The Fourth Turning. That book was brilliant at the time that it was published, but the research is now 25 years old, is badly out of date, and has been shown to contain a number of serious errors.

The core error is the assumption that all generational timelines of all nations are synchronized with each other, and in particular are synchronized with the “Anglo-American timeline” of Britain and North America since the 1400s. The book does not even recognize the concept of Awakening eras in other countries since they are a time of spiritual awakening and new ideas that are only possible in the atmosphere of freedom that occurred in Britain and America. If they exist at all in other countries, then they are synchronized with Britain and America, which does not even make sense since there is no reason why a tribe in mid-Africa should be following the timeline of medieval England.

This core assumption is discarded in Generational Dynamics in favor of the “Principle of Localization,” which says that each society and nation has a separate and distinct generational timeline throughout history, although timelines of two countries can merge at times of massive invasions and genocide.

So now returning to the distinction between external and internal wars, the Awakening eras of different countries are quite different. The spiritual awakening described by the Fourth Turning may occur in America and Britain, but it certainly does not occur in the other countries we have been discussing, the ones that fought tribal or ethnic internal civil wars. In those countries, an Awakening era is a time of government oppression, jailings, and torture, in order to suppress the other tribe or ethnic group.

There is some commonality between the two kinds of Awakening eras. In both cases, they begin 15-20 years after the climax of the preceding crisis war, when the new generation growing up after the war comes of age and can make its voice heard – and does so in riots and youth demonstrations protesting government policies.

In the case of an Awakening era following an external war, these anti-government protests do have a flavor of spiritual awakening, as they did in America in the 1960s. But in countries where the Awakening era follows a tribal or ethnic civil war, these protests are seen by the government leaders as a threat being posed by the tribe or ethnic group on the other side in the war. For that reason, the government leaders suppress them, often violently.

This was true in all the countries that we have been discussing recently and comparing with one another: Cambodia, Iran, Syria, Zimbabwe, Cameroon, Rwanda, Burundi, Uganda, DRC, and so forth. All of these countries are currently in generational Awakening eras following a tribal or ethnic crisis civil war in the 1960s-80s, and they are on completely different timelines than America and Britain. And yet, they are all very similar in that the leaders are doing everything possible to stay in power for decades.

One question that I mm asked frequently is why this analysis does not apply to the American Civil War of the 1860s.

The American civil war was not a war between two tribes or ethnic groups, as the black slaves generally supported the South. The fault line was geographical (North vs South), and so it had the characteristics of an external war. The tribal and ethnic civil wars that I have been talking about occur when two ethnic groups live together, often in the same villages and neighborhoods, and people start raping, torturing and slaughtering their next-door neighbors. This is a highly personal kind of war, very different from an external war, where one country raises an army and invades another country, and then the army withdraws when the war ends. The American North and South were like two separate countries, with very different economies and lifestyles, not like Hutus and Tutsis living next door to each other. That is why that kind of personal civil war could not have occurred, and the two were really more like two separate countries. If the black slaves had risen up and fought against the southern whites, then the Awakening era would have been far bloodier.

There are many events and actions in history that seem completely inexplicable. How could anyone have been so delusional and so stupid as to do X? The Generational Dynamics discovery of the significance of generational Awakening eras in countries after a tribal or ethnic civil war provides answers to many questions that have puzzled historians for decades or even centuries.