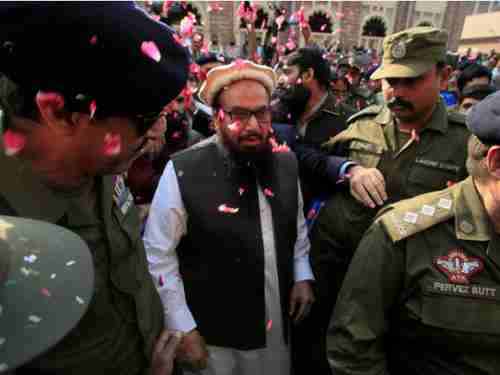 Hafiz Saeed, mastermind of the horrific 2008 26/11 Mumbai massacre, is released from jail and receives cheers and showers of rose petals (Reuters)

Several of Pakistan’s cities are paralyzed by major roads being blocked by thousands of Islamists sitting in, demanding that the government be dissolved. More than 100 people were injured on Saturday in clashes between police and the protesters, after 4,000 police officers were called out to disperse the protesters.

The government has called in the army to help end the protests, but it is unknown whether the army will obey, since many suspect that the army is on the side of the protesters.

By nightfall, the protests had spread to other cities, including Karachi, Lahore, and Quetta, and hundreds had been injured.

Television footage showed a police vehicle on fire, heavy curtains of smoke and fires burning in the streets as officers in heavy riot gear advanced. Protesters, some wearing gas masks, fought back in scattered battles across empty highways and surrounding neighborhoods. The government has reacted by ordering private tv stations off the air, and by blocking social media.

The blasphemy charge is being leveled at the law minister Zahid Hamid, because of a modification to a political oath. The wording of the oath removed the declamation that Mohammed was the last prophet of Islam.

The original wording of the oath has been restored, but that’s not satisfactory to the protesters.

Hamid says that he had nothing to do with changing the wording of the oath. The government is trying to pressure him to resign, and offering to appoint him as ambassador to the country of his choice. He has rejected all such offers, and is quoted as saying, “For god’s sake do not make me another Salman Taseer and bring forth all the officials responsible for the Khatm-e-Nabuwwat fiasco.” (“Khatm-e-Nabuwwat” is the name of the oath).

Salman Taseer, the governor of Punjab province in Pakistan, was shot 28 times in broad daylight in an open marketplace on January 4, 2011. The killer was his bodyguard, Mumtaz Qadri. The motive, as described by Qadri, was to punish Taseer for objecting to Pakistan’s blasphemy laws, and for calling for the release of a Christian woman, Asia Bibi, who was in jail facing execution for violating the blasphemy laws. Qadri was finally executed last year, but not before he became a national hero for killing Taseer over a phony blasphemy charge.

So Hamid does not want to be murdered like Taseer, and his residence has already been ransacked by crazed protesters, shattering windows and destroying furniture. But he is also threatening to reveal the people in government who were actually responsible for the wording change.

Pakistan’s government, governed by Pakistan Muslim League-Nawaz (PML-N), is close to collapse. The former prime minister Nawaz Sharif is still the head of the party, but he was forced out of office by the court in July because he had been accused of corruption and was faced with a trial. Opposition parties are calling for early elections. The government is desperate to end this crisis, but if Hamid continues to refuse to resign, it may not survive. Dawn (Pakistan) and Reuters and Pakistan Today and Express Tribune (Pakistan)

Hafiz Saeed, the head of the now outlawed Lashkar-e-Toiba (LeT) terrorist group, has been freed from house arrest with no trial and all charges dropped.

India and Pakistan were at the brink of war following the November 2008 three-day ’26/11′ terror attack in Mumbai. That attack was perpetrated by Lashkar-e-Toiba (LeT). India threatened to invade Pakistani soil to go after Lashkar-e-Toiba, but Pakistan promised to prosecute LeT members itself. Now Hafiz Saeed, the head of LeT and the mastermind of the Mumbai attack, has been freed by a Pakistan court, greeted by chanting crowds and rose petals.

According to a statement from the White House:

Saeed’s release, after Pakistan’s failure to prosecute or charge him, sends a deeply troubling message about Pakistan’s commitment to [combating] international terrorism and belies Pakistani claims that it will not provide sanctuary for terrorists on its soil.

If Pakistan does not take action to lawfully detain Saeed and charge him for his crimes, its inaction will have repercussions for bilateral relations and for Pakistan’s global reputation.

The exact nature of the “repercussions” was not specified.

This story, and the previous story about the rise of extreme Islamist groups and their ability to shut down entire Pakistan cities, suggest that Pakistan is in the midst of a major political shift that could bring Islamist extremist political parties into power. This is of particular concern in Pakistan, which has nuclear weapons.

There are new Pakistan elections scheduled for 2018, and that may clarify the situation. At the least, talk of peace with India, particularly in Kashmir, is probably not in the cards. Dawn (Pakistan) and Reuters and The Diplomat