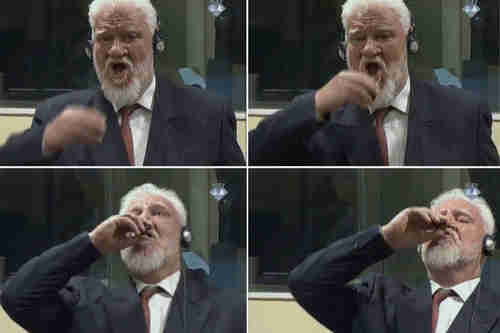 Slobodan Praljak, sentenced to 20 years in prison, drinks poison in a court hearing broadcast live around the world, and dies a few hours later (Getty)

Upon hearing that his 20-year prison sentence had been upheld, Praljak shouted, “I, Slobodan Praljak, reject the verdict! I am not a war criminal!”

The judge ordered him to sit down. He refused to sit down but instead raised his hand as if to be preparing to shout something else. But it turned out that his hand contained a small bottle. He drank from the bottle, and declared, “What I am drinking now is poison.”

Praljak’s lawyer was sitting in front of Praljak, so did not actually see him drink the poison, but she heard what he said. She shouted, “My client says that he has taken poison!”

At that, the judge ordered that the bottle be preserved. The judge shut down the tv coverage and cleared the courtroom. An ambulance arrived to take Praljak to a hospital, where he died several hours later.

Reporters expressed astonishment that Praljak had been able to find a way to bring the bottle of poison with him into the courtroom, and then drink it on international television. The courtroom was supposed to be extremely secure, with the same kind of inspections used in airports. There will be a thorough investigation.

This was the last day of a court case that has been ongoing for years, indicting 161 suspects and convicting 90 of them. The hearing was restarted long enough to read three more judgments upholding the sentences of other Croat commanders. Balkan Insight and AFP and Al Jazeera and Independent (London)

Slobodan Praljak was a Croat commander in the Croat–Bosniak War, which was a sub-war of the larger Bosnian war that took place in the Balkans throughout the early 1990s, following the breakup of Yugoslavia.

From the point of view of Generational Dynamics, Yugoslavia was in a generational Crisis era during the early 1990s. Its previous crisis war had been World War I, and by 1929 the Kingdom of Yugoslavia had been formed, consisting of multiple ethnic groups. World War II was an Awakening era war for Yugoslavia, but by the 1990s, the compromises that had been reached to settle World War I were long forgotten by the younger generations growing up after that war. These younger generations were willing to re-fight the bloody battles that had killed tens of millions of people 70 years earlier.

General Slobodan Praljak was commander of the army of the Croatian Republic of Herzeg-Bosnia (Herzeg-Bosna), which declared independence on November 18, 1991, though it was never recognized by any other country. The goal of the republic was to create an ethnically pure “Greater Croatia.” The goal was never achieved, and Herzeg-Bosnia disappeared around April 1994.

During that three year period, according to the indictment, Slobodan Praljak incited political, ethnic, and religious hatred and had recourse to force, intimidation and terror, notably by mass arrests during which people were killed. He reportedly participated in the establishment and expansion of a system of concentration camps and other detention centers. He also was said to have inflicted cruel treatment on Bosniaks (Bosnian Muslims) by arranging for their expulsion and forced transfer and by submitting those imprisoned to forced labor. The activities included murders, rape, sexual assault, the destruction of property and the deportation of Bosniaks.

In 2013, The International Criminal Tribunal for the Former Yugoslavia (ICTY) found Praljak and five other Croatian commanders guilty of these war crimes and sentenced them to a total of 111 years in jail. The sentences were appealed, and on Wednesday the sentences were reaffirmed.

Prior to the sentencing, Croatia’s interior minister Davor Bozinovic said:

I expect that [the six officials’ guilt] won’t be proven because the Republic of Croatia wasn’t a party in the war in Bosnia and Herzegovina and I hope for a verdict of acquittal.

The court found that this claim was clearly false.

Although the Bosnian war has officially ended, feelings among all the different ethnic groups in the Balkans are still extremely acrimonious. I discovered this this year when I wrote a couple of articles on Macedonia and Albania, and received dozens of the most acrimonious and vitriolic comments that any of my articles have ever received. These comments came from all sides – especially the Macedonians, the Greeks, the Albanians, and the Bulgarians.

Many people believe that after two world wars in the 20th century, there will never be another European war. I can assure you that that is far from the truth. This multi-year trial of Croat commanders that ended on Wednesday was supposed to help resolve old feelings and hatreds, those vitriolic hatreds still exist in full force throughout the Balkans, and will result in war when the time is right. International Criminal Tribunal for the former Yugoslavia (ICTY) and Balkan Insight (29-May-2013) and Trial International and Balkan Insight