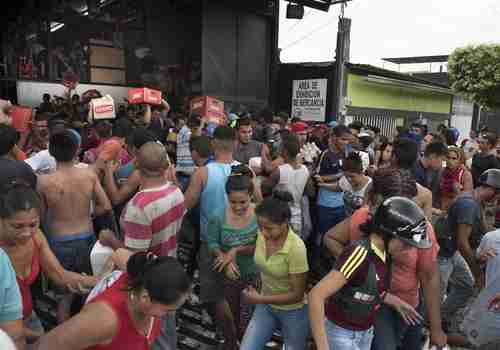 Venezuela’s oil output in January fell to its lowest level in nearly 30 years, with production falling 20 percent from a year ago. Although Venezuela is the wealthiest country in the world in terms of oil reserves, the oil company PDVSA has been nationalized, and the socialist president Nicolás Maduro has turned it over to the dictator’s socialist cronies, who are so corrupt and incompetent they could not operate a bicycle, let alone an oil company. The result is that oil production in the Socialist country has been falling steadily.

Since oil is pretty much Venezuela’s only export that it can use to earn foreign currency (dollars), Venezuela can no longer import food or medicines, which is why people are starving to death and babies are dying in hospitals.

The poverty and hunger rate in the Socialist country have become so disastrous that parents are unable to find food to feed their children. Store shelves are empty of food, medicine, diapers, and baby formula.

The International Monetary Fund forecast that the hyperinflation in Venezuela will hit 13,000 percent in 2018, meaning that even if food were available, it would be unaffordable. Human Rights Watch and other rights groups have accused Venezuela’s government of beating and torturing thousands of people protesting about the economy.

Incredibly, Venezuela’s Socialist government even refuses to accept offers of food and medicine from its neighbors and aid agencies, including the Catholic Church, because to do so would require admitting that the socialist economy was in crisis.

In desperation, some parents are placing their children in orphanages, just so that they can be fed. According to Angélica Pérez, a 32-year-old mother of three, “You don’t know what it’s like to see your children go hungry. You have no idea. I feel like I’m responsible, like I’ve failed them. But I’ve tried everything. There is no work, and they just keep getting thinner. Tell me! What am I supposed to do?”

Other parents are simply leaving their children in the streets in the hope that child protective services will find them and find a home for them. CNN and Miami Herald and Washington Post

Colombia and Brazil close borders to refugees from Venezuela

Colombia and Brazil on Tuesday announced a series of measures to control border crossings from Venezuela, as the socialist economy continues to deteriorate.

With people unable to find jobs or food in Venezuela, waves of refugees have been pouring across the border into Colombia, and to a lesser extent into northwest Brazil.

Colombia’s president Juan Manuel Santos on Tuesday announced that strict immigration controls would be implemented, with 2,120 Colombian soldiers deployed to the 1,378 mile long border to enforce them. In a speech, Santos referred to the time when Venezuelans were kind to Colombians fleeing across the border into Venezuela during the civil war of the 1990s and early 2000s. Santos said:

There will be more control and more security at borders.

Venezuela was very generous to Colombia when Colombians went in search of a better life [during the height of its civil war in the 1990s and early 2000s]. We should also be generous to Venezuela.

I want to repeat to President Maduro — this is the result of your policies, it is not the fault of Colombians and it’s the result of your refusal to receive humanitarian aid which has been offered in every way, not just from Colombia but from the international community.

Brazil’s defense minister, Raul Jungmann, said that Brazil would bolster security along the border and relocate the migrants. “This is a humanitarian drama. The Venezuelans are being expelled from their country by hunger and the lack of jobs and medicine. We are here to bring help and to strengthen the border.” Costa Roca News and Petroleum World and Miami Herald and Brookings

Venezuela fears a military ‘invasion’ by Colombia and U.S.

Tidd’s visit to Colombia has triggered suspicions in Venezuela of a possible invasion by Colombia, backed by the United States. Venezuela’s chief prosecutor said:

In Colombia, they are planning to revive eras that had ended in human history, like military bombing, a military invasion or the occupation, through blood and gunfire, of a peaceful country like Venezuela. We will not allow it.

However, the commander of Colombia’s armed forces replied, “We have so many problems in our own country, and that’s what we are solely dedicated to and focused on. We’re only interested in the problems of the Colombian people.”

Nonetheless, with Venezuela’s economy deteriorating rapidly and the flow of refugees surging, there is growing fear that Venezuela will destabilize the entire region, and that military action must be taken.

Vanessa Neumann of the Foreign Policy Research Institute was interviewed on Fox Business and said that Venezuela is presenting a major security threat to Colombia, because locals are getting into fights with the refugees, and there are terrorists mixing in with the refugees coming across the border.

[Colombia’s] military is sending armored personnel carriers with 50 caliber guns on top to stop the flow [of refugees from Venezuela]. It’s gotten so bad that the locals are beating up the homeless Venezuelan refugees because there’s just too many of them, even though they really consider themselves as brothers.

The other thing is Venezuelans have now joined some of the terrorist groups, because they’ve given them food, and the uniform and the job. They have launched 11 terrorist attacks in Colombia. The Colombians won’t take this sitting down. They will go and cross the border into Venezuela, and then they’ll have military assistance from the United States.

That’s what I see happening, as well as more violence within Venezuela, because of the food. People are now just killing each other for food.

And in the border towns when they do escape I see them, selling gasoline, selling their own hair, selling their bodies, giving away their children. I saw it first-hand last week, and this week it’s much worse. This won’t last much longer.

And now some of the Venezuelans are saying, please — they’ve never really advocated for American intervention before, but now ‘We’re so hungry, this is so bad, please come help us.’