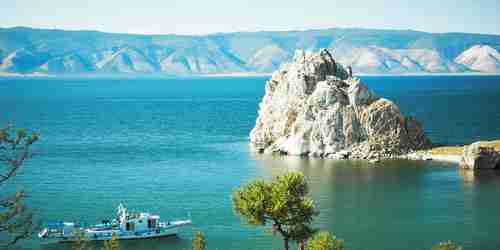 Russia’s Lake Baikal in Siberia. Like regions in the South China Sea, India and Central Asia, the Chinese are claiming that it is their sovereign territory

In 2012, Russia’s prime minister Dmitry Medvedev issued a warning that a huge influx of immigrants from China into Siberia and Far East threatened Russia’s control of the region and its rich resources. He said that it was “important not to allow negative manifestations … including the formation of enclaves made up of foreign citizens.”

Medvedev even went so far as to invite the victims of Japan’s 2011 earthquake to migrate there, at least partially over concern about Chinese migrants. Medvedev discussed offering supplies of food and medical equipment to the Japanese, and added, “In general we must now think about the use, if necessary, of some of the employment potential of our [Japanese] neighbors, especially in sparsely populated areas of Siberia and the Far East.”

Medvedev was right to be concerned. Russia’s Far East suffered rapid depopulation since the fall of the Soviet Union in 1991. During the 1990s, there was enormous poverty and no support from the chaotic Moscow government. As a result, population fell by as much as 50 percent in the region as millions migrated east, mostly to the European part of Russia. According to Medvedev, “More than eight million foreign citizens came to Russia in the first six months of 2012 alone.”

And the flow has continued since then. In just one city, Khabarovsk, about 20 miles from the Chinese border, more than 300 Chinese companies have business operations, investing in almost every major sector of the city’s economy such as trade, construction, lumber and natural resources exploration, hiring thousands of Chinese migrant workers.

It is estimated that 1.5 million Chinese illegal migrant workers arrived in the region between June 2016 and June 2017, most of them doing manual labor. Russia’s Far East is home to only seven million Russians (or just 1.3 per square kilometer), while there are ten times as many people living across the border in the northeastern region of China. Obviously, there is no way for Russian authorities to halt the flow of migrant workers from China. Jamestown and South China Morning Post (8-Jul-2017) and ABC News (14-Jul-2015)

The deepest lake in the world is Russia’s Lake Baikal in Siberia. Its surface area is the size of Belgium. It draws tourists from all over the world, but particularly from China.

Russians are worried that Lake Baikal is drowning in garbage, mostly from the Chinese migrants and tourists. According to Ivan Loginov, head of the public organization New Energy, the problem of garbage around Lake Baikal is a huge problem:

Literally next to any village or place of congestion people form huge mountains of garbage. And the saddest thing is that neither the volunteers nor the municipalities have enough strength to fight garbage. Vicious circle. People come and litter, but they do not have enough understanding that this garbage needs to be cleaned. And if they even collect it for themselves, they leave it on the bank, where it gradually accumulates.

The municipalities do not have enough money to fight garbage. Moreover, the question arises: where should we take this garbage? In Buryatia garbage is not processed, roughly speaking, it is buried underground. And the situation is very deplorable. … And garbage remains on the shores of Lake Baikal.

The rising mountains of garbage are just one of the reasons that local Russians are appalled by Chinese tourists. Chinese guides tell Chinese tourists that Baikal is China’s northern sea, that their ancestors used to live there, and that the territory only belongs to Russia for the time being. These guides also reportedly encourage Chinese visitors to buy property and businesses in order to make money over the next decade. Many are doing so.

Chinese involvement in the region has inspired outrage among Russians for several reasons. First is the massive influx of tourists who often behave badly, use only Chinese facilities and so bring little money to Russian firms, and are hated by the local population. Second, Chinese citizens have been buying up land on Lake Baikal that Russians are not allowed to purchase as well as acquiring various Russian companies. All this has been leading to an influx of Chinese permanent residents. And third, the entirely illegal Chinese logging operations in the region are being protected by Russian criminal groups and Russian officials allied with them.

Chinese tourists, businesses, and migrants are taking control of the region around Lake Baikal. This is not a trivial matter, and will lead to war when the time is ripe. Hong Kong Economic Journal (20-Sep-2017) and NY Times (24-Jul-2016) and Eurasian Business Briefing and Regnum (Russia) and (translation)

The Chinese are increasingly claiming “indisputable sovereignty” over many countries’ regions, including India, several Central Asian states, and of course the South China Sea, where the United Nations Permanent Court of Arbitration in the Hague has ruled that all of China’s activities are illegal.

International law means little to the Chinese, who say that their own laws supersede international law, and give them the right to invade and annex any region they choose, and back it up with their massive and growing military, threatening to kill anyone who disagrees with them.

If China was able to take back Hong Kong from the British on the grounds that the territory was ceded to Britain under an unequal treaty concluded in the 1840s, then why didn’t it reclaim Vladivostok as well, which was also ceded to Russia under another unequal treaty signed in the 1860s?

Vladivostok is the home of Russia’s Pacific Fleet. It is the farthest point east in Russia, and it is connected to Moscow by the Trans-Siberian Railway that runs to and from Moscow in a week-long trip.

Although the Chinese are now claiming Vladivostok as a historically Chinese city, that is probably not true, as it was a city controlled by Manchuria, not China. The Chinese call the city by its Manchurian name, Haishenwai. After China was defeated by the British Opium wars of the 1840s-50s, China was forced to cede Hong Kong to the British, and Vladivostok to the Russians. China annexed Manchuria after World War II, but Vladivostok remained in Russian (Soviet) hands.

Russia’s president Vladimir Putin takes a great deal of pride in Vladivostok and the Pacific Fleet. There is no possibility at all that Vladivostok will be ceded to the Chinese without a full-scale war, despite the demands of the Chinese social media.

As long-time readers have known for years, Generational Dynamics predicts that the world is headed for a new Clash of Civilizations world war, with the “axis” of China, Pakistan and the Sunni Muslim countries pitted against the “allies,” the U.S., India, Russia, and Iran.

I am frequently asked how it is possible that Russia will be a U.S. ally, rather than a Chinese ally. The current alliance between Russia and China is a “marriage of convenience” between the countries because they are both repeating Hitler’s actions of annexing other countries’ regions, and then they support each other in the United Nations.

As we reported last year, China has placed nuclear missiles near the Amur River, which separates China from Russia’s Far East. The nominal purpose of these Chinese missiles is to attack the US, but these and other missile systems can also conveniently target Moscow and other Russian targets.

Historically, the Russian and Chinese people hate each other. In the 1200s, the Mongols under Genghis Khan conquered and dominated China, in a generational crisis war that climaxed in 1206, forming the Mongol Empire, the largest empire in history. In the next generational crisis war, Genghis Khan’s grandson, Kublai Khan, conquered all of China and created the Yuan Dynasty in 1271.

The Mongol Yoke still defines Russian-Chinese attitudes today. Even as recently as the 1960s, China and the Soviet Union almost went to war in the border region with Siberia and the Far East.

There is a certain ironic truth that comes through when you read Russian history. The Russian people and the Chinese people hate each other, but the Russian people like the American people and they love the European people, despite the rhetoric of politicians. In the approaching Clash of Civilizations world war, when Russia is forced to choose between China and the West, they will choose the West. Russia Beyond the Headlines and Way To Russia