The Kerch Strait is in the lower right corner, as the tiny strait that separates Crimea and Russia at their closest points, and also separates the Sea of Azov in the north from the Black Sea in the south.

Ever since Russia invaded and illegally annexed Ukraine’s Crimea Peninsula in 2014, Russia has had the problem of shipping goods between Russia and Crimea.

Russia has taken control of Luhansk and Donetsk in far eastern Ukraine, as well as Crimea itself, but the region along southern Ukraine through the Mariupol and Bardyansk seaports is still under control of Ukraine’s government in Kiev.

For a while, the international community was wondering whether the Russian invaders would continue their invasion through those seaports, to connect a land route from Russia to Crimea and giving them complete control of the Sea of Azov. For whatever reason, possibly because Russia’s president Vladimir Putin feared that such a drastic move might provoke military action from the European Union, no such invasion occurred.

Apparently, the Russians considered several possible solutions, with the obvious choices being a tunnel under or a bridge over the Kerch Strait. The Kerch Strait is shown in the above map in the lower right corner, as the tiny strait that separates Crimea and Russia at their closest points, and also separates the Sea of Azov in the north from the Black Sea in the south.

In May 2015, Russia began constructing an 11.8 mile bridge across the Kerch Strait, said to be the longest bridge in Europe once it is completed. The project will cost an enormous $5 billion, and there are concerns that the strait is not sufficiently geologically stable enough to support the bridge safely. Nonetheless, construction has gone ahead, and the plan is for the bridge to be open to car traffic this year, and open to railroad traffic in 2019.

The construction of the bridge has already had a severe effect on Ukraine’s economy. Russia has several times closed the Kerch Strait to maritime traffic, trapping commercial vessels docked in Mariupol and Berdyansk seaports. During 2017, freight traffic was reduced 43 percent and transshipments shrank by 30 percent, totally $54 million in 2017. The losses are expected to be significantly higher in 2018. Jamestown (22-Feb) and Russia Today (3-Mar) and Guardian (London, 31-Aug-2017) and Völkerrechtsblog (10-Jan) 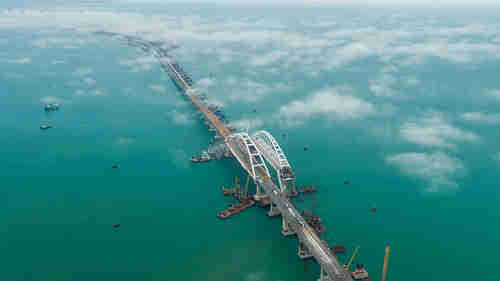 On March 26, Ukraine’s border service in the Sea of Azov seized the fishing vessel Nord on charges of violating Ukraine’s territorial waters. The Russians claim the ship was in international waters. The Ukrainians claim it illegally entered Ukrainian waters when it docked in Crimea without Ukrainian permission.

On Wednesday, April 4, Ukraine’s Border Service spokesman Oleg Slobodyan commented on the detention of Russia’s Nord vessel, and said that Ukraine will detain all the ships traveling to and out of Crimea without Kiev’s consent, Slobodyan said:

Ukraine’s position is unequivocal, it considers Crimea to be an occupied part of its territory so law enforcement agencies will promptly respond to violations committed by those travelling in and out of Crimea.

So the situation is this:

There is potentially a major confrontation brewing here, especially if Ukraine goes through with its new threat of seizing all ships docking in Crimea. So far, this confrontation has been going on relatively quietly, but it could change into a full-blown crisis at any time. Unian (Ukraine) and Sputnik (Russia) and Tass (Russia) and EurAsia Daily (Russia)