Ukraine and Belarus commemorated the 32nd anniversary of the Chernobyl nuclear disaster this week with memorial services and marches.

The Chernobyl incident, the worst civilian nuclear accident in history, began on April 26, 1986.

Radio Free Europe observes that the commemoration in Ukraine, where Chernobyl is located, was a mournful and introspective affair, while the marches in neighboring Belarus were more political in nature:

In Ukraine’s capital, Kyiv, hundreds of people marched at midnight to the Memorial Hill of Chernobyl Heroes where they laid flowers and lit candles. At 1 a.m. on April 26, an Orthodox service and a prayer to commemorate Chernobyl victims were performed at the site.

President Petro Poroshenko, on April 26, wrote on Facebook that Chernobyl “will forever remain an open wound for us.”

“Today, we have to do everything to prevent a repetition of that tragedy … the Chernobyl zone must now become a place of new technologies, a territory of changes,’ Poroshenko wrote.

In Belarus, the opposition plans to hold a march in Minsk known as the “Chernobyl Path” later on April 26.

The march has been held in the Belarusian capital since 1988 to commemorate the disaster in neighboring Ukraine, which also contaminated large swaths of territory in Belarus. 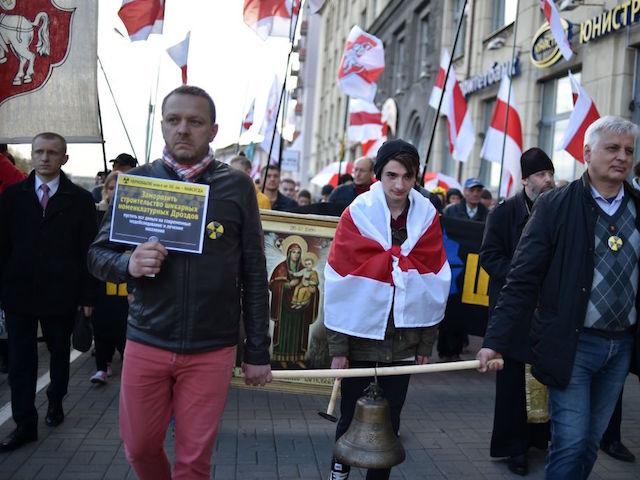 Belarus’ opposition supporters take part in a rally in Minsk, on April 26, 2018, to commemorate the victims of the Chernobyl nuclear disaster on the 32nd anniversary of the tragedy. (Photo by Sergei Gapon/AFP/Getty Images)

President Alexander Lukashenko of Belarus said on Thursday that he has plans to visit areas affected by the Chernobyl disaster. He called the anniversary a “traditionally sad day.”

Belarus absorbed about 70 percent of the radioactive fallout from Chernobyl, leaving up to a fifth of its farmland contaminated and forcing the relocation of half a million people. Humanitarian organization Chernobyl International has estimated Belarus spends about 20 percent of its annual budget dealing with the effects of the disaster, even decades later.

Poroshenko paid a visit to the Chernobyl exclusion zone on Thursday, placing a basket of flowers in Ukraine’s national colors at the Heroes of Chernobyl monument. 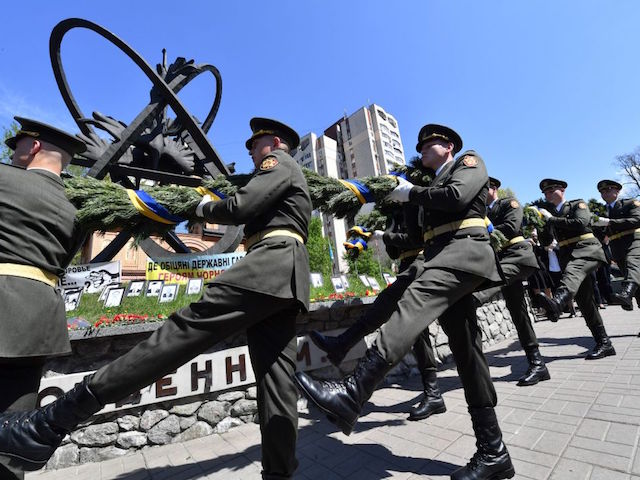 Ukrainian soldiers lay the wreath during a ceremony marking the 32d anniversary of the Chernobyl world’s worst nuclear disaster, at a memorial for the victims in Kiev, on April 26, 2018. SERGEI SUPINSKY/AFP/Getty Images 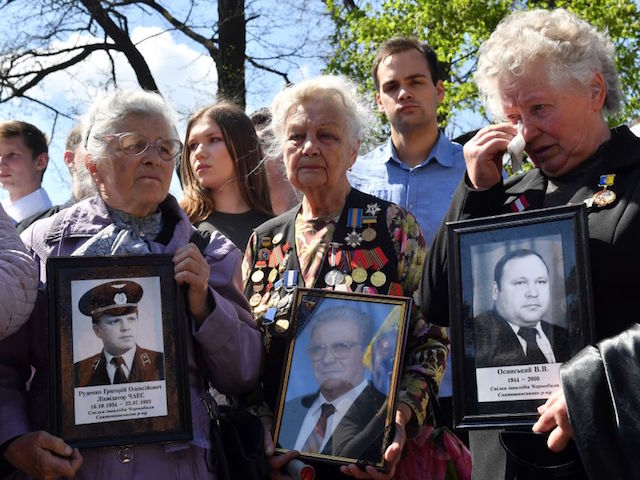 Widows react as they hold pictures of their deceased husbands, who were “liquidators” in Chernobyl, during a ceremony marking the 32d anniversary of the Chernobyl world’s worst nuclear disaster, at a memorial for the victims in Kiev, on April 26, 2018. SERGEI SUPINSKY/AFP/Getty Images 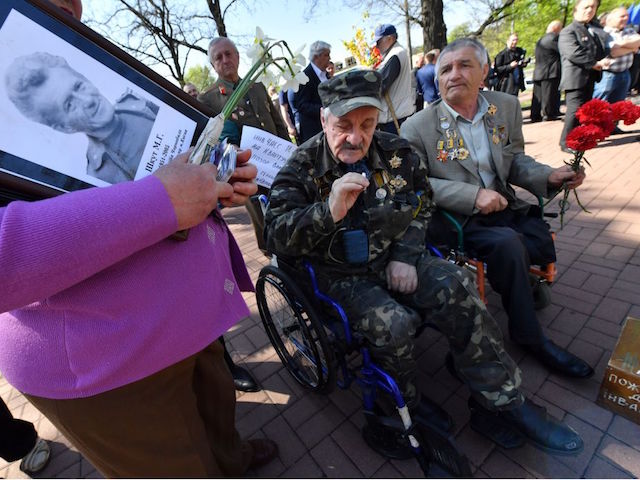 Disabled men in wheelchairs who worked as “liquidators” in Chernobyl, attend a ceremony in tribute to the victims of the Chernobyl nuclear disaster which occured 32 years ago, at a memorial to victims in Kiev, on April 26, 2018. SERGEI SUPINSKY/AFP/Getty Images

The total financial, environmental, and human toll for the disaster is difficult to calculate. Even the more conservative estimates are horrifying. Writing at Time, author Serhii Plokhy notes the United Nations estimated 4,000 deaths tied to Chernobyl over the long run in 2005, while Greenpeace estimated 90,000 or more. The number of cancer deaths caused by radiation from Chernobyl is hotly debated, while genetic damage to children born in the area is even harder to trace.

Plokhy explains how the financial fallout fell more heavily on Belarus and Ukraine than Russia:

Russia’s oil and gas riches helped it deal with the post-Chernobyl crisis, while resource-poor Ukraine and Belarus had nothing comparable. Those two countries introduced a special Chernobyl tax in the early 1990s, amounting in Belarus to 18 percent of all wages paid in the nonagricultural sector.

In general, however, the Belarusian government dealt with the enormous challenge by continuing the Soviet tradition of suppressing investigations of major disasters. Although Belarus was the post-Soviet country most affected by Chernobyl fall-out, its antinuclear movement never attained the proportions of its Ukrainian counterpart. Nor did the Belarusian Popular Front exercise influence comparable to that of the Ukrainian Rukh.

The Belarusian parliament and government lacked the political will and, more importantly, the resources to admit the full scope of the disaster and deal effectively with its consequences. In 1993, the Belarusian parliament adopted laws reducing the levels of soil contamination considered dangerous for human habitation. Even then, with significantly less territory and population covered by social welfare laws, the government only managed to allocate less than 60 percent of the funds approved by legislators for Chernobyl-related programs.

Some residents refused to leave after the accident, including the formidable 86-year-old Baba Gania, who told Ukrainian photographer Alina Rudya, “I am not afraid of radiation. I boil the mushrooms till all the radiation is gone!” After most of her neighbors died, Gania and her sister decided to use a nearby abandoned house to store their coffins.

Mother Nature is proving almost as tough and persistent as Baba Gania. In an eerie pictorial of Chernobyl, Business Insider quotes scientists who say there could be more animals living in the area than there were 30 years ago, including deer, elk, wolves, and bison.

For years, scientists charting the development of the disaster area into a nature preserve have marveled at the resilience of nature, postulating that either the humans who formerly lived there were more dangerous to animal populations than the radiation released by the reactor accident, or even that the radiation had beneficial side effects in some areas. Researchers caution that ill effects have still been noted, some areas were contaminated worse than others, and it is even harder to monitor birth defects and genetic abnormalities in animals than humans.

Deutsche Welle reported Thursday on the remarkable speed with which nature has reclaimed villages abandoned after the Chernobyl disaster. A local biologist demonstrated that herds of wild horses, brought into the area in the Nineties to reduce fire hazards by eating the grass, are thriving after learning how to scavenge for resources like buried salt left behind by the humans.

Also thriving is the Chernobyl tourist industry, which has grown 35 percent since 2016 and now brings about 50,000 tourists through the region annually. There are even souvenir shops hawking T-shirts emblazoned with the radiation danger symbol.

Travel agent Viktor Kharchenko explained to AFP that tourism exploded after the 30th anniversary of Chernobyl in 2016 because a huge “sarcophagus” was constructed over the damaged reactor to great media fanfare, greatly alleviating concerns about radiation levels.

“A day’s stay in the area equals two hours of flying over the Atlantic Ocean in terms of the dose of radiation absorbed,” Kharchenko said.

The tourist experience described by AFP is as weird as one might expect:

The activities on offer include viewing the new shield covering the damaged reactor, feeding gigantic catfish in the radioactive waters of cooling pools, and driving past the ‘red forest’—where pine needles turned from green to red after the accident due to absorbing massive levels of radiation.

The trees were felled and buried during the clean-up operation, but even now, when a tour bus drives past the area without stopping, the tourists’ Geiger counters all start beeping frenetically, signaling a very strong increase in radiation.

‘A symphony,’ one of the tourists said.

Visitors quoted in the AFP piece were surprised and humbled by how quickly animals and vegetation have reclaimed Chernobyl. “It proves that nature is stronger than humans after all,” one of them remarked.