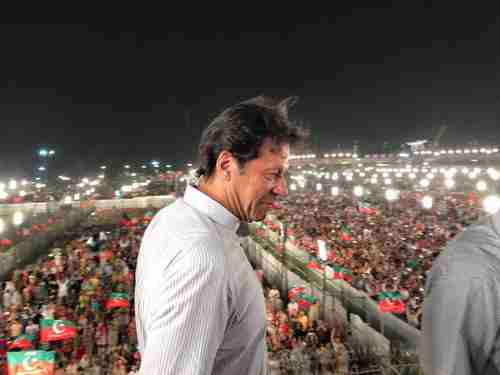 Imran Khan, a Pashtun born in 1952, was one of Pakistan’s greatest cricket players of all time and was once voted as the “Sexiest Man of The Year” by Australian magazine Oz. He turned to politics in the 1990s and has become extremely colorful and extremely anti-American.

On Sunday, Khan officially began his campaign to become prime minister. Khan gave what he described as the most important speech of his life to a huge enthusiastic crowd of supporters in Lahore. This was the same venue as the rally in October 2011, when he stunned observers by drawing 100,000 people to the rally, far exceeding expectations. Saying that “It’s time for a change,” he promised to have closer ties with China, to distance Pakistan from the U.S. and to “convince” India to withdraw its military from the disputed regions of Kashmir and Jammu.

In Sunday’s speech, he provided 11 points for change in Pakistan, in what might be described as a fairy tale worthy of Bernie Sanders. Here is a summary of the 11 points:

Khan referred to the founder of Pakistan, Muhammad Ali Jinnah, by the name Quaid-i-Azam, and said:

The Pakistan that Quaid-e-Azam wanted would afford equal rights to all citizens including the minorities, where the Hindu community, Sikhs, and Christians would be equal citizens. This country was to be formed on the model of Medina, where the basis of law was justice.

Prophet (PBUH) brought the entire Muslim nation towards truth and righteousness by way of his own example. The Muslim nation then ruled the entire world for 700 years but as soon as the royal system of kingdoms was established, the poor became poorer and the rich became richer.

We are on crossroads today, on one end it’s disrespect and on the other, it’s dignity.

The last sentence refers to Khan’s plan to sever all connections that Pakistan has to the United States, claiming that instead of being disrespected by the U.S., this move would restore Pakistan’s dignity.

The speech is totally delusional. If Imran Khan were elected, he would turn Pakistan into another Venezuela. Daily Pakistan and The News (Pakistan)

Pakistan has been plagued by frequent terrorist attacks by al-Qaeda linked jihadist groups, usually part of Tehrik-e-Taliban (TTP, Pakistan Taliban). These attacks have particularly targeted religious minorities in Pakistan. Shia Muslims are targeted most often, along with Hindus, Ahmadis, and Christians.

In his speech on Sunday, Khan gave lip service to a Pakistan “where the Hindu community, Sikhs, and Christians would be equal citizens.” However, the Taliban are radicalized Pashtuns, and Khan himself is a Pashtun and appears to be sympathetic to the Taliban. He is openly supporting the Afghanistan Taliban.

Even though it is clear that the attacks in Pakistan by the Taliban are sectarian-based, Khan insists on blaming them on the Americans and, in particular, on American drone strikes on Taliban terrorists in the Fata (federally administered tribal area along the border with Afghanistan). In 2013, he got his followers to blockade the “Khyber pass,” a major route into Afghanistan that is heavily used by NATO forces to truck equipment between the port of Karachi and NATO bases in Afghanistan. The blockade finally ended in February 2014.

On January 1 of this year, U.S. President Donald Trump tweeted that Pakistan had given nothing to the U.S. but “lies and deceit” and provided “safe haven” to terrorists in return for $33 billion aid over the last 15 years, thinking of American leaders as “fools.”

This infuriated Khan, who accused the U.S. of using Pakistan as a “gun for hire,” and made two proposals:

Two immediate measures can be taken by Pakistan to send an unambiguous message to the U.S.: One, we must immediately remove excessive U.S. diplomatic, non-diplomatic, and intelligence personnel from Pakistan, so that diplomatic parity is established according to international legal norms governing diplomatic relations between two states. Two, we must deny the US GLOC and AIRLOC facilities which we were providing free of cost to the U.S.

The lesson we must learn is never to be used by other for short-term paltry financial benefits ever again. We became a US proxy for a war against the Soviet Union when it entered Afghanistan and we allowed the CIA to create, train and arm Jihadi group on our soil and a decade later we tried to eliminate them as terrorists on U.S. orders.

The last paragraph refers to the 1980s Soviet Union invasion of Afghanistan, when the U.S. secretly funded anti-Soviet Saudi rebels who later turned into al-Qaeda.

If Imran Khan becomes prime minister, it would move Pakistan along this trend line. Khan will follow through on his plans to develop closer relations with China, and to distance Pakistan from America. Times of India (4-Jan)