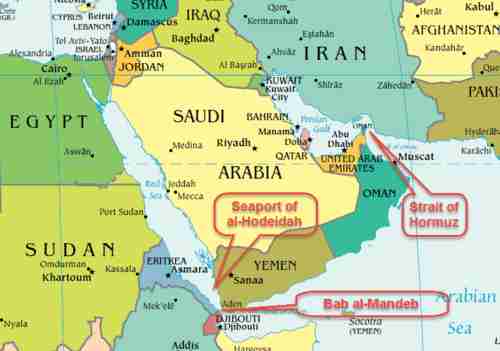 The U.S. military is looking at options to keep two vital waterways, the Strait of Hormuz and the Bab al-Mandeb strait, open to commercial shipping.

The increased concern comes about after Saudi Arabia suspended its oil shipments through the Bab al-Mandeb strait, after a Saudi oil tanker was struck by a missile launched by the Iran-backed Shia Houthis in Yemen.

The missile’s warhead only partially detonated, causing a 2-3 meter hole in the hull, but if it had penetrated deeper and reached the 2 million barrels of oil in ship’s hold, it would have caused a massive environmental disaster.

Saudi Arabia immediately suspended all oil shipments through the Bab al-Mandeb strait. To date, no other exporters have followed suit. A full blockage of the strait would halt shipment to Europe and the United States of about 4.8 million barrels per day of crude oil and refined petroleum products, or result in substantial shipping delays as vessels are rerouted around the southern tip of Africa. The Bab al-Mandeb Strait controls access to the Red Sea and the Suez Canal from the Indian Ocean.

Few people doubt that Iran provided the missiles to the Houthis. However, Debka is going further and reporting that the attack was orchestrated by a disguised Iranian vessel, the Saviz, a weapons-carrying spy ship, which had been under surveillance by Western naval sources for some time, as it was in a holding pattern in the Bab al-Mandeb strait. Debka’s reports are written from Israel’s point of view, based on military and intelligence sources that provide valuable insights. However, as usual, I have to warn readers that they definitely do sometimes get some things wrong.

The Houthi attack is related to the Saudi-led offensive on the Port of Hodeidah, which NGOs use as the major port for humanitarian supplies for the Yemen population, and the Houthis use for the importation of weapons. The purpose of the offensive is to recapture the port from the Houthis. The offensive began on June 12, but has been going badly, and has made little progress, except to deepen the humanitarian crisis in Yemen, which is considered the world’s worst.

The Houthis have targeted Saudi tankers in at least two other attacks this year. According to a Saudi energy consultant, the Saudi announcement about suspending oil shipments was done for security reason, but also has a political dimension, to gain international cooperation in the offensive on Hodeidah:

Rather than allowing these hostile maneuvers to go unnoticed in the eyes of the world, the Saudi (energy) minister has placed Iran’s subversions of the whole global economy under the spotlight for everyone to see. The capture of the port of Hodeidah will go a long way towards putting an end to these disruptions.

Saudi Arabia transports crude oil from its fields in the east, through the Strait of Hormuz, then through the Bab al-Mandeb strait, through the Red Sea and the Suez Canal to Europe and North America. The Saudis have other choices for delivering oil. One possibility is to use the Petroline and east-west pipeline that can transport crude from fields in the east to the Red Sea port of Yanbu, bypassing both of the narrow straits. It could also charter non-Saudi ships to carry the oil through Bab al-Mandeb, which it already with Asian customers using different routes. Reuters and Debka and CNBC

Tensions between the U.S. and Iran have been increasing since the Trump administration pulled out of the nuclear deal in May. Since then, Iran’s rial currency has been plunging to record lows in anticipation of the imposition of new U.S. sanctions on August 7. Some of those sanctions may limit Iran’s ability to sell its oil, and this has led to tit-for-tat threats between the Trump administration and Iranian officials, including a threat by Iran to take military action to shut down the Strait of Hormuz.

It is now clear that Iran is not just threatening the Strait of Hormuz, but is also threatened Bab al-Mandeb.

Reports surfaced over the weekend that the U.S. military was considering what options can be used to keep both Hormuz and Bab al-Mandeb open to commercial traffic, particularly oil tankers.

For example, military studies suggest that an obstruction of Hormuz – by mines, small submarines, “swarming” attacks by boats, and land-based missiles – would be defeated within a few weeks at most by U.S. and allied naval forces. It would also be a casus belli for the U.S. to make a much wider-ranging strike against Iranian military and other targets.

U.S. military officials emphasize that if any military action is taken, it would be carried out by other countries, including Saudi Arabia, Bahrain, Kuwait, Qatar, and the United Arab Emirates (UAE), and not by U.S. forces. The National (UAE) and CNN and Haaretz and National Interest (28-Jun)