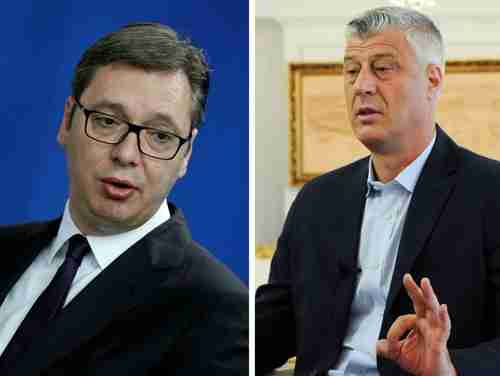 The breakup of Yugoslavia led to the Balkan wars of the 1990s, which were the bloodiest European wars since the end of World War II and have not been completely settled. In particular, there is still a border dispute between Kosovo and Serbia, and there are still NATO peacekeepers in the region.

Neither Serbia nor Kosovo is a member of the European Union, although Serbia is going through the accession process. Kosovo claimed its independence in 2008 and is recognized by the EU, NATO and the U.S., but five countries – Russia, Greece, Cyprus, Serbia, Spain, and Azerbaijan – consider it to be a “fake country” and do not recognize its independence.

But now the leaders of Kosovo and Serbia have say that they have reached a peace agreement between the two countries.

Serbian President Aleksandar Vucic and Kosovar President Hashim Thaci announced an agreement on Saturday to swap some territories and reach a permanent peace agreement. Part of the deal would involve unspecified “border corrections” or “territory swaps” between the two countries. It is believed that the proposal is that four municipalities in the north of Kosovo which host a majority Serbian population could be given to Serbia while Bujanovac and Presevo, municipalities in Serbia with mainly ethnic Albanian populations, might be divided and given to Kosovo.

This proposal has caused something of a panic among the people living in the areas involved. For example, a Serb living in a mostly Albanian region of Serbia would suddenly find that suddenly he is a citizen of Kosovo, and no longer of Serbia.

Another issue is that the deal could set a precedent that other countries might try to follow, including Bosnia and Herzegovina, Macedonia, and Montenegro.

Kosovo is determined to reach a binding legal agreement with Serbia. The time to do this is now. We have a short window of opportunity. It is not easy at all; it is very, very difficult. That’s why everybody has to be behind it.

Despite the widespread opposition to the idea, it may be adopted anyway because it would allow both Serbia and Kosovo to join the European Union. The (laughable) theory is that once both countries are in the EU, then the border adjustment will not make any difference because borders will no longer matter. Euro News and B92 (Serbia) and Bloomberg

There are certainly plenty of historical examples to show that setting borders to separate different ethnic groups does not always work and may never work. An example that comes to mind is the 1947 agreement to partition the Indian subcontinent, supposedly putting all the Hindus into India and all the Muslims into Pakistan. The result was the Partition War, one of the bloodiest wars of the twentieth century, when Muslims in India traveled to Pakistan, and Hindus in Pakistan traveled to India, with any property disputes settled by murder. That war has not been settled to this day, with the threat of a new war in Kashmir and Jammu.

So it is not surprising that three former High Representative’s for Bosnia and Herzegovina – Carl Bildt, Paddy Ashdown, and Christian Schwarz-Schilling – are expressing strong objections to the land swap proposal. In the letter they wrote jointly, they said:

We know Bosnia and Herzegovina well enough to know that this will give comfort and support to those who would break up the country, who are already calling for a return to the status quo ante in Dayton, unravelling all we and our Bosnian partners have worked for over more than two decades.

We know the EU and Europe well enough to know that our principles and our bloody history teach us that sustainable peace can only come when we learn to live in multi-ethnic communities, rather than re-drawing borders to create mono-ethnic ones;

We can in short, think of no policy more likely to lead us back to division and conflict in the Balkans than the one which some are apparently now supporting.

Paddy Ashdown, interviewed on the BBC, added the following about the border adjustments (my transcription):

But in reality, I think it will set in train a series of events that will certainly add to those who want to destabilize Bosnia Herzegovina, certainly undermine the possibility of the solution in Macedonia, and if it should happen, it will certainly institute a movement of population of minorities from all of those areas back to their home territory, and by the way it will be hugely comforting to Vladimir Putin who is trying to do exactly the same thing in Ukraine. It’s a very, very very bad thing, and a very dangerous one.

I’ve been the high representative in Bosnia for four years in this matter, and I could have always, in a heartbeat, in a murmer, have got all of the national leaders, the ethnic leaders of their populations, to divide the country up into little ethnic pockets to preserve their ability to exercise control over their people. But the founding principle of Europe, one that we have learned for over a thousand years of bloodshed, is that we do not redraw borders to make nationally or ethnically homogeneous areas. We can make peace in a multi-ethnic spaces that are already there. And this is going exactly against what the practice in the Balkans have so far been, it will institute a round of border changes and I have no doubt whatsoever that it will destabilize states, it will move towards more ethnically pure states that are bound to come into conflicts with each other, and will offend the European principle that we do not redraw borders.

The positive suggestion is that we continue to try to make sure that the borders that have been drawn in Kosovo are ones in which everybody across the whole of Kosovo can join the European Union, and if they achieve standards to do so, then borders won’t matter.

It is interesting that those who support territory swaps and those who oppose territory swaps predict the same outcomes: that borders will no longer matter. I know of no historical precedent to support that assumption, and it is hard to believe that Ashdown or anyone who is familiar with the history of the Balkans could possibly believe that.

From the point of view of Generational Dynamics, The Balkans region, which has been the site of repeated crisis wars throughout history between the Christian civilization and the Muslim civilization, may well provide the start of the next major European war. Balkan Insight and Paddy Ashdown and N1 (Balkans) and Map Universal