Iran diplomats and sleeper cells arrested in France and across Europe 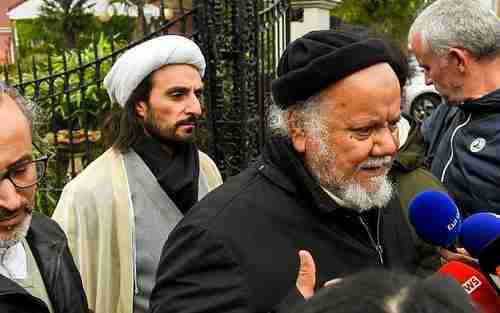 Gouasmi Yahia (R), founder of the Zahra Center France religious association, speaks to reporters after his offices were raided by police on Tuesday (AFP)

On Monday, a German court agreed to extradite Assadollah Assadi, an Iranian diplomat, who is accused of handing a bomb to the attackers planning a June 30 bombing of a meeting near Paris of an anti-Iran regime group, the MEK. Although Assadi is based in Vienna, Austria, his actions took place while he was on vacation in Germany, so the German court stripped him of his diplomatic immunity and allowed him to be extradited to Belgium.

Assadi is an Iranian diplomat and intelligence agent. He is accused of meeting a Belgian husband and wife sleeper cell in Luxembourg, where he handed them the explosives. The explosives were discovered in Belgium by Belgian police when they stopped a Mercedes car driven by the Antwerp-based Iranian couple and found the explosives hidden inside a toiletries bag. The police took the husband and wife team into custody and requested extradition of Assadi from Germany.

The planned target of the June 30 attack was in Villepinte, northeast of Paris, and another man accused of being an accomplice was arrested in Paris on Monday.

France also seized assets in Paris belonging to Tehran’s intelligence services and the Iranian husband and wife arrested in Belgium.

A French official said that Iran’s deputy minister and director general of intelligence, Saeid Hashemi Moghadam, had ordered the attack and Assadollah Asadi, who is still in Germany to be extradited to Belgium, had masterminded the plot. According to the official:

Behind all this was a long, meticulous and detailed investigation by our (intelligence) services that enabled us to reach the conclusion, without any doubt, that responsibility fell on the Iranian intelligence ministry.

However, after Belgium announced on June 30 that they had foiled the Iranian bombing operation, Iran’s foreign minister Javad Zarif tweeted the following:

How convenient. Just as we embark on a presidential visit to Europe, an alleged Iranian operation and its “plotters” arrested. Iran unequivocally condemns all violence & terror anywhere, and is ready to work with all concerned to uncover what is a sinister false flag ploy. 3:57 PM, Jul 2 2018

Zarav and the Iranians have continued to deny any connection to the June 30 plot, but Monday’s arrests indicate that police in France, Belgium, Germany and Luxembourg now believe that they’ve connected the dots to prove the Iranian terror plot.

On Tuesday, the French government issued the following statement:

An attack attempt was foiled in Villepinte [near Paris] on June 30. This act of extreme severity planned on our soil could not remain without response. By an October 2, 2018 order from the Minister of State, the Minister of the Interior, and the Minister of Economy and Finance … France has taken … preventative measures by freezing the assets of Iranian nationals Assadollah Asadi and [Iranian deputy minister of Intelligence in charge of operations] Saeid Hashemi Moghadam, as well as of the Directorate of Internal Security of the Iranian Ministry of Intelligence. In taking this decision, France reiterates its determination to fight terrorism, especially on its own soil.

On Tuesday, French police raided the al-Zhara mosque in the small town of Grande-Synthe near Dunkirk in northern France. Police had been monitoring the activities of the mosque, especially its leader, Yahia Gouasmi, who is known for anti-Zionist views and ties to Iran, Hezbollah and Hamas. However, it is not clear whether this arrest is also related to the June 30 bombing attempt.

This series of arrests across Europe is going to bring Iran-EU relations, especially Iran-France relations, to a new low. This is highly significant at a time when Iran is begging the Europeans to find a way around the US sanctions on Iran that the Trump administration imposed after withdrawing from the nuclear agreement. BBC and The National (UAE) and Deutsche Welle and Middle East Media Research Institute (MEMRI)

The foiled June 30 attack was targeting a meeting of the National Council of Resistance of Iran (NCRI), which is the political arm of the dissident group People’s Mojahedin Organization of Iran (PMOI/Mujahideen-el-Khalq, MEK), which Iran says is a terrorist organization – as did the U.S. State Department from 1997 to 2012.

The MEK was formed in the 1960s to overthrow the Shah of Iran. As I described in my new book, Iran’s Struggle for Supremacy: Tehran’s Obsession to Redraw the Map of the Middle East, the MEK helped Ruhollah Khomeini overthrow the Shah in the 1979 Islamic Revolution, but then turned against Khomeini because he was worse than the Shah.

In July 1988, Khomeini’s ordered the massacre of tens of thousands of political prisoners and political enemies, especially those in the MEK. He issued this decree:

Whoever at any stage continues to belong to the PMOI must be executed. Annihilate the enemies of Islam immediately! … Those who are in prisons throughout the country and remain steadfast in their support for PMOI are waging war on God and are condemned to execution. … It is naive to show mercy to those who wage war on God.

I described in my book how he did this: modifying Shia Islam theology by naming himself to the be modern version of Shia Islam’s infallible Imams. However, the infallible Imam Khomeini used his power to conduct torture, rape, multilation, and slaughter of his political enemies, including members of the MEK.

In my article on the December protests in Iran, I listed about 20 of the slogans chanted, many of them quite vicious. These chants were collected and publicized by MEK activists.

The MEK has remained an anti-government protest organization, and it is not at all surprising that Iran would sponsor explosions and other terror attacks on the MEK in Paris and elsewhere. The MEK has been extremely effective in exposing the hypocrisy of the Iranian regime, and in encouraging anti-government protests within Iran. Al-Jazeera and AFP and Washington Examiner and Euro News

John J. Xenakis is the author of the book, Iran’s Struggle for Supremacy: Tehran’s Obsession to Redraw the Map of the Middle East, available on Amazon for $5 for the digital version or $7 for the paperback version.