Zimbabwe proposes to compensate some white farmers whose lands were seized 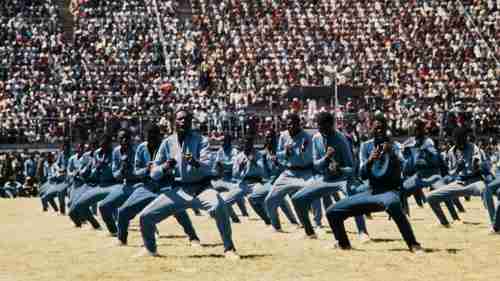 The Norea Korea-trained Fifth Brigade of Mugabe’s Zimbabwean army demonstrates karate in May 1984 at Rufaro Statium in Harare, Zimbabwe. In 1983, the Fifth Brigade committed a massive slaughter of the Ndebele tribe in a massive genocide called Operation Gukurahundi

In the 1990s, Zimbabwe used to be the breadbasket of southern Africa, growing much more food than the country needed and exporting the rest. Then, in 1999, Robert Mugabe instituted a “land reform” plan. The Mugabe government seized, without compensation, farms owned by white farmers, farms that were operating well and producing a great deal of food. The farms were given to cronies in Mugabe’s Shona tribe who knew nothing about farming. By 2002, Zimbabwe’s farmland was in ruin and people were starving. Zimbabwe had been a food exporter, but became a food importer.

Now suddenly, and unexpectedly, Zimbabwe’s government is proposing to compensate white farmers whose land was seized without compensation. On Thursday, Zimbabwe’s finance minister Mthuli Ncube, who was trained at the University of Cambridge and was appointed to his new post in September, issued his proposed budget for 2019. Buried deep in his budget document are the following paragraphs:

202. Government is committed to finalizing the issue of compensation to former white farm owners who were affected by the Land Reform Programme, in accordance with the country’s law and commitments under the various bilateral agreements and the Constitution.

206. In the interim, the 2019 Budget proposes to avail US$53 million towards payment of compensation to former white farm owners, whose disbursement will be targeted.

The proposal acknowledges that the $53 million in the budget is only a tiny fraction of the total compensation that would be required, so this is only a first step. But why do it at all? Has the government of Zimbabwe suddenly developed a conscience?

The answer is that Zimbabwe is no longer able to borrow money from the World Bank until some of Zimbabwe’s previous debts have been resolved. In particular, the United States is demanding that Zimbabwe provide at least partial restitution to for land seized from white farmers before it will approve of any further World Bank loan to Zimbabwe. So Ncube is proposing a nominal payment of restitution to white farmers so that Zimbabwe, which is drowning in debt already, might be able to borrow more money from the World Bank.

So Zimbabwe is being forced, most assuredly against its will, to compensate white farmers for stolen land, so that Zimbabwe can go further into debt. That sounds like Karmic justice to me.

According to the World Bank:

Zimbabwe has enormous potential given its generous endowment of natural resources, an existing stock of public infrastructure, and comparatively well skilled human resources. However, realizing this will require prompt action to correct fiscal policies, re-stabilize the monetary system, and resolve arrears to international lenders that would allow for a resumption of development financing.

After Mugabe’s land seizures left the farmlands in ruin and the people starving, Zimbabwe began importing food. Mugabe was printing money to pay for imports, causing rapid inflation and then hyperinflation, which exceeded one million percent by 2009, making Zimbabwe currency worth less than toilet paper. Half the population was in severe poverty, with the greatest poverty among Mugabe’s hated enemy, the Ndebele tribe.

The U.S. dollar became the official currency and, for a few years, the economy started to grow again. But in 2016, Mugabe started spending lavishly again, resulting in unsustainable fiscal deficits and a cutoff of World Bank loans.

Since Zimbabwe was running out of foreign reserves (U.S. dollars), Mugabe in December 2016 introduced the bond note, a new paper currency with each bond note worth one U.S. dollar. Mugabe said that only a limited number of bond notes would be printed so that hyperinflation would not recur.

The inflation print fails to account for the widening black market premium and therefore does not show the actual rate at which prices are rising in the informal market. October’s rapid increase in prices is likely to lead to even more confusion and panic among local consumers.