More than a quarter of the opium poppies grown in Afghanistan last year came from districts controlled or influenced by the Afghan government, the U.S. Special Inspector General for Afghanistan Reconstruction (SIGAR), a watchdog agency, reported Thursday.

Of the more than $132 billion in U.S. taxpayer funds invested in nation-building efforts since the war started in October 2001, the American government has reportedly devoted nearly $9 billion on counternarcotics operations in Afghanistan.

The country remains the world’s top producer of opium, the main ingredient in heroin. Some Afghan heroin is fueling the overdose epidemic that has killed tens of thousands in the United States, SIGAR reported late last year.

In its most recent quarterly (October 1 thru December 31) report to Congress unveiled on Thursday, SIGAR pointed out:

“The cumulative opium seizures for the approximate past decade is merely 7.5% of this year’s total opium production result [6,400 tons] reported by [the U.N.],” the report added.

SIGAR’s report on Thursday acknowledged that, in Afghanistan, the vast majority of opium is cultivated in territory controlled or contested by terrorist groups, mainly the Taliban. Yet John Sopko, the inspector general, determined that a “significant” amount of poppies are cultivated in government-controlled or -influenced districts. 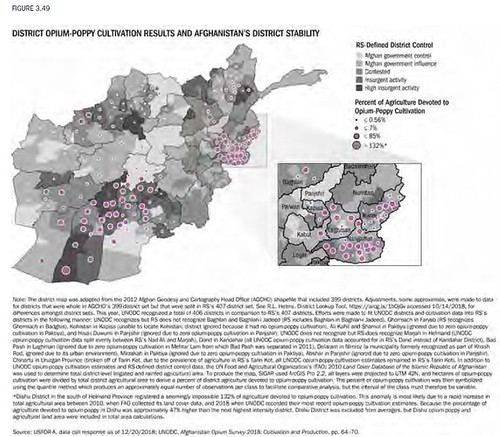 While the U.S. Department of State “predicted that consolidating MCN’s responsibilities into the other ministries should have minimal effect on programs,” Sopko “is concerned about the impact of MCN’s dissolution on counternarcotics programs and the lack of a stand-alone U.S. government counternarcotics strategy.”

“The fight against illicit narcotics does not appear to be a consistent priority either for the international community or the Afghan government,” it added.

State argued that “U.S. counternarcotics efforts are interwoven into the Administration’s South Asia strategy” – primarily focused on pressuring the Taliban into a negotiated “political reconciliation” with the Afghan government to end the war.

The inspector general has criticized the air campaign as too costly and only making a small dent on the illicit opium market. It takes the terrorist group a few “days” to replace the drug labs, estimated by the DEA to number between 400 and 500 “at any given time,” SIGAR found.

At the end of October 2018, Sopko acknowledged that Afghan heroin “contributes a minimal amount” to the unprecedented lethal overdose epidemic in the United States.

According to the Drug Enforcement Agency, a component of the U.S. Department of Justice (DOJ), the vast majority of heroin in the U.S. originates in Latin America.

Taliban narco-jihadis generate over 60 percent of their annual income, estimated to be at least $400 million, from illicit narcotics. In the wake of historic opium cultivation and production in Afghanistan, BBC noted in December 2018 that the Taliban’s revenue may “have significantly increased in recent years and could be as high as $1.5 billion.”

In June 2018, a top State official told American lawmakers that the U.S. military airstrikes only target Taliban-linked heroin labs, not non-insurgent farmers or the actual crops.

The official further explained that the Afghan government is not interested in crop eradication right now, so the American military is going after the heroin labs instead.

It is unclear whether or not the United States plans to push the Taliban to abandon its opium-related activities as part of a potential peace agreement.