China’s state-run media attempted to flip the script on the coronavirus by claiming the United States botched its response to the epidemic and is concealing hundreds of infections.

An even more insidious line of Chinese Communist propaganda advanced from claiming the virus originated outside China to suggesting it came from America.

The problem, as has been heatedly debated on cable news in recent days, is with respect to the testing kits provided by the federal government. Only a few hundred tests have been conducted so far and many proved inaccurate. The Centers for Disease Control and Prevention (CDC) admitted as much that on February 12, attributing the problem to one of the substances used in the test that “wasn’t performing consistently.” Dr Matt McCarthy, an emergency respiratory disease doctor from a hospital in New York City went on CNBC’s Squawk Box to state, “That is a national scandal. They are testing 10,000 cases a day in some countries, and we can’t get this off the ground.”

In the meantime, the Democrats are smelling blood, amid hectic primary campaign of an election year. The Trump administration’s coronavirus handling issue is becoming a political weapon used by the Democrats in the hope of taking down this president, who has even called the coronavirus a Democrats’ “hoax.” Instead of mobilizing national resources to combat the vicious disease, Washington politicians have chosen to play political games.

American people need help. American people don’t deserve this. And I think China can donate a number of COVID-19 testing kits to Washington on an emergency basis.

Let us be honest here. Yes, China-US relations have been on a rocky road lately. The current US administration has waged a trade war against China, imposing horrendous tariffs on Chinese products. It has suppressed Huawei in all possible ways. And recently it imposed personnel cap on Chinese media outlets’ operation in the US.

When they go low, we reciprocate by going higher. We need to save lives. Every human being on this planet, no matter their ethnicity, political belief or religious faith  is worth our effort.

As an example of the convergence of Chinese Communist Party and U.S. Democrat Party rhetoric, “when they go low, we go high” was a slogan deployed by former First Lady Michelle Obama at the 2016 Democrat national convention. China’s editorialists may not realize that the slogan has since become the subject of widespread mockery since the Democrats most certainly did not “go high” after losing the 2016 presidential election.

The Chinese Communist Party was deeply humiliated by the coronavirus epidemic, terrified of losing its grip on an angry populace, and prone to rejecting American offers of assistance as everything from thinly-veiled racism to a nefarious plot to give U.S. Special Forces commandos a chance to raid Chinese medical laboratories. The arrival of the coronavirus in the United States appears to the Communists as an opportunity to reverse every criticism leveled at them and throw them back at the American government.

The Chinese might have waited a bit longer to implement this political strategy, since there is much anxiety about the coronavirus in the U.S. – and, as noted, the Democrats have aggressively politicized it – but the actual number of cases to date remains low.

There are 90,000 known cases and 3,000 deaths worldwide, but only 162 cases and 11 fatalities in the United States. Emergency measures are going into effect early to prevent the disease from spreading, a far cry from the secretive and paranoid Chinese government unleashing a pandemic upon the world by attempting to pretend the epidemic did not exist during its crucial early weeks and punishing whistleblower doctors. To this day, the Chinese government is putting lives at risk by censoring discussions of the coronavirus and blocking useful but embarrassing information online. 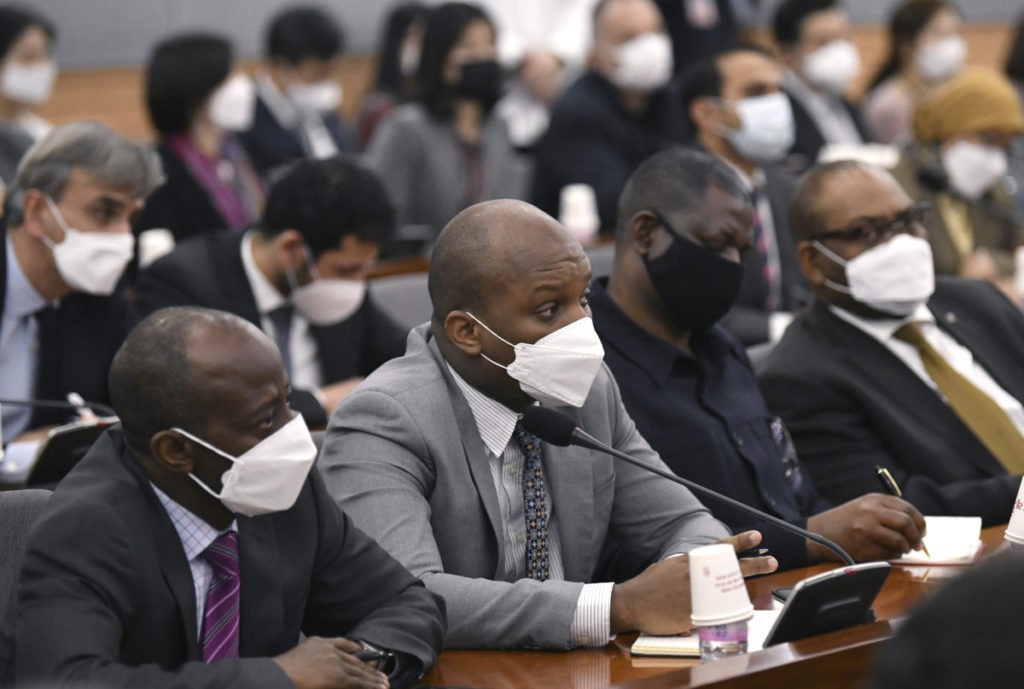 Foreign diplomats wearing face masks attend at a briefing by South Korean Foreign Minister Kang Kyung-wha on the situation of the COVID-19 outbreak in Korea, at the foreign ministry in Seoul Friday, March 6, 2020. (Jung Yeon-je /Pool Photo via AP)

Having successfully bullied the world medical community out of referring to the disease with a name incorporating Wuhan, China is now putting some effort into clouding the origins of the virus by floating theories that it did not come from Wuhan or even China at all.

This week, those theories mutated into dark mutterings that the virus actually came from America, and since the first cases with no direct link to China are only just appearing in the U.S., the heavy implication is that America released the virus deliberately in China.

This, again, is a reversal of speculation embarrassing to the Chinese Communist Party that the virus either escaped from, or was deliberately developed at, an advanced microbiology laboratory near Wuhan. It would also appear to mark the end of China’s old talking point that the coronavirus is less dangerous than the common flu and America was overreacting by warning of a pandemic.

The Epoch Times on Thursday spotted the first cases of “America created the coronavirus” meme infection in the Chinese press:

It started when China’s top virology expert Zhong Nanshan said at a press conference on Feb. 27 that there was a possibility the novel coronavirus did not originate from China.

That same day, a Taiwanese politician named Pan Hwai-tzong said during a television program that aired on the pro-Beijing cable channel EBC News: “The coronavirus is from the United States.” Pan is a councillor from Taipei city, and a professor at the Taiwan National Yang-Ming University.

Chinese media republished this claim by Pan. Some professors in mainland China have since clarified in media interviews that Pan’s comments have no scientific basis.

The Epoch Times quoted speculation that China is floating these theories as a way to refocus Chinese public anger on the U.S. instead of their own rulers.

The New York Times thought the stress of the coronavirus epidemic might have “weakened China’s powerful propaganda machine,” but last week conceded that the spin cycle on that machine still seems to work all too well:

The state-run news media has hailed China’s response to the outbreak as a model for the world, accusing countries like the United States and South Korea of acting sluggishly to contain the spread.

“Some countries slow to respond to virus,” read a recent headline from Global Times, a stridently nationalistic tabloid controlled by the Chinese government.

Online influencers have trumpeted China’s use of Mao-style social controls to achieve containment, using the hash tag, “The Chinese method is the only method that has proved successful.”

Party officials have tried to spin the crisis as a testament to the strength of China’s authoritarian system and its hard-line leader, Xi Jinping, even announcing plans to publish a book in six languages about the outbreak that portrays him as a “major power leader” with “care for the people.”

The NYT suggested spinning the outbreak is vital to China’s global ambitions, which require a great deal of commerce and travel with Third World nations as Beijing sets its debt traps and expands its sphere of influence.

Now that the scale of the epidemic can no longer be denied and many countries around the world are dealing with their own outbreaks, the Chinese Communist Party desperately needs to present itself as a model of leadership and responsibility. China’s state-run Xinhua news service did its part last week with an “online poll” that asked participants which aspect of China’s amazing response to the epidemic “impresses you most.” There were no bad answers, only a choice of which one of Beijing’s successes was most astounding.