An ongoing project, Serbia’s installation of Huawei surveillance cameras in the national capital, Belgrade, has been documented since August 2018, though it is possible that the endeavor began earlier. Serbia’s interior ministry formally announced the project’s launch in January 2019, describing it as a crime-fighting initiative that would increase people’s safety. Serbian police officials said at the time that the cameras would be used to locate criminals and terrorists.

“The cameras are believed to be purchased from the Chinese Huawei company since [Serbian Interior Minister] Stefanovic had a meeting with a security official from Beijing a year and a half ago after the two countries signed an agreement on technical cooperation in infrastructure,” CNN International’s Balkan affiliate N1 reported in January 2019.

As part of the agreement, Belgrade plans to install 2,000 “high-definition cameras, which use facial and license plate recognition software, in 800 locations across the Serbian capital over the next two years,” Foreign Policy reported in June 2019. 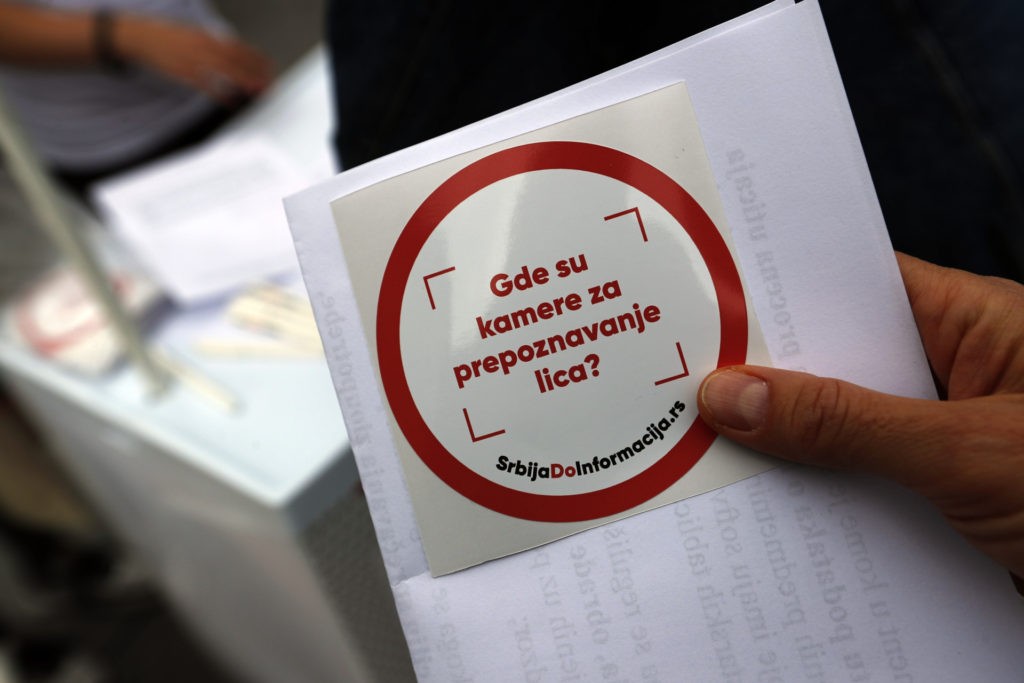 In this photo taken Sept. 25, 2019, an activist in the Serbian capital, Belgrade, shares stickers that read: ”Where are cameras for face recognition?” With public authorities disclosing little about how the surveillance system works, the rights group has set up a tent to ask pedestrians whether they know they are being watched. (AP Photo/Darko Vojinovic)

“Serbia purchased the cameras as well as an artificial intelligence system used to analyze the feed that they capture,” Exit News noted. “The cameras … capture an image of facial features before analyzing them to identify the individual against [an] existing database.”

Serbia’s purchase of the Chinese-owned surveillance system poses a major national security threat and could hinder its efforts to join the European Union (E.U.).

“Serbia’s plans have already raised eyebrows in European Parliament. In October 2019, [Members of European Parliament] MEPs Mara Bizotto and Anna Bonfrisco noted that under the Chinese National Security Act, all data in the possession of Huawei belongs to the [Chinese] Communist Party intelligence services,” the report noted.

Malta, an established E.U. country, “previously announced it would be creating a similar Safe City [system] via the deployment of biometric surveillance cameras from Huawei around the island. It was instantly met with condemnation and outrage [by the E.U.] and the government [was] forced to shelve the plans,” Exit recalled.

Human rights organizations in Serbia have criticized the Huawei surveillance system as “unlawful,” a serious threat to citizens’ civil rights, and a possible violation of the country’s constitution.

According to the report, the Serbian Commissioner for Information of Public Importance and Personal Data Protection says there is “no legal basis for the way the government plans to use the cameras as current laws do not specify what kind of biometric data can be captured by authorities.”