A police officer in Beirut was reportedly killed on Saturday and hundreds were injured as angry protests swept the devastated city over the weekend.

Demonstrators called for an uprising and demanded the resignation of President Michel Aoun after last Tuesday’s horrific explosion at the Port of Beirut, which killed 158 people and wounded 6,000 as of the latest count.

Reuters counted at least 10,000 people thronging Martyr’s Square in Beirut on Saturday, the largest demonstration since last October, when protesters marched against corruption and government incompetence.

The square became a “battle zone” when protesters tried to push past police barricades to enter Lebanon’s parliamentary headquarters, the offices of various ministries, and the Association of Lebanese Banks.

Several of these buildings were penetrated, including the foreign ministry, where occupying protesters burned a portrait of President Aoun. A fire broke out near the Parliament building.

“One policeman was killed and the Red Cross said more than 170 people were injured in clashes,” Reuters reported. The police officer is said to have plummeted to his death down an elevator shaft while fleeing from a mob of protesters.

The Lebanese army said on Sunday that at least 105 of its troops were injured during the protests, including eight officers.

Demonstrators who spoke to foreign news agencies were furious at their government, calling for continued protests and vowing to defy the police until some measure of accountability for the Tuesday blast is achieved. Some demonstrators brought homemade gibbets to the square to emphasize their point that “every leader who oppresses us should be hanged.”

“Resignation or hang,” a popular banner declared, while crowds chanted for the entire government to fall. The Maronite Christian Patriarch of Lebanon, Bechara Boutros al-Rai, said during his Sunday sermon the “whole government should resign, as it is unable to help the country recover.”

Several top government ministers have indeed resigned, including the information, environment, and justice ministers. Finance Minister Ghazi Wazni is close to resigning, according to inside sources.

Al Jazeera News noted Lebanon was “in a dire strait even before the enormous explosion,” and the public was already out of patience with their corrupt government. 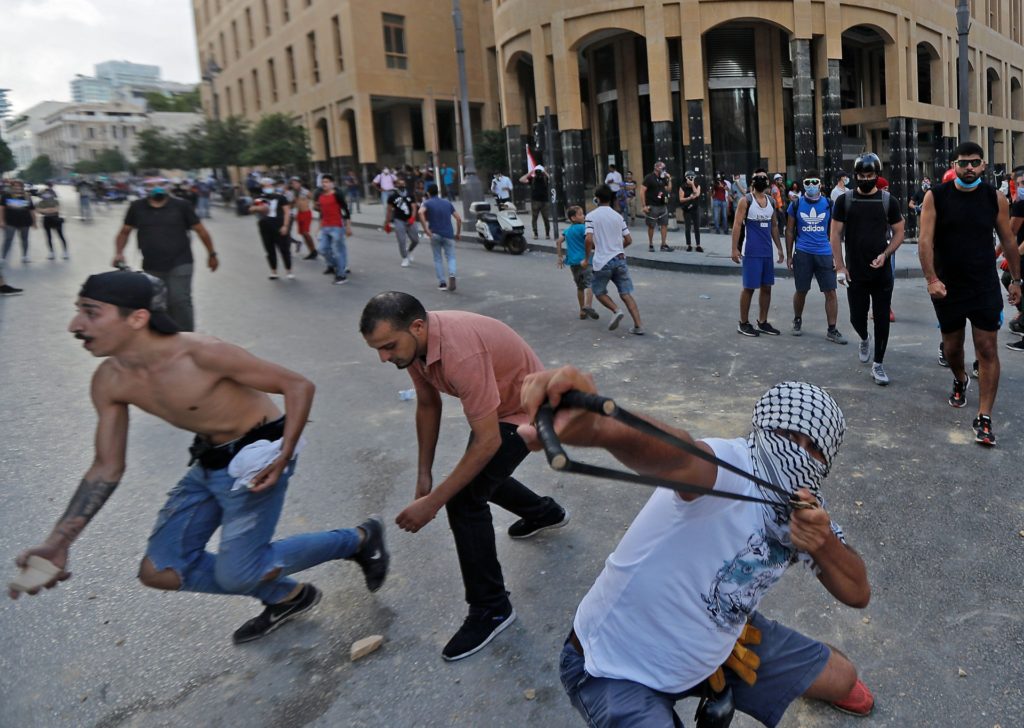 A Lebanese protester uses a slingshot to hurl stones at security forces amid clashes in the vicinity of the parliament in central Beirut on August 10, 2020, following the deadly Beirut port explosion. Lebanese Prime Minister Hassan Diab will announce his government’s resignation imminently over the backlash from the deadly Beirut port explosion. (JOSEPH EID/AFP via Getty Images)

“The government is bankrupt, the currency is almost worthless and millions of Lebanese are jobless. The explosion made things worse by destroying the main port for a nation heavily reliant on food imports. Some 300,000 people made homeless in Beirut have received little help from the government. Lebanon is also home to 1.5 million Syrian refugees,” Al Jazeera wrote.

As always with Lebanon, the cries for accountability become somewhat strangled when the question of exactly who should be held accountable is raised. Many of the weekend protesters pointed angry fingers at the Iran-backed terrorist group and political party Hezbollah, but Hezbollah’s leader Hassan Nasrallah made it clear on Friday he will not allow his organization to be blamed for the explosion, no matter how much of Beirut’s port or Lebanon’s government is under his control.

“If you want to start a battle against the resistance over this incident, you will get no results,” Nasrallah threatened on Friday. “The resistance, with its strength and patriotism, is greater and bigger and stronger than to be hit by those liars who want to push and provoke for civil war. They will fail and they will always fail.”

Nasrallah “absolutely, categorically” denied Hezbollah kept any weapons, bombs, explosives, or “even a bullet or ammonium nitrate” at the Port of Beirut.

“We don’t rule the port, or administrate it, nor do we interfere in it, nor do we know what’s going on there,” he said. “Our responsibility is resistance. We know more about Haifa port than about Beirut port.”

By “resistance,” Nasrallah meant fighting Israel. He has threatened to destroy the Israeli port of Haifa with an ammonium nitrate blast similar to the explosion that devastated Beirut. Soon after Nasrallah’s remarks on Friday, Israeli media published an unsourced intelligence assessment accusing Hezbollah of stockpiling ammonium nitrate at the Port of Beirut for use in bomb-making.

The National on Monday advised European powers to act decisively against Hezbollah and stop allowing it to pretend it has a legitimate “political wing” entirely separate from its terrorist “military” activities.

“The explosion that wrecked the heart of Beirut last week is certain to resonate against Hezbollah in Europe’s halls of power. In part, it is a culminating event that brings together a whole set of charges against the organisation and lays these at its feet.

Indeed, the blast in Beirut calls into question decades of European policies towards its near neighbors,” the National’s London bureau chief Damien McElroy wrote, viewing the impending collapse of the Lebanese government as an unfortunate but optimum moment for Europe to help purge Beirut of Hezbollah’s influence, as well as shutting down the organization’s activities in European cities. 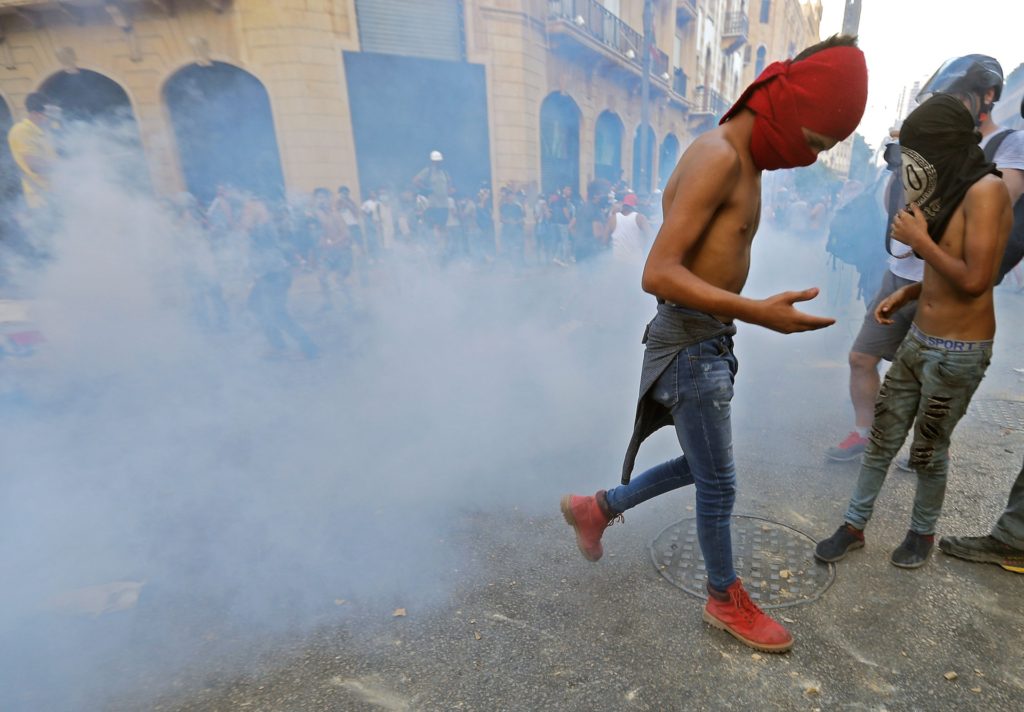 Lebanese protesters move away from tear gas fired by security forces amid clashes in the vicinity of the parliament in central Beirut on August 10, 2020, following the deadly Beirut port explosion. (JOSEPH EID/AFP via Getty Images)