ROME — The United States Embassy to the Holy See accused the Chinese Communist Party (CCP) of the theft of American technology and intellectual property Wednesday during the visit of China’s foreign minister to Rome.

In an unprecedented message via Twitter, the official account of the U.S. Embassy sent out a meme of CCP General Secretary Xi Jinping with a text stating: “The Chinese Communist Party is stealing American technology and intellectual property to build its military and economic power.” 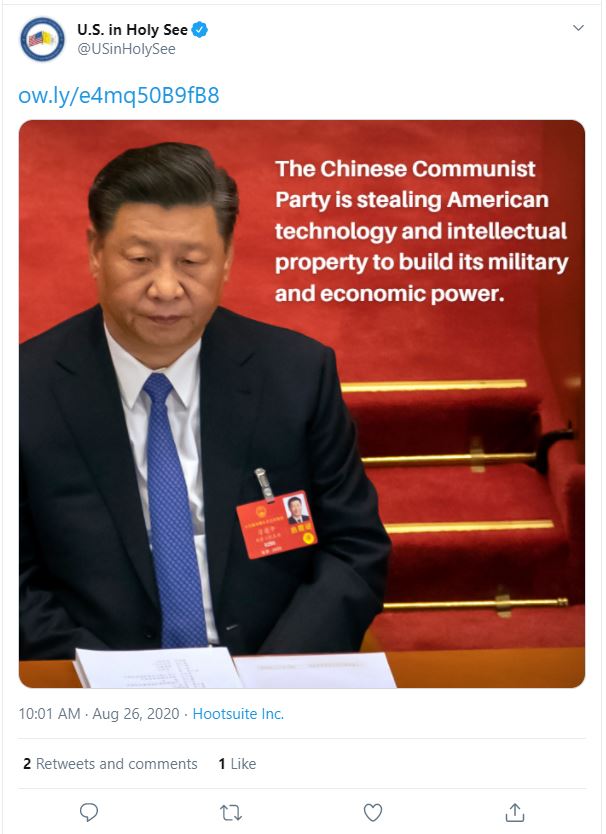 According to Italy’s ANSA news service, the purpose of Wang’s Rome visit is to “court the EU against Trump’s America.”

Wang himself said he is undertaking a tour of the European capitals, beginning with Italy, to strengthen relations between China and the European Union in the face of unspecified “external forces” that threaten “provocation and damage” to these relations.

In a press conference Tuesday, Wang pointed the finger at the “wind of unilateralism and the Cold War” that he feels blowing in the world, a movement that China “does not intend to allow.”

Wang presented the current U.S. administration as lukewarm if not openly hostile towards the EU, while China was “an always reliable friend,” insisting that “a united, stable and prosperous Europe is important for the whole world.”

The Chinese minister also promised assistance to help overcome the coronavirus pandemic and also to cope with the consequences of the economic crisis, a situation felt acutely in Italy.

For his part, Italian foreign minister Luigi di Maio said that Italy intends to play “a bridging role” between the colliding superpowers. While reiterating that the country “will keep faith with its historical alliances,” namely the United States and NATO, Di Maio added that “China is now an unavoidable player on any international scenario” and an important partner for Italy.

Italy, the minister said, “has a clear international position: alliances do not vary and are firmly and stronger than ever,” which permits “a healthy and loyal relationship” based on “frankness.”

Wang’s Rome visit has also sparked debate over the renewal of the controversial China-Vatican deal over the naming of Catholic bishops in China.

The Chinese minister is expected to meet with Holy See representatives during his brief stay in Rome to continue discussions started in Munich last February with Vatican Archbishop Paul Gallagher, his counterpart.

The secret provisional accord between the Holy See and the Chinese Communist Party (CCP), whose details have never been made public, was signed on September 22, 2018 and is due to be renegotiated and renewed next month.

Last June, Vatican Archbishop Claudio Maria Celli, the head of the delegation in relations with the Chinese government, said on Italian television that the accord will likely be renewed this September.

“Dialogue with China is not an easy path but we have embarked on a path made of respect, attention, and mutual understanding to resolve the knots that remain and the situations that leave us more than thoughtful, I would say worried,” said the archbishop.

“I think we will probably have to reconfirm it for another 1-2 years, but still the Holy See has not made a decision on this matter which will then be communicated to the Chinese authorities,” he said. “However, the climate is positive, and there is an atmosphere of respect, clarity, co-responsibility, and foresight.”

“We try to look to the future and try to give the future of our relationships a deep, respectful basis and I would say that we are working in this direction,” he said.

Following his Italian visit, Wang will travel on to Holland, Norway, France, and Germany.