The Chinese Communist Party controls social media, and hence what “netizens” say, so the commentary the Global Times covered does not actually represent Chinese public opinion outside of communist-approved speech.

Some of the puns were based on Biden’s name sounding like “forbidden” in English or baideng, which means “waiting for nothing,” in Chinese. For example, one Chinese social media user said, “If Biden is elected, I can really see China-U.S. relations go smoother, as Beijing is For-Biden City.” The ancient Chinese imperial palace in what is now called Beijing was colloquially known as “The Forbidden City.”

The jokes directed at Trump were decidedly less pleasant in tone:

Yet many onlookers also expressed their pity for Trump, who has been given the nickname as “Trump the nation builder” by Chinese netizens, as they believe he is contributing to China’s rise by accelerating his own country’s decline, with some netizens saying that “baby Trump has brought us so much fun during his four-year presidency.”

One Chinese netizen made a map of the US covered with red, with Trump standing in front of the map, cheering, “wow, check out all the red states.” Another two bystanders were drawn in the picture whispering, “You tell him that’s the COVID-19 map.”

The tight election race also sets a positive example for those hard working people in China. “Thinking about those two old fellas, both in their 70s, still fighting so hard for a job, despite the money they own; can you excuse yourself from working hard?”

The Global Times thought that Trump cartoon was cute enough to reproduce in its article: 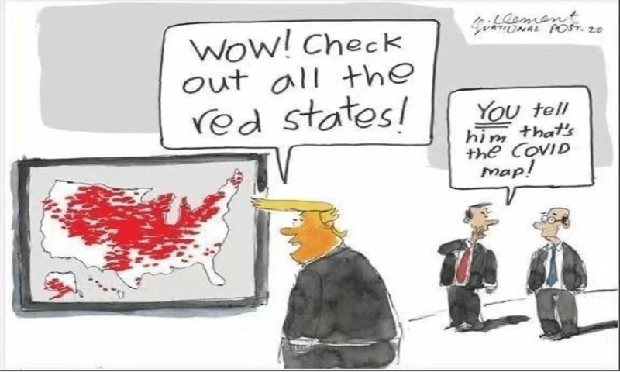 According to the Global Times, Chinese social media users doubt relations with the United States will improve much no matter which candidate prevails, and they expect unrest in the U.S. to continue long after the ultimate outcome of the election is determined.

“After Trump’s four-year presidency, the country won’t be United States anymore, it will be Separated States, no matter who wins,” one Chinese observer predicted.