Greece launched its second nationwide coronavirus lockdown on Saturday. One of the rules is that citizens must text the government for permission to leave their homes, and permission will be granted only for work, physical fitness, and medical needs.

A government spokesman said on Monday that too many people are texting for permission to leave their homes and warned that “abuse” will be met with “strict inspections” and fines.

The Associated Press quoted Greek Prime Minister Kyriakos Mitsotakis explaining he wanted to impose drastic measures before Greece feels the full brunt of the “second wave” rolling across Europe, in part because the Greek health system is not prepared to handle a surge of hospitalizations:

Before the outbreak, Greece had one of the lowest rates of intensive-care beds per capita in Europe. It has since doubled the number to 1,013. But, of the 348 beds dedicated to coronavirus cases, only 128 remain unoccupied.

It’s unlikely that number would’ve been enough to cope with what Mitsotakis said could be 1,000 new hospital admissions over the next 10 days, of which about 150 would likely have required ICU treatment.

On Wednesday, Greece announced a record 18 daily deaths and 2,646 new cases bringing the total confirmed cases to just under 47,000 and deaths to 673 in this country of nearly 11 million. Greece’s rolling average of daily new cases is just over 17 per 100,000 people, as compared to 123 in Belgium and 47 in Italy. But the prime minister warned Greece also had less margin to respond.

“We must stop this wave. I chose once again to take drastic measures sooner rather than later,” Mitsotakis said.

“It could be the case that [less stringent] measures would have worked, but if they didn’t, then in 15 days the pressure that would have been exerted on the health system would be unbearable. That is something that, I will say it again, I can in no way allow,” he added.

Government spokesman Stelios Petsas said on Monday that the extremely tight lockdown is needed to “avert a worse crisis,” “save lives,” and “prevent the health system from becoming oversaturated.”

Petsas said the government would enforce the new lockdown more aggressively than it did in the spring. He expressed frustration at the over one million text messages officials have already received from citizens asking for permission to leave their homes to walk their pets or get some exercise, warning that “such abuse will be met with extended and strict inspections” – even though physical exercise and pet care are two of the reasons Greek citizens were explicitly told they could ask for permission to leave their homes. 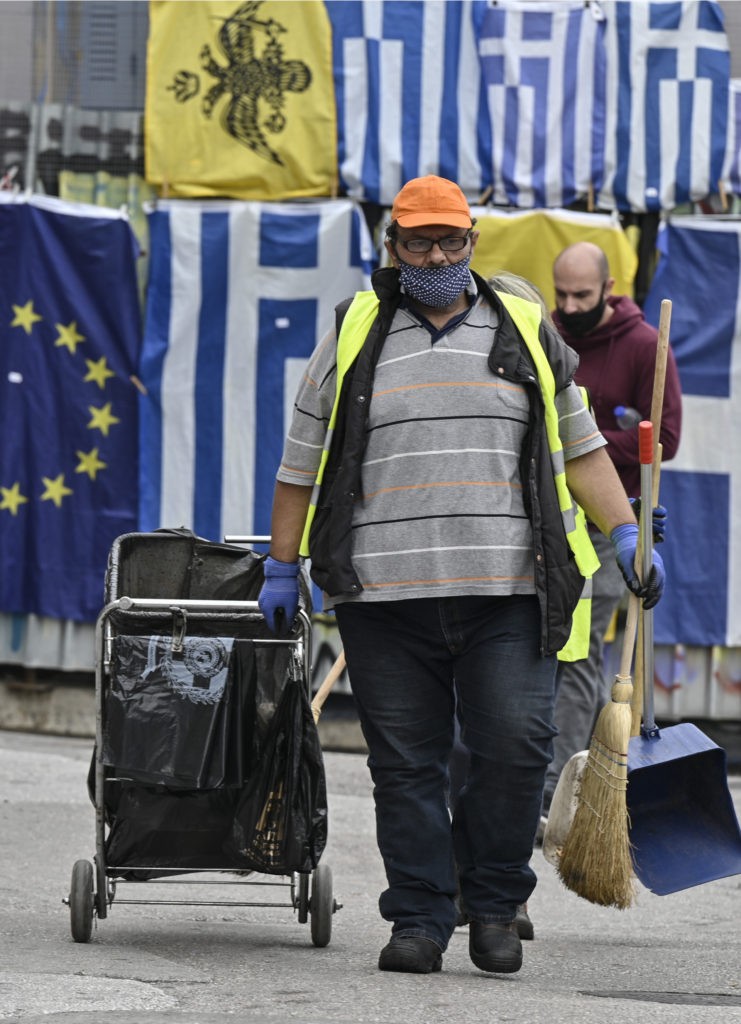 A street cleaner walks past flags in central Athens on November 3, 2020.  The city has imposed a partial lockdown to stem the spread of the coronavirus closing its cafes, bars, restaurants and museums. (LOUISA GOULIAMAKI/AFP via Getty Images)

“Instead of having to pay fines, everyone is urged to abide with instructions so that we exit the lockdown as quickly as possible,” Petsas said menacingly.

Petsas added that locking down for the month of November will hopefully lead to a “more normal Christmas holiday season” after the restrictions are lifted. Mitsotakis made the same point in a teleconference over the weekend.

“It’s in our hands, in the hands of all of us to be able to achieve this. I know that the next three weeks will be tough but I have no doubt that the measures we have taken will be adhered to by our fellow citizens and we will reduce the escalation of the second wave of the pandemic,” the prime minister said.

“Then, in a smart way, we can gradually begin to reopen economic and social activity in December, but having all received the message that this virus is constantly lurking, is a constant danger, we cannot afford to deal with it carelessly,” he said.

The new lockdown will shutter all retail stores except for those selling food and other vital necessities. Restaurants will only be allowed to open for deliveries. Unlike the spring lockdown, this time schools will remain open through the grade-school level, while high schools will employ remote learning procedures. The Greek border will not be closed, but everyone arriving in the country will be required to furnish proof of a recent negative coronavirus test.

Mitsotakis announced that workers suspended from their jobs will be given a stipend of 800 euros (about $950), which is 300 euros more than the stipend furnished by the government during the spring lockdown. Unemployment benefits will also be extended, while tax and loan payment deadlines will be extended.

Finance Minister Christos Staikouras said the new relief measures will cost about $3.9 billion, bringing Greece’s total expenses for the Wuhan coronavirus to over 6 percent of its Gross Domestic Product.

Mitsotakis said in October that it would be “very difficult, almost inconceivable,” for Greece or other European countries to impose more lockdowns.

“We can do localised lockdowns, we use contact tracing in a much smarter way, we do much more testing, but there is still a big question mark: can we manage to live with the virus while maintaining economic normality without a full lockdown and without putting too much strain on our healthcare system? I think no-one has the answer yet, because we still have three or four very difficult months [ahead of us],” he said last month.

Mitsotakis added that his government was “very optimistic” that it would be able to avoid the sort of draconian measures it ended up imposing a few weeks later but said no one could know for certain if such measures would be necessary.

“The government has undermined the magnitude of this crisis,” Syriza legislator Alexis Haritsis charged.