China’s latest boycott threat is directed at streaming giant Netflix for daring to violate the Chinese Communist Party’s (CCP) speech codes by carrying a Thai drama that used a Taiwanese flag in one of its advertising posters.

An alleged groundswell of Chinese “netizens” is demanding Netflix drop the show because the poster threatens to “split up China.”

The show in question is a Thai-language drama called Girl from Nowhere that concerns a mysterious young student who transfers between various girls’ schools, exposing the secrets, misdeeds, and crimes of students and faculty everywhere she goes.

The show hints that the girl might be a supernatural entity, mischievously bringing justice to the wicked, although some of the plotlines are evidently adapted from actual Thai court cases. Two seasons of the show have been produced, and both are currently available on Netflix.

The content of the show does not seem to be an issue in China, although maybe it should be, given the CCP’s hyper-sensitivity about corruption and its dim view of student activists in places like Hong Kong.

The problem, as the CCP’s Global Times explained on Monday, is that the producers of Girl from Nowhere created a promotional poster to thank audiences around the world for giving their show high ratings. The poster said “Thank you” in the language of each country, followed by an image of that country’s flag.

It appears the creators of the poster accidentally switched the Indonesian and U.S. flags, unless “terima kasih” suddenly became a hip way of saying thanks in America last weekend, but “Chinese netizens” scarcely seem to have noticed that slip-up in their boiling rage over the Girl from Nowhere producers daring to list Taiwan and Hong Kong as if they were separate countries and including their flags. 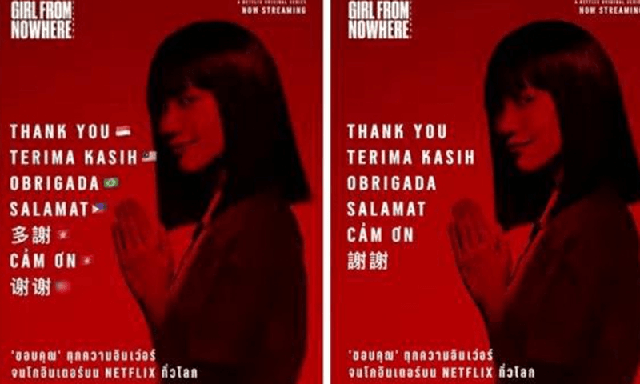 “Girl from Nowhere” poster before and after alterations, from the Global Times

According to the Global Times, the show suddenly lost its high recommendations on Weibo, the Chinese version of banned Twitter, because of this alleged outrage. Even after the poster was modified to remove the flags, the producers were still excoriated for listing Taiwan and Hong Kong separately, which supposedly raises them to the level of independent states and implicitly violates the “One China” principle:

Hong Kong and Taiwan should never be equated to countries, and the text should indicate they belong to China, many netizens pointed out. “The official post splits up China! We should boycott the drama,” one netizen wrote.

After the offending poster went viral, many Chinese vloggers who recommend film and TV works online announced that they have deleted all their videos covering the Netflix drama.

“I learned about the drama from a video clip that introduced it and was very interested in its theme. I have watched its first season and planned to continue watching the second one, but now I give up. The drama crossed the red line,” a Chinese student studying in the US surnamed Li told the Global Times. She said that no one should violate the one-China principle and that the production company should be more careful.

This particular “Chinese netizen backlash” does not seem to have gained as much traction as previous “grassroots” outbursts that happened to line up exactly with the CCP’s political agenda. There has been little coverage of the Girl from Nowhere poster “controversy” outside Chinese state media, and not much indication of what China expects the producers of the show to do, aside from altering or deleting the “offending” thank-you poster. The incident overall seems intended as another reminder that China expects foreign businesses, artists, and media organizations to obey its speech codes.