The Taiwanese government on Thursday delicately objected to the Biden White House deleting a social media post touting America’s donation of coronavirus vaccines to Taiwan, apparently because the message included an image of the Taiwanese flag.

The Chinese Communist government is enraged by written or visual messages that imply Taiwan is an independent country.

The White House “Covid-19 [Chinese coronavirus] Response Team” posted a message on Twitter this week that listed U.S. vaccine donations to countries around the world, including the shipment of 2.5 million doses of Moderna vaccine to Taiwan announced in June, tripling the original American pledge.

As with all of the other recipients of U.S. vaccine donations, the flag of Taiwan appeared in this tweet. 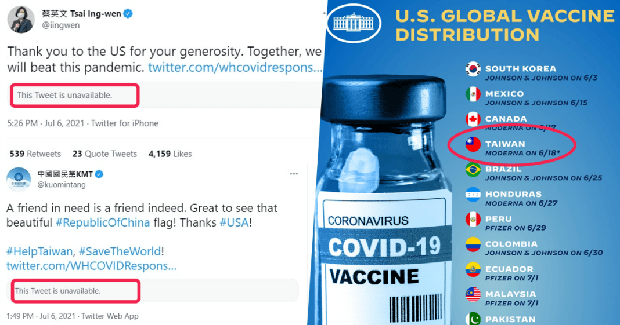 The response from Tsai and the Kuomintang depicted above say the original tweet is “unavailable” because the White House deleted it.

“A spokesman for the White House National Security Council called the use of the flag ‘an honest mistake’ by the team handling graphics and social media that should not be viewed as a shift in U.S. policy towards Taipei, under which Washington does not formally recognize Taiwan’s government,” Reuters reported Thursday.

“The United States remains committed to our one-China policy. Our policy has been clear for decades and has not changed,” the spokesman said.

The Taiwanese Foreign Ministry noted the deletion of the tweet and suggested its primary interest was to avoid causing trouble between Taiwan, the U.S., and China at a time of fraught relations.

“Regarding the reason for the deletion of this tweet, as the media has different interpretations, the Foreign Ministry has asked the representative office in the United States to remind the United States not to cause unnecessary speculation or misunderstanding from all walks of life due to the removal of the related tweet,” Foreign Ministry spokeswoman Joanne Ou said.

Ou said the relationship between Taiwan and the United States has “continuously improved” over recent years and remains strong.

Russia’s RT.com, not the most sympathetic of audiences, interpreted the response as Taiwan chastising the Biden administration for unnecessarily provoking China by carelessly including the Taiwanese flag in an official tweet, although the Foreign Ministry statement specifically mentioned “removal of the related tweet,” not the original message.

The Taiwanese government is having a low-key spat with the Biden administration over the issue of Taiwan’s status, following White House Coordinator for the Indo-Pacific Region Kurt Campbell stating on Tuesday that the administration supports “a strong unofficial relationship with Taiwan,” but does not support “Taiwan independence.”

“We fully recognize and understand the sensitivities involved here. We do believe that Taiwan has a right to live in peace. We want to see its international role, particularly in areas like vaccines and issues associated with the pandemic, they should have a role to play here, they should not be shunned in the international community,” said Campbell.

Campbell’s remarks at a forum hosted by the Asia Society marked the first public comment on Taiwan’s status from the Biden administration, and the first U.S. statement on Taiwan policy since Chinese dictator Xi Jinping’s belligerent address at the Chinese Communist Party’s (CCP) 100th-anniversary celebration.

Xi vowed in that speech to complete the “reunification of the motherland” and “resolutely crush any Taiwan independence plots.”

Joanne Ou, the Taiwanese Foreign Ministry spokeswoman, responded to Campbell’s remarks by thanking the U.S. for its “rock-solid” support but gently insisting her government, the Republic of China, is “a sovereign state and not a part of the People’s Republic of China.”

“This is a fact, and also a reality,” she said.

The opposition Kuomintang party, on the other hand, insisted President Tsai and her governing Democratic Progressive Party (DPP) should take Campbell’s comments as a warning to pull back from independence and appreciate the limits of Washington’s protection.