Two men in Tunisia set themselves on fire over the past few days to protest living conditions in their country, reprising the event that set the “Arab Spring” uprisings of 2011 in motion.

The Arab Spring began when a 27-year-old street vendor named Mohammed Bouazizi set himself on fire outside the local governor’s office, enraged by the confiscation of his merchandise and callous treatment by regulatory officials. Bouazizi died of his injuries after two weeks in the hospital, galvanizing a popular uprising that eventually drove dictator President Zine al-Abidine Ben Ali from the country after two decades in power.

Tunisia is once again ruled by a dictator, President Kais Saied. Saied won office in 2019 as an outsider crusading against corruption and promising dramatic reforms. In August 2021, he suspended the Tunisian parliament and seized absolute power, supposedly a temporary move while he imposes the most challenging reform policies.

On Saturday, Saied announced he was preparing to amend or nullify the national constitution, although he promised in a live television address that his proposed “amendments” would be enacted through the proper legal “framework.” 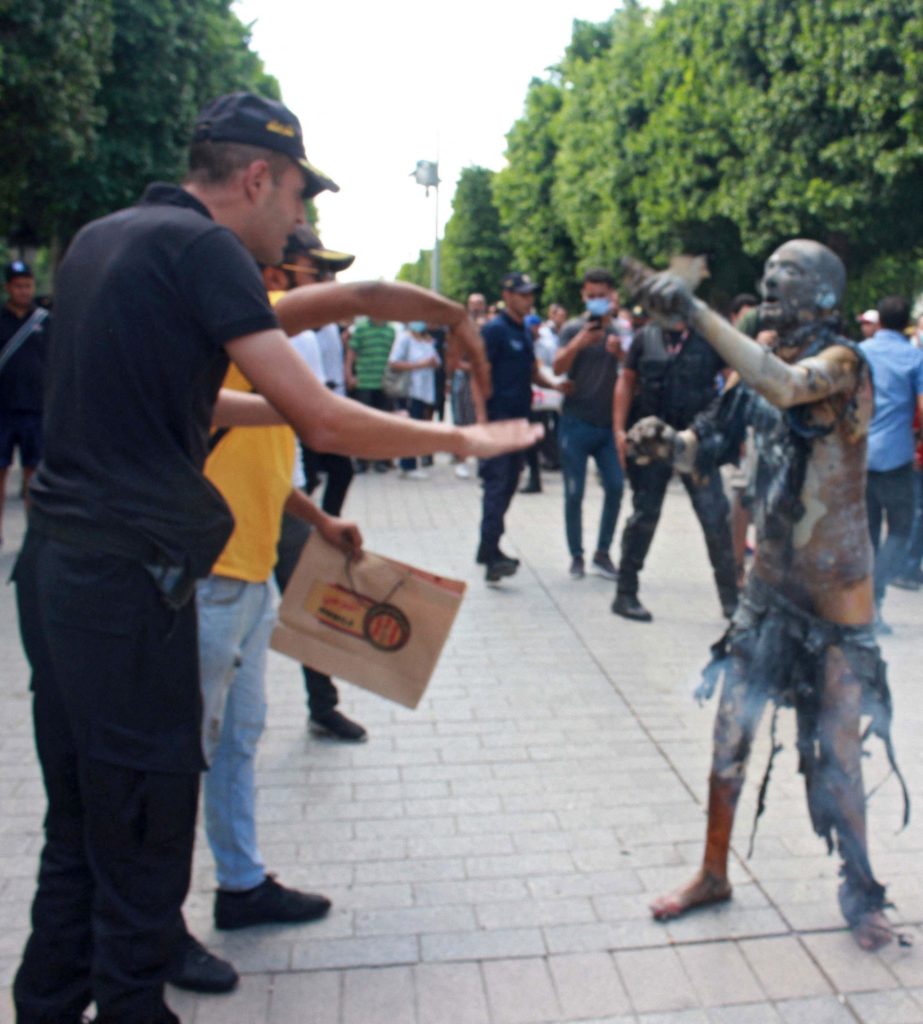 EDITORS NOTE: Graphic content / A man, who set himself on fire, is helped by passersby and Tunisian police officers in the Habib Bourguiba avenue in the capital Tunis on September 11, 2021, before being taken to hospital for treatment. (Photo by SOFIENE HAMDAOUI/AFP via Getty Images)

Saied’s advisors suggested he plans to impose a new constitution through a national referendum, overruling objections from Tunisia’s political parties. Among other obstacles, Tunisian constitutional law states that amendments can only be put to a referendum after securing approval by two-thirds of parliament, and Tunisia does not have a parliament at the moment.

Last week, a 26-year-old man named Neji Hefiane set himself on fire in front of his family and died in the hospital. The Hefiane family said he suffered gunshot wounds to the head during the early days of the Arab Spring uprising but never received the government aid he was promised, even after his father appealed directly to President Saied.

“It was the injustice and marginalization he suffered that pushed my son to kill himself,” his father said.

“My brother didn’t get anything he was entitled to, neither free healthcare nor a guaranteed job. He asked everywhere but was only met with neglect, including from the president,” Neji’s sister added.

A second man, age 35 but as yet unnamed by Tunisian officials, set himself ablaze on Saturday on a street corner in the heart of Tunis, the national capital. He reportedly tried to get the attention of journalists before dousing himself in flammable liquid and setting himself on fire.

Lawyer Lamia Farhani told AFP that a disturbing number of Tunisians who were injured during the 2011 uprising are “threatening to kill themselves.”

“There is no political will to guarantee [their] basic rights,” said Farhani, who runs a foundation to benefit the “martyrs and wounded” from the Arab Spring.

“The state and all the governments that have come and gone since 2011 are responsible for the state of despair and disgust among these people,” she said.