Ukrainian President Volodymyr Zelensky on Wednesday vowed the “response will be strong” to an apparent assassination attempt against his top aide, Serhiy Shefir. Zelensky worked his furious response to the attack on Shefir into his fiery address to the U.N. General Assembly in New York on Wednesday afternoon.

Shefir, 57, is a longtime friend of Zelensky and scriptwriter for his comedy television show before Zelensky went into politics. He has served as a senior adviser to the president since Zelensky was elected in 2019.

Shefir had just left his home in the village of Lisnyky, south of Kiev, when gunmen opened fire on his sedan. Shefir’s driver was rushed to the hospital with serious injuries, but Shefir was not wounded.

“Unidentified individuals fired about 10 shots from a 7.62 calibre automatic weapon,” Ukrainian Prosecutor General Iryna Venediktova said on Wednesday. She said the incident was under investigation as two cases of attempted murder against Shefir and his driver.

“Such ammunition is not made in Ukraine. They are produced in Hungary. We are trying to find out the possible timeline when they were brought into Ukraine and potential suppliers. We do not rule out the possibility that he was smuggled into Ukraine,” Yenin said.

Shefir, who was moved to a secure location after the attack, said the attempt on his life was meant to “intimidate” Zelensky and predicted it would fail.

“One has to understand that our president is very strong-willed, he has a spine and cannot be intimidated,” he said.

Shefir said his driver acted “heroically” by hitting the gas to escape from the unidentified gunmen.

The BBC suggested the attack might have been prompted by an anti-corruption bill Zelensky has introduced, targeting the super-rich “oligarchs” who dominate Ukrainian politics and economics. The Ukrainian parliament is scheduled to begin debating the bill within the next few days.

Several of those oligarchs have close ties to Russia, notably including Viktor Medvedchuk, a close friend of Russian President Vladimir Putin who was charged with treason in May and placed under house arrest. Many international observers cautioned that Medvedchuks’ arrest would provoke a possibly dangerous response from Putin.

Kremlin spokesman Dmitry Peskov on Wednesday dismissed allegations of Russian involvement in the attack as “the signs of an excessively excited emotional state.”

“Unfortunately nowadays, whatever happens in Ukraine, none of the current politicians is able to rule out the Russian trace,” Peskov said condescendingly.

“I am quite calm about any intimidation, but it seems to me that this is a transition to another level of relations between certain groups and the authorities. I believe that we will definitely respond, solely at the level of legislation, absolutely fairly and defend the interests of Ukrainian citizens, who gave us these rights to change the state,” Zelensky told reporters at the United Nations on Wednesday.

Zelensky said the attack was a targeted assassination, contending the assailants knew exactly which route Shefir would take after leaving his home. He regretted not being able to return to his friend’s side immediately after such a frightening ordeal.

“If I did not have that status and that trust, if I was not the President of Ukraine, my priority would be to stay close to my friend. But we understand that first of all I am the President, and then a father, husband and son, and then a friend. Life has set such priorities. As President, I must first represent the state,” he said. 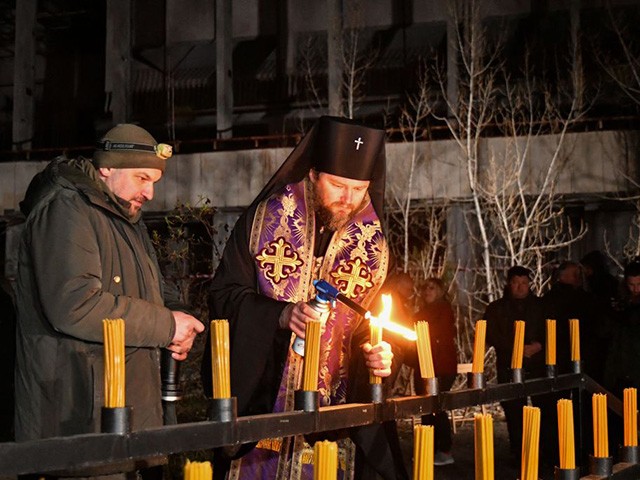 An orthodox priest lights candles on the central square of the ghost town of Pripyat near the Chernobyl Nuclear Power Plant early on April 26, 2021, to commemorate the 35th anniversary of the Chernobyl nuclear disaster. (GENYA SAVILOV/AFP via Getty Images)

“It’s a weakness to send me a ‘greeting’ by opening fire on from the forest on my friend’s car. But the response will be strong,” Zelensky vowed.

The Ukrainian president worked the attack into his fiery address to the U.N. General Assembly on Wednesday, describing the attempted assassination as a “wake-up” call to a somnolent world community.

Zelensky noted he himself was wide awake. “About last night, I will tell in more detail. 3:00 a.m., dozens of calls. There was an attempt on the life of the first aide to the President of Ukraine. 12 shots. Three of them hit the driver.”

“Is it time to wake up? Honestly – Ukraine did not fall asleep. It is difficult to do so due to the sounds of explosions, the sounds of shots being heard in our occupied Donbas for the eighth year in a row,” he said.

Zelensky was harsh on the U.N. in his speech, chiding it for spending too much time chattering about fashionable elitist issues like climate change when free people like the Ukrainians are under imminent threat from corrupt and authoritarian forces.

For that matter, he pointed out that Russia’s annexation of Crimea was an environmental disaster: “They made a military base out of unique nature. Instead of fauna and flora, there is a fleet and soldiers. And in the souls of the Crimean people, there is a problem opposite to the world – not global warming, but global devastation.”

“We did not promise to overcome climate change. We promised to intensify our cooperation to overcome climate change. How much time, paper, energy have we spent on these ‘we are determined.’ ‘we have confirmed a common interest in overcoming,’ ‘we have agreed to significantly strengthen cooperation’ [statements]? We want to revive the U.N.? Let’s talk to each other simply, let’s speak clearly, concretely, and most importantly – honestly, frankly,” he said.

Zelensky ruefully noted that his country acted quickly to evacuate people from Afghanistan after the Taliban takeover – both “citizens of Ukraine as well as citizens of many other countries” – and acted quickly to help with the coronavirus pandemic by sending doctors and other “necessary assets” to Italy at the height of its outbreak, but now the world community does not seem inclined to help Ukraine in its hour of peril.

“Today the U.N. is like a retired superhero who has forgotten what he could do. He considers himself a burden, a weak, frail, useless old man, whose life was in vain,” he said evocatively.