Fresh from beating the stuffing out of China’s high-tech billionaires to teach them who’s boss, dictator Xi Jinping is launching a regulatory crackdown on his banking industry to purge it of capitalist influences and tighten the Chinese Communist Party’s (CCP) grip on every coin.

The Wall Street Journal (WSJ) on Monday compared Xi’s assault on China’s banking sector to his crackdown on Big Tech, which began – at least in the public eye – when Alibaba founder Jack Ma dared to criticize Communist economic policy in October 2020.

Ma disappeared for a while, and when he resurfaced he was less outspoken, less celebrated, and considerably less rich. Soon afterward, Alibaba was cut down to size with gigantic “antitrust” fines, and other Chinese tech companies received similar treatment. 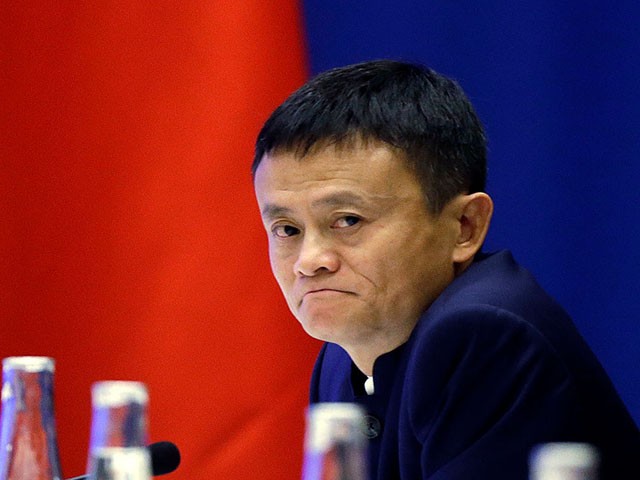 The WSJ reported on Monday that a “sweeping round of inspections” is now headed toward China’s financial institutions:

According to people with knowledge of the plan, the inspections, announced in September with few details, focus on whether state-owned banks, investment funds and financial regulators have become too chummy with private firms, especially some that have recently landed in Beijing’s crosshairs, such as property giant China Evergrande Group, ride-hailing company Didi Global Inc. and financial-technology firm Ant Group.

The examination, which is led by China’s top anticorruption agency and centers on 25 financial institutions at the heart of the Chinese economy, is the most extensive of a sector Mr. Xi has been suspicious of since coming to power nearly a decade ago. It is part of his broad effort to steer China’s economic system away from Western-style capitalism in the run-up to a leadership transition late next year, when Mr. Xi is expected to sidestep convention and continue his rule beyond the usual two five-year terms.

The plan for China’s banks looks very similar to the scheme for bringing those high-flying tech billionaires to heel:

Starting this month, graft-busters from the Central Commission for Discipline Inspection are fanning out through the offices of the 25 state institutions, reviewing files of their lending, investment and regulatory records and demanding answers to how certain deals or decisions related to the private firms were made, according to the people familiar with the plan.

The WSJ quoted Xi’s top anti-corruption official, Zhao Leji, explicitly stating that he would “thoroughly search for any political deviations” at those 25 financial institutions.

Xi’s Vice President Wang Qishan could end up filling the role of Jack Ma in the financial crackdown. His political star is fading, the “aggressive lending” he championed is beginning to look like a string of risky bets, his banker friends are going bankrupt, and Xi may soon need a fall guy for the collapse of China’s debt-fueled construction sector. 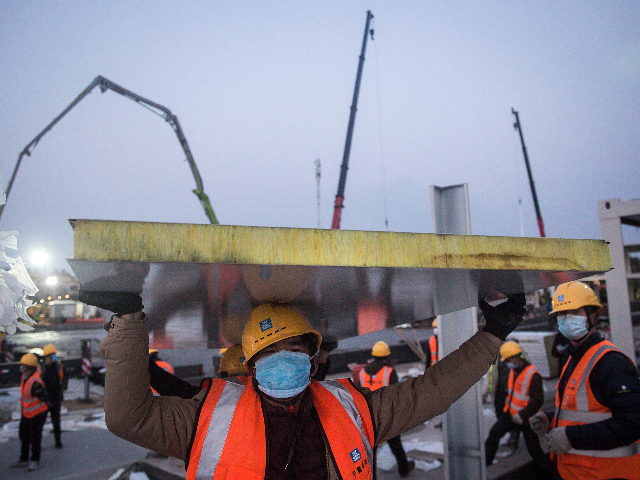 A worker carrying construction material at Huoshenshan hospital as new hospitals are built to tackle the coronavirus on January 28, 2020, in Wuhan, China. (Getty Images)

For that matter, Ma himself could make a guest-starring appearance in the CCP’s new regulatory drama, since the huge China Investment Corporation (CIC) at the center of the banking crackdown was an investor in Ma’s financial services company, the Ant Group.

The Ant Group is still strapped to Xi’s regulatory surgical table. Bloomberg News noted last week that Ant has already been “ordered to undergo a transformation into a financial holding company that will entail much closer scrutiny, akin to banks,” and to separate its consumer lending operations from other parts of the company. Western analysts speculate Ant will soon be ordered to divest its Alipay transaction service and its loan business.

The WSJ noted Xi has a history of treating big-money bungles as deliberate attempts to overthrow his rule by destabilizing the economy in a “financial coup.” Bloomberg observed that some of Xi’s regulatory measures against both tech and financial firms are geared toward giving the CCP more direct control over the “vast amounts of information” they collect about consumers.

The CCP’s war against cryptocurrency is clearly related to its regulatory crackdowns on both tanks and tech companies. The Ant Group and similar payment services companies were ordered over the summer to stop providing crypto services. Some smaller financial companies have been shut down for dealing in crypto. Much of this antipathy for Bitcoin and its competitors could be China clearing the field to roll out its own state-sanctioned digital currency. 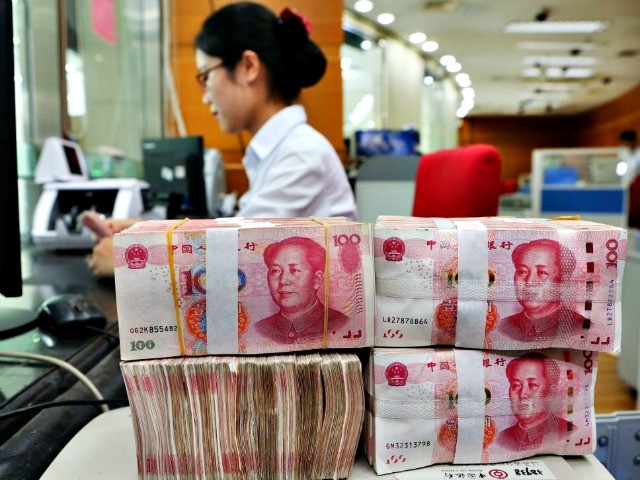 An employee counts 100-yuan notes at a bank in Nantong in China’s eastern Jiangsu province on July 23, 2018. (AFP/Getty Images)

The problem facing Xi is that China’s economy has become hugely dependent on aggressive lending policies, and so has its foreign policy – the imperialistic Belt and Road Initiative (BRI) is fueled by titanic loans to emerging nations, some of which had trouble qualifying for loans from prudent Western institutions. Many of China’s BRI “partners” are lately beginning to question the terms of the deals signed by preceding administrations.