“Zhao Hui, a deputy director of public security bureau of Jalai Nur district, Manzhouli, was removed from office on Sunday [December 5] for delaying the transfer and quarantine of more than 100 close contacts of an infected individual on Saturday [December 4],” according to the state-run newspaper.

“So was a vice chairman of Manzhouli Labor Union Su Weidong, who poorly discharged his duty at quarantine hotels on Friday [sic],” the Global Times reported.

Three other Manzhouli city officials “were deposed on Monday [December 6] — a member of the Standing Committee of CPC [Chinese Communist Party] Jalai Nur District Committee, director of public security bureau of Jalai Nur, and a deputy district head in charge of the local health commission,” the publication revealed. 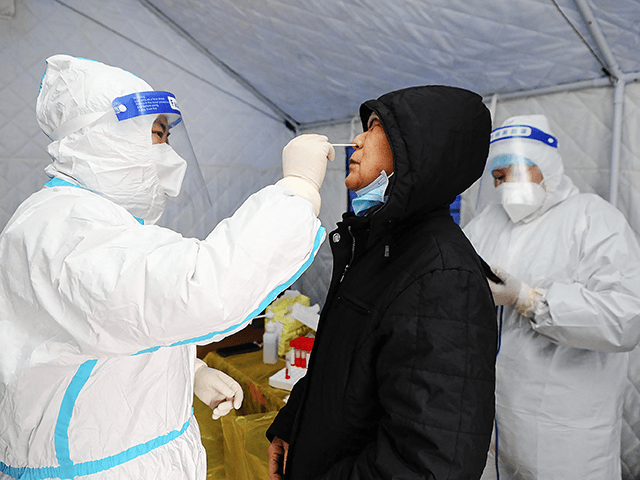 This photo taken on November 29, 2021 shows a resident undergoing a nucleic acid test for the Covid-19 coronavirus in Manzhouli in China’s northern Inner Mongolia region. (STR/CNS/AFP via Getty)

In addition to the dismissals, local Communist Party authorities in Manzhouli also issued “warnings” and “criticisms” to four municipal leaders in the city’s Jalai Nur district on December 5 for an alleged “lack of responsibility in promoting nucleic acid tests, transferring people under quarantine or managing lockdown residential areas.”

Manzhouli’s Jalai Nur district has served as the epicenter of the latest coronavirus outbreak in China’s Inner Mongolia Autonomous Region. Manzhouli is a China-Russia border town that facilitates more than 65 percent of trade between the two neighbors. The land port has a population of nearly 250,000. 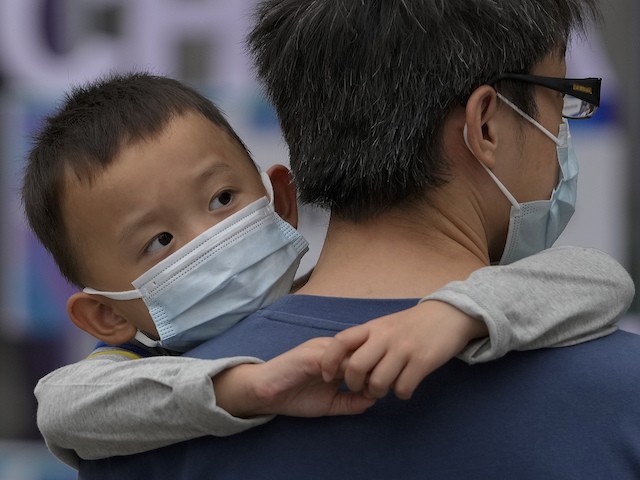 A man carries a child, both wearing face masks to help curb the spread of the coronavirus, walk on a street in Beijing, September 12, 2021. (AP Photo/Andy Wong)

Manzhouli trade and transport officials said they aimed to “strengthen prevention and control” of the city’s coronavirus outbreak at ports and “effectively block the spread of overseas epidemics through imported goods,” according to an official notice.

Manzhouli’s coronavirus epidemic is linked to a nationwide coronavirus outbreak across China that first emerged in mid-October as the result of a tour group from Shanghai visiting various attractions during the holiday to celebrate the founding of the Chinese Communist Party. The Party has offered no evidence suggesting that the coronavirus cases came from abroad.

State-run Chinese media outlets have promoted an unfounded theory that the epidemic was “imported” to China through a China-Mongolia border town called Ejin Banner. The official narrative claims a Chinese tour group originating in Shanghai traveled to China’s Inner Mongolia Autonomous Region in early October. Some tour members visited Ejin Banner and allegedly contracted coronavirus from an unspecified foreign source, then spread the disease across China in subsequent weeks.

State propaganda outlets, including the Global Times, continue to promote the “imported outbreak” theory without providing evidence for their allegations.