For the past four years, the highest profile Big Labor Boss was Service Employees International Union (SEIU) President Andy Stern. Stern has deliberately parlayed his controlling style as that of a New Labor Boss, and he has painstakingly worked on the SEIU “purple brand.” And yet, Stern and the SEIU union have failed to live up to the New Labor Boss identity that he claimed in his New York Times Magazine and CNN/Fortune Magazine articles. 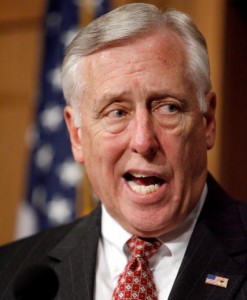 Stern tried to separate himself from the herd of “old-styled” labor bosses in several ways, most noticeably with his dress. He conscientiously wore his beloved SEIU purple with its slight pinkish hue. Apparently, Stern is trying to replicate for his union what brown does for UPS.

Stern’s limitless purple attire led some to refer to him as the Lavender Labor Leader. And recently, SEIU’s Anna Burger looked very chic in her purple suit as Congressman Patrick McHenry (R-NC) grilled her about SEIU’s relationship with ACORN.

Whatever color of scarves, suits, or hats Andy Stern decides to wear, you cannot deny his influence with the White House, U.S. Congressional King Pins, the Democrat National Committee, and ACORN among others. But, has Stern’s smash-mouth organizing and relationship to ACORN begun to turn SEIU’s purple into black and blue? You bet it has!

Clearly, ACORN’s partnerships with SEIU and other Big Labor outfits has begun to drag down SEIU’s image. SEIU has decided, now that ACORN is damaged goods, to cut ties for now. But, that will be very difficult because ACORN and ACORN’s training programs are totally interwoven into the purple fabric that makes up SEIU.

From 2005 through 2008, SEIU spent $9 million on ACORN training programs and contracting out ACORN organizing services. SEIU even hired ACORN founder Wade Rathke to command SEIU national organizing programs. The ACORN listings below illustrate that the SEIU-ACORN relationship is much deeper than SEIU may want publicly known:

ACORN is not the only Brand Destroyer for SEIU

But, SEIU cannot blame its deteriorating image solely on it incestuous relationship with ACORN. The “New Labor Boss” Stern has failed to live up to the image he created.

New Boss Stern is the same as Old Big Labor Bosses that Robert F. Kennedy described in his book, “The Enemy Within.” Those Old Bosses would consolidate power and control over local unions by placing and threatening to place locals into trusteeships (Taking over operations of a local union and ousting of the elected union officials). In addition, these bosses would cut deals with employers that allowed union members to be paid below contract rates.

Local SEIU officers have claimed that Stern aggressively eliminates local autonomy via trusteeships and approved payoffs (e.g.An indictment alleged that in exchange for payments, SEIU local president Danny Iverson’s resigned so that Stern associate Debra Timko would became president.); and, at least one SEIU contract allows an SEIU contracted employer to pay below contract rates (of course, workers are still forced to pay SEIU union dues and fees for its representation):

“In any instance where the Company signatory hereto desires to submit a bid to perform unit work at a building being serviced by a contractor not a party to a collective bargaining agreement with the union which would cover the work in question, it is agreed that the wage and fringe benefit provisions of this Agreement may be waived …”

Stern’s internal self-serving tactics have resulted in minimal public image damage because most of these actions primarily involve SEIU internal politics. However, internal struggles combined with SEIU’s ruthless corporate campaigns and associations with groups like ACORN are causing even mainstream columnists like Kathleen Parker to question why anyone would want to be associated with SEIU. She wrote:

While everyone in Washington is suddenly pretending they’ve hardly ever heard of ACORN, they might want to pretend they’ve never heard of the SEIU, one of the nation’s largest unions.

During these corporate campaigns, SEIU coordinates personal attacks against employees, customers of targeted employers, and the employers. SEIU organizers systematically increase their attacks with assistance from outside pressure groups in accordance with SEIU’s corporate campaign stratagem.

SEIU, along with its partners ACORN, Justice for Janitors, Interfaith Worker Justice, and others stage disruptive demonstrations, place derogatory ads, hand out offensive flyers, send defamatory letters, and pressure politicians. SEIU organizers have even used children to hand out nasty flyers as they trick-or-treat. All of these actions are designed to irritate everyone in the community and hopefully focus the unrest on the employer, not SEIU. And, in the end, it’s all about money – union dues extracted from workers for the privilege of having a job.

All of SEIU’s in-your-face activities in numerous communities across the country has dramatically begun to weaken SEIU’s own brand.

To borrow a phrase from ACORN’s Wade Rathke, no matter how you shake and bake it, a nationwide campaign that embraces confrontation and irresponsible personal attacks will eventually stick to the SEIU brand. Constantly filing unsubstantiated accusations with enforcement agencies and then using these SEIU-generated unsubstantiated claims to force politicians to act eventually hurts the credibility of the accuser.

Remember the childhood story of the boy who cried wolf?

In the end, SEIU’s smash-mouth, no-holds-barred organizing, internal power struggles, and associations with the likes of ACORN have irrefutably begun to bring down Stern’s SEIU purple brand.