Yesterday we discussed the events leading up to the August 6th health care town hall meeting featuring Rep. Russ Carnahan (D-MO). The event was hosted by Health Care For American Now (HCAN) and Organizing for America (OFA), the former a front group for Service Employees International Union (SEIU) and the latter an off-shoot of the Obama Campaign now run by the Democratic National Committee (DNC). We revealed a four page document released by HCAN two days before the August 6th town hall meeting. In that document, guidelines are revealed for members of HCAN (union members) on how best to stifle the protestations of ObamaCare. 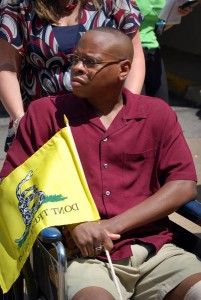 The meetings hosted by HCAN (like the one on August 6th in St. Louis) were set up using these rules. Americans showed up at these meetings thinking that it would be an opportunity to address their elected representatives and talk to them about the single most important piece of legislation our congress has proposed in decades. Instead, they were pushed to the back of the room and shouted down by the well-trained SEIU members. Eventually, an American citizen who was distributing “Don’t Tread on Me” flags and buttons was assaulted by a handful of the SEIU members. His name is Kenneth Gladney.

Let’s look at that memo and how it matches the events of August 6th:

According to Harris Himes an eyewitness at the scene of the town hall meeting the evening of the 6th:

They let in about two hundred of us but had about 120 seats set aside, marked “RSVP,” and these were for Carnahan supporters. These people were let in by a side door for the “handicapped.” Many had purple t-shirts with “Organizing for America” in white letters on the back and large “SEIU,” smaller “Service Employees International Union” on the front. They shut the doors on about 1000 people around 6:30 pm for the 7:00 pm event. After being introduced, Carnahan spoke but was booed frequently while the supporters stood and applauded…. Finally, Carnahan stood for questions. It turned out that the questions had to be written and turned in. The dissenters booed, shouting that they didn’t know this and hadn’t been given a chance to write any. It didn’t make any difference, because he answered a couple of seminar questions and then announced that he had to leave about 8:30 for an “interview”–after most of the time had been taken up by the panel.

Also on the evening of the 6th, a town hall meeting organized by HCAN and OFA was set up in Tampa Bay, FL with Rep. Kathy Castor. An eyewitness describes what is seen on this YouTube video:

This is part one of the Tampa Town Hall meeting on August 6. Left Wing organizers are seen passing out Obama Flyers and signs. Once they see that right wingers have their own sings, they quickly pick them up and hide them. Hundreds of people are outside trying to get in, many of them who had been waiting for hours while others were able to sneak in the back door. Even with all this, there was still many in the audience that booed once Kathy Castor started detailing the Health Care Plan.

And here is a second description on a YouTube video that shows the “marshals” and security forces in action:

Kathy Castor’s union thugs beat up a guy (in the green shirt – evidence 3:21) and shut the doors to prevent the opposing opinions from being heard. She then proceeded leave, not taking any questions, because “she couldn’t hear.

The Tampa Bay meeting and the St. Louis meetings followed the same templates and they were both arranged by HCAN and OFA. Both ended with pushing and shoving (in both cases the pushing being done by card-carrying members of SEIU) and both ended with the elected official leaving after only answering a few scripted questions put forth by plants in the crowd.

It is hard to not reach the conclusion that the events of August 6th were a result that could have been expected given the rhetoric from elected officials in the Democratic Party (Speaker Pelosi saying the protesters carries swastikas) and the President’s Advisers (Jim Messina telling Senators “if they hit you, we will punch them back twice as hard”) coupled with the instructions handed down to obedient union members by their union leaders. If you agree that HCAN and OFA were instrumental in creating the climate for violent confrontation that led to Kenneth Gladney’s assault, then it is important to learn about the leadership of HCAN and the SEIU members who are suspects in the assault and learn who they are and what might have motivated their actions.

Meet Margarida Jorge. She works for HCAN and is the person who released the memo that served as a template for the meetings in Tampa Bay and St. Louis. Ms. Jorge worked for SEIU in Missouri prior to her position at HCAN. She is often featured at the People’s World web page (a direct descendant of the Daily Worker the newspaper of the American Socialist and Marxist Movement). In fact, Ms. Jorge was honored with an award from People’s World for her work with an organization called Progressive Vote, or Pro-Vote. Pro-Vote is a coalition of many organizations including SEIU, HCAN and ACORN. Their mission: To fight for progressive issues and progressive candidates.

That is Margarida Jorge. She wrote the HCAN memo. In the past she worked with Sara Howard.

Meet Sara Howard. She used to work with SEIU. She also worked for a group called America Coming Together (ACT). In the 2004 campaign, ACT was very active in registering voters on behalf of the Kerry Campaign. ACT was later fined $775,000 for taking illegal donations (including those from SEIU), the largest FEC fine in history. She also worked as a Senior Strategist for Obama for America. On August 5th, the day before the St. Louis town hall meeting featuring Rep. Russ Carnahan, Sara Howard was named the Communications Director for the Missouri Democrat.

That is Sara Howard. She is Russ Carnahan’s Communication’s Director. When she was working on the Obama Campaign, she was under the direction of Buffy Wicks.

Meet Buffy Wicks. Buffy Wicks is the Deputy Director of the White House Office of Public Engagement directly under Valerie Jarrett. She was the White House representative on the infamous conference calls involving Yosi Sergant and the NEA which were exposed by Big Hollywood resulting in Mr. Sergant’s forced resignation. Before her job at the White House Buffy Wicks ran the Obama Campaign operation in Missouri where she was instrumental in get out the vote programs involving SEIU, ACORN and Pro-Vote, where she worked with Sara Howard and Margarida Jorge.

That is Buffy Wicks, Sara Howard and Margarida Jorge. In their capacities with SEIU and Pro-Vote and HCAN and the Obama Campaigns, they were involved with SEIU Public Service Director and former organizer Elston McCowan and SEIU Business Agent and Organizer Perry Molens. McCowan and Molens are the men charged with the assault on Kenneth Gladney.

Let me just lay this out once more:

Does your head hurt yet? If it doesn’t, it will tomorrow.

Tomorrow we will show how this small network of insiders in the leftist political power structure of St. Louis are inter-connected with the very people charged with investigating and prosecuting the individuals responsible for beating Kenneth Gladney. And, how those same people were also instrumental in the Obama Campaign in Missouri in 2008. We will show how the three month delay in bringing charges against the assailants appear to be motivated by political and personal relationships in the close-knit family that is the St. Louis Democratic Party.