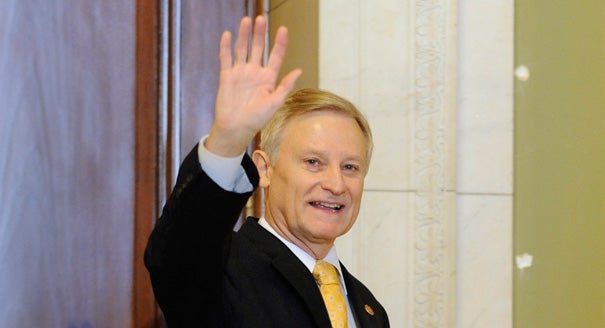 Is Bachus Waiving Goodbye or Hello?

Beating back corruption is hard work. Look no further than Rep. Spencer Bachus (R-AL), who is  under investigation by the Office of Congressional Ethics about a series of stock trades he made during the 2008 financial crisis. No fellow Republican will defend his questionable ethics and though he survived a challenge by Ed Royce of California to his chairmanship of the House Financial Services Committee, he is marginalized within the GOP and may soon face the wrath of the Securities and Exchange Commission for his timely trades.

Only his past arch-nemesis, Rep. Barney Frank, the architect of Fannie Mae and Freddie Mac and much of the subprime crisis, will defend him and who needs friends like that? Though it is worth stressing that the Bachus investigation is still at the level of OCE and therefore doesn’t carry the punishment or the stigma that a House Ethics Committee investigation does, Bachus is in a world of hurt.

Fortunately for him, he may well survive a primary challenge next month on March 13. Here’s why: he has a lot of money (a $1 million+ war chest) and his opponents haven’t gotten the message out about his shenanigans because they just joined the race in January.  Time is running out for those seeking to unseat him. If Bauchus wins the primary,  he will win the general election in the very Republican congressional district. A survey conducted by the Campaign for Primary Accountability, an anti-incumbent super PAC, has Bachus leading his closest competitor, 63% to 17%.

Still, those who were hoping to send the 20-year congressman packing might have grounds for optimism. That same survey, though, found that when the callers highlighted Bachus’s connections to Wall Street, his support dropped below 50%, to 44%, making him vulnerable to a primary challenge. (The news had not yet broken about the investigation into his stock picking.)

Bachus’s likely replacement, GOP state Senator Scott Beason, author of Alabama’s immigration law, has had a tough time raising money, in part because of racism smears levied against him. While wearing a wire and helping the FBI to unravel a pay-to-play scheme in state politics, Beason referred to black casino goers as “aborigines,” according to the local paper. Beason has apologized in September of last year, but already the left-wing is predictably hyperventilating. Sen. Vivian Davis Figures, D-Mobile, who is black, is calling on him to resign, but three black Democrats have come to his aid and defended him against the slur.

Beason’s only hope is that the super Pac that commissioned the survey might come to his aid by educating the voters of Alabama’s sixth congressional district as to their congressman’s financial dealings. Voters will have to decide if Beason’s courage in unraveling a corruption scheme with colorful language trumps Bachus’s alleged corruption. Can Beason Send Bachus Back From D.C. After 20 Years With A Little Help?