At that time–just eight years ago–Congressman Danny Davis was continuing his efforts to help move then-State Senator Obama up the Chicago political food chain. And not that long ago–in fact, just two weeks–that Congressman Davis was honored by People’s World, a news website, at the Communist Party U.S.A.’s headquarters in Chicago for a lifetime of “inspiring leadership.”

Upon receiving the People’s World “Chris Hani & Rudy Lozano Social Justice Award,” Davis reflected, “Rudy Lozano and I worked closely together to try and build and a relationship between Latino and African-American activists and union types… we called ourselves ‘Progressives.'”

Congressman Davis, a member of the House Committee on Homeland Security, was filmed receiving his award and exiting the Communist Party U.S.A. headquarters in Chicago on March 4, 2012. When questioned about his relationship with the Communist Party, Davis abruptly fled the scene, refusing to answer any further questions apart from the following exchange:

Cong. Davis: “I thought you’re just a citizen? Why are you worried about the Communist Party?”

Citizen Journalist: “I shouldn’t be worried about the Communist Party?”

So is Davis’s lifetime achievement award, and subsequent speech at the Communist Party U.S.A. headquarters, something “just a citizen” should be concerned about? Is there no significance, as Davis suggests, in a member of the House Committee on Homeland Security’s gracious acceptance of this award? Further, why did President Obama suggest that Davis not only “was one of the greatest congressmen,” but also that he shares “our values”?

Further investigation into the nature of the award reveals that Chris Hani, one of the figures for whom Congressman Davis’s award was named, was an anti-apartheid activist and chief-of-staff in the armed branch of the African National Congress. Hani spent much of his life in exile from South Africa and received military training in the Soviet Union, returning to South Africa in 1990. In 1991, he took over the South African Communist Party, and in 1993 he was assassinated.

Like President Obama, Rudy Lozano, the other namesake of the award, was also a community organizer in Chicago. He was credited with bringing Latino voters to support the former mayor of Chicago, Harold Washington. Lozano was later shot to death in his home by Gregory Escobar for allegedly failing to pay off a $7,000 drug debt.

According to the Chicago Tribune, at a tribute event held at the University of Chicago for Lozano, “Richard Barnett, an aide on Washington’s mayoral campaign, said it was people like Lozano who built the foundation for Barack Obama’s historic run for the presidency.

It seems the groundwork of Lozano and Davis that Barnett spoke of did indeed play a role in advancing Barack Obama’s political career. And in 1996, New Party News lists both Obama and Davis as members of the far left-wing branch of the Democrat Party, the “New Party.” After working within the New Party, Davis had won his Democratic primary for U.S. Congress in the Illinois 7th District and Barack Obama had won his primary for Illinois State Senate. 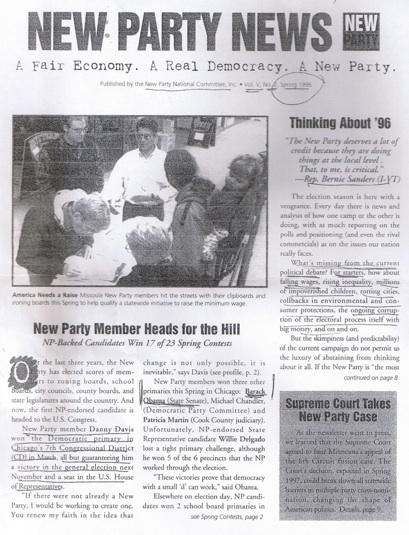 Davis and Obama seem also to have maintained a close friendship following their earlier years in higher offices, as is evidenced in a 2004 video of Danny Davis speaking to the Teamsters union.

Davis tells the audience that then-State Senator Barack Obama is someone they “oughta get to know” and proceeded to call Obama out on stage to address the crowd. Obama returned the favor, praising Davis as “one of the best congressmen in the whole country… because he shares our values.” Obama went on to name several values now recognized synonymously with “social justice.”

Given Obama’s effusive praise of Congressman Davis–and Davis’s connection with the Communist Party of Chicago–it seems we “oughta” take Davis’s advice and get to know more about both of these Chicago “New Party” radicals.