The Obama administration quietly released a new budget report Fridayafternoon at a time calculated to make sure it received minimalattention. The highlights of the new report are a pair of new estimates,the first of this year’s deficit and the second of projected debt 10years from now.

As reported over the weekend, the new Obama budget document lowersgrowth estimates for the current year to a (still) high 2.6 percent andestimates this years’ deficit at $1.2 trillion. That will bring our national debt to $16.2 trillion by the end of the fiscal year.

The more worrisome number in the new report is the estimated nationaldebt at the end of the current 10-year budget widow. Senator Sessions,ranking member of the Senate Budget Committee posted this chart of the anticipated growth of our debt. As you can see, we’ll be looking at over $25 trillion in debt by 2022: 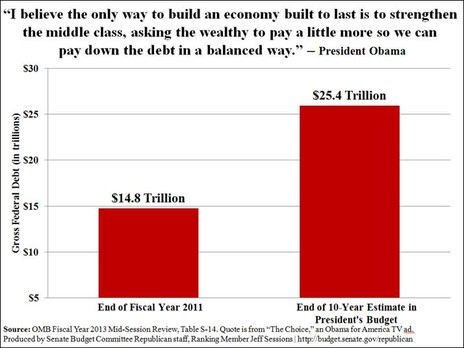 The budget items driving this are largely Medicare, Medicaid andSocial Security. Both Social Security and Medicare are currently payingout more in benefits than they take in. President Obama has on a fewoccasions, notably last summer during the debt-ceiling negotiations,suggested he would be open to modifying the programs but he has neverput a plan on paper. In fact, even during negotiations last summer,Obama never offered any specifics about how he would reign in spendingin these programs.

When Obama took office in 2009 he promised to slow the growth of thedebt by cutting the annual deficit in half. At the time he said “Wecannot and will not sustain deficits like these without end. Contrary tothe prevailing wisdom in Washington these past few years, we cannotsimply spend as we please and defer the consequences to the next budget,the next administration, or the next generation.” But the budgetdocument released Friday shows that Obama is doing exactly that.