You remember near the end of the Monty Python flick, The Meaning of Life— that scene featuring Mr. Creasote? He’s the morbidly obese freak who gorges on food, until finally, after eating a mint offered by the waiter, completely explodes, sending his guts in all directions.

I was a senior in high school when I saw it, and I remember it clearly. I skipped dinner that night.

And I remember the scene now, as I’ve watched this IRS scandal unfold. I keep thinking about that mint, and that this scandal is that mint. 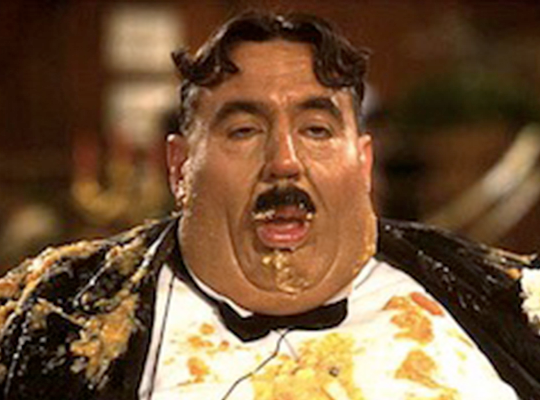 With this exposed plan of intimidation, big government has finally, irrevocably exploded all over us–drenching us in its own corrupt excesses. It’s gotten so fat, so immensely greedy, so impossibly grotesque, that the only thing that can end it is itself.  Big government exists only through expansion. The bigger it gets, the harder it is to kill. But it got too cocky; it grew too fast, and now all of its insides, are outside–for all of us to see.

Which is why this is no time to lend it a helping hand. Let big government die from its own desires. The IRS, to its own horror, has just helped create a new movement. Think about it: If you were to go to a hardware store right now, buy a sign and paint “audit this,” and place it on your lawn, what could they do? Nothing. Once you’ve got a thug’s number, the thug knows better than to target you.

Nevermind the appeasers–the IRS scandal IS a big deal. It’s such a big deal, it could ruin the agency forever, and take a few others down with it. And sure, it’s a lot of fun on the right to be clamoring for scalps–like, who should be fired and how many. But pink slips are small potatoes.

The end game is way, way bigger than that stuff. What we are witnessing is a collapse of trust in big government, which ultimately–to our benefit as small-government types–leads to a permanent undermining of the whole system.

Until now, this administration produced loads of soaring rhetoric that made many forgive its lack of substance. But now, to everyone who pays taxes, the wolf is suddenly at the doorstep, and it’s looking for food. This new era, for some, sounded great in the abstract–but with the IRS scandal, we’re starting to see our first home front casualties. The IRS just gave small-government America–which is most of America–a wake-up call like no other.

The IRS scandal, if perceived correctly, spells the end of big government.

Because a group of average Americans mobilized as something delightfully known as the Tea Party, and made their voices heard for the first time, they were targeted. It’s not about the IRS solely, but an administration that used the IRS as its enforcement arm against speech it found disagreeable.

They used the government to silence opposition. The IRS was their national muscle, used locally, to scare the crap out of you. They’re so powerful, they don’t even need to break your kneecaps. They just break your soul.

And it used to work–but not so much anymore.  I’m thinking (which I do now and again) that if everyone now does what those brave folks did when Obamacare first reared its ugly head, what exactly can the government do now?

If the IRS is forever tainted as an agenda-driven, ideologically poisoned outfit, then it’s powerless to continue its normal routines. It’s like a shoplifter in the neighborhood. With his photo now plastered in every shop window, everyone knows his game, so he’s gotta go somewhere else.

The only recourse: going after the left. Or, just going away.

When I talked about grounding government, this is how it’s done. The IRS, through its actions, has grounded itself–disqualifying the joint from effectively coercing you to do anything without that being perceived as targeting. When President Obama said cynicism is a threat to democracy, he was looking through the kaleidoscope from the wrong end. It’s corruption that threatens big government. When, during that speech on drones, he defended his use of targeted lethal attacks on enemies, he could have just as easily been describing the IRS attacks on the right. This strategy is part of who they are. If you’re a big government lover, you are programmed to hate us and any person who threatens that cushy livelihood.

Which is why you should become that person. Doing so creates a force field against attack. When Elijah Cummings fretted that the IRS scandal could endanger future audits against citizens, it was a selfish, bizarre reaction to government overreach (siding with the attacker, not the victim)–but he was also right.

The IRS just dug big government’s grave. America now has the opportunity to look at the greedy monster that is expansive, progressive government and say, “We are done with you. Go away.”