NYPD Cop killer Ismaaiyl Brinsley was using a traffic app called Waze to track law enforcement’s movements, NYC Alerts tweeted on Monday.  According to an available screenshot, Brinsley was tracking two officers who were almost 4 miles away from him in Staten Island at 10:44 PM EST since the beginning of December. He thanks a friend of his on Instagram for pointing out the app is not “updated in real time” so it’s not that “reliable.” 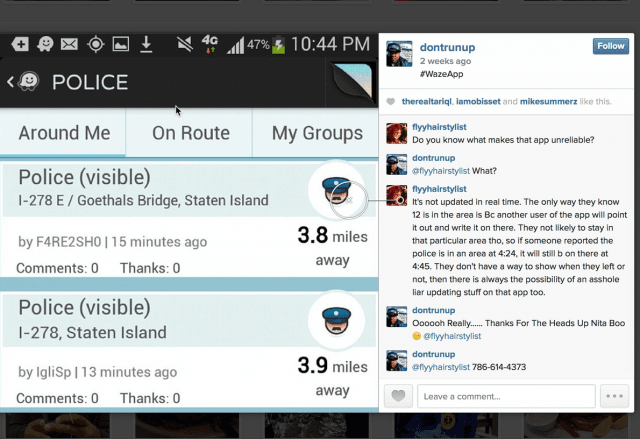 Smartphone applications monitoring police activity have grown in popularity over the past few years due to decreased cost, portability, and accessibility to average citizens.

Some legal scholars debate that even listening to a police scanner radio in some states may not be legal for a private citizen.  In the meantime, other police-oriented apps for citizens take it one step further.

One particular app, for example, called “Surrey Police” tracks a British police department’s movement in the UK. Gizmodo calls it “well intentioned” but states that the app is “supposed to give residents a sense of security—and also a heads up—about when there’s a crime being committed in the area, and how the police are responding. But come on, people! Has no one seen any crime movie ever? This seems like it will be of limited-if-any use to the public at large, and an unbelievable boon to the unsavory folk of Surrey.”