The Cuban dictatorship has long had its fans on the left—those who see in the Castro regime a plucky, multiracial workers’ utopia, whose advanced medical system is proof alone that it would thrive absent the bullying of the United States.

For them, the many horrors of totalitarian rule—the suppression of dissent, the torture of political prisoners, the arrests of journalists, the export of terror, and the persecution of gays—are either capitalist propaganda, or an acceptable price.

For half a century, it has been common to see the iconic image of Ernesto “Che” Guevara on the walls of college dormitories, among students who know little of the life of the brutish, racist, misogynistic playboy-turned-guerilla.

It is somewhat more unusual to see his image, and that of Fidel Castro himself, affixed to the exterior walls of apartment buildings—except in the left-wing haven of Santa Monica, California, affectionately known locally as the “People’s Republic.” 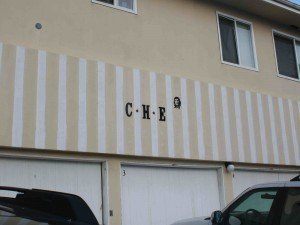 Meet Jay Johnson and Rachel Sene, who own an extensive real estate portfolio in the city, and who have decorated their rental properties with icons of the Castro regime. They were also local leaders in the movement to free the “Cuban Five”—the convicted spies who President Barack Obama just traded to Cuba for American hostage Alan Gross. (One of them was convicted of conspiracy to commit murder for his role in Castro’s downing of civilian aircraft trying to help Cuban refugees.)

Johnson and Sene—it will perhaps be no surprise to learn—are also leaders in the Democratic Club, the local branch of the Democratic Party. The Santa Monica Democratic Club plays a critical role in many local and state elections: its endorsement is highly coveted, and often decisive. And yet it has, as its leaders, two (presumably) wealthy, property-owning individuals who are highly enthusiastic about a communist regime that allows no real elections or private property whatsoever.

It seems not to have occurred to Johnson and Sene that if they actually lived in Cuba, their buildings would be expropriated by the state, with the bulk of their wealth siphoned into the bulging pockets of corrupt communist party officials. (Johnson and Sene could not be reached for comment Monday, as they are currently in Cuba.) They also seem quite unabashed about the many murders and other human rights violations attributed to the Cuban “heroes” whose profiles adorn their buildings.

The west has always had a higher tolerance for communist dictators than for other kinds of tyrants, perhaps because communists are presumed to mean well. The U.S. boasts a few Soviet-themed bars, for example, including one near Harvard University, my alma mater, which bears the name “People’s Republik” (in a rather non-ironic way).

My personal favorite, however, is Red Square in Las Vegas, which features a decapitated Lenin statue, appropriately adorned with pigeon poop.

Senior Editor-at-Large Joel B. Pollak edits Breitbart California and is the author of the new ebook, Wacko Birds: The Fall (and Rise) of the Tea Party, available for Amazon Kindle.